Pictures from the Brainbox: A Weekly Dose of Indie Animation - 'Half Wet'

Sophie Koko Gate takes us quickly behind the scenes of her 2014 student film, 'Half Wet', which delves into aging, mortality, a failing relationship and, perhaps, a banana. 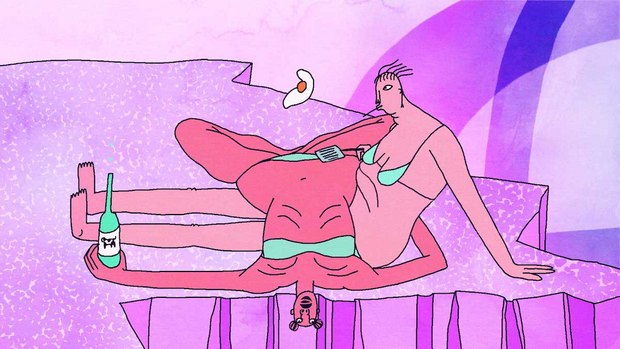 Originally from Bath, Sophie Koko Gate studied animation in London at the Royal College of Art (RCA) and had international success with her graduation film Half Wet. She now works from her studio in London, where she has directed animation for clients such as MTV, The Guardian, Airbnb, Vox, Lena Dunham and Harvard University. She has given talks at universities and festivals around the world and screened films at over 100 festivals.

Sophie kindly agreed to say a few words...and I do mean a few... about her graduation film, Half Wet (2014), a fragmentary piece of absurdist dream poetry that deals with the importance of water, the necessity of aging, the inevitability of death and a shitty relationship.

This was my graduation film and I spent way too much time thinking about it rather than doing it. Time ran out. The pencil tool in photoshop is cool you can just draw click and fill all on 1 layer. none of this fannying around with shading or trying to make it look like it’s not done on a computer. In the end the time limitations forced me into a style that suited me.

8 months, 3 of them being the animation and designing.

Starting production - I make my films without animatics and I tend to animate and design chronologically bit by bit, so starting the first scene is always daunting and never makes the cut when I’m editing.

How does the finished film compare to your original vision?

I was originally going to make the film all in 3D hahahahaha. What a laugh.

That the protagonist is a man.

Yes. Thanks for asking!

You can also read a tad more about the origins of Half Wet here.

Half Wet from Sophie Koko Gate on Vimeo.