Keep it in Motion - Classic Animation Revisited: 'Something Left, Something Taken'

Every Wednesday, Chris Robinson takes a look at short animation films. Today, a look at 'Something Left, Something Taken' (2010), the first film by 2018 Oscar nominees, Max Porter and Ru Kuwahata. 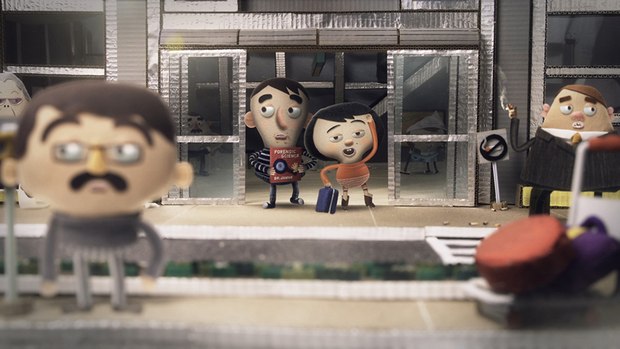 'Something Left, Something Taken' by Ru Kuwahata and Max Porter

The 2018 Oscar nominated duo of Max Porter and Ru Kuwahata (Negative Space) first landed on the festival circuit with, Something Left, Something Taken (2010), a charming and innovative comic mystery (in the spirit of Woody Allen’s Manhattan Murder Mystery) about a vacationing couple (named, coincidently, Max and Ru and based on the couple’s own experience travelling to a film festival in San Francisco) who begin to suspect that their mysterious driver might well be the notorious Zodiac killer.

Using clever mixture of handmade objects (felt, cardboard, rope) with a playful comic tone, Something Left, Something Taken, is, at its core, a portrait of our sometimes paranoid tendencies when we see things only in a certain way. It’s also about a disconnected couple. Max is, an obsessive, neurotic type whose fixation on a forensic analysis lecture turns him into a bit of a paranoid wreck. Ru, meanwhile, is fussier, orderly and focused on savoring sights and sounds of San Francisco. There is a definite, albeit minor, fracture between the couple.

However, when Ru also starts to believe that the driver might well be the murderer, it brings the couple closer, physically and emotionally. Ru immediately takes an avid interest in all that Max knows about forensic analysis as the two imagine what it would be like to be murder victims. While their imaginings about the driver turn out to be way off, Max and Ru become closer and more aware and engaged with each other.

VFX is the ‘Thing’ for Tom Turnbull on Tim Burton’s ‘Wednesday’
We Need to Chat
Choc Chip Animation Riffs on Pop Culture in ‘The Art of Murder’
F is for Flake: The (Not So) Great Animation Robbery?
Re-VIEW: ‘Avatar: The Way of Water’ – A Miraculous Vision
‘Kung Fu Panda: The Dragon Knight’ Celebrates a Special Lunar New Year
END_OF_DOCUMENT_TOKEN_TO_BE_REPLACED