‘Back to the Moon’ VR Doodle Celebrates Georges Méliès 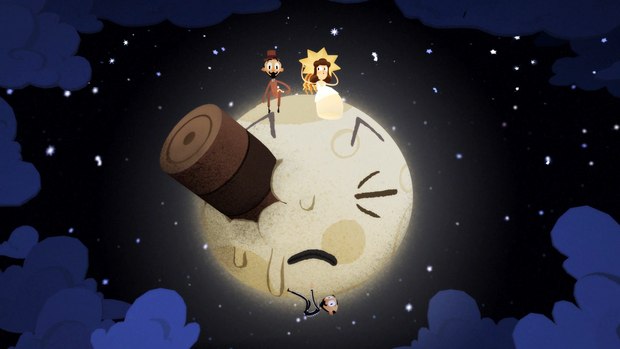 “My friends, I address you all tonight as you truly are; wizards, mermaids, travelers, adventurers, magicians... Come and dream with me.” —Georges Méliès

Google Spotlight Stories has just unveiled an exciting new project -- an interactive 360/VR Google Doodle called Back to the Moon, celebrating the artistry of the trailblazing French illusionist and film director, Georges Méliès. The project, which is already live in some terretories, launches in the U.S. tonight at midnight EDT.

A charming illusionist, an adventurous queen of hearts and an evil green man journey through early cinema, film magic and love in this latest interactive experience. A massive collaboration between the Google Spotlight Stories, Google Arts & Culture and Cinémathèque Française teams, Back to the Moon celebrates Méliès on the release date of what is considered to be one of his greatest masterpieces: À la conquête du pôle (The Conquest of the Pole, 1912). Méliès pioneered numerous technical and narrative film techniques in the early days of cinema, primarily in the use of special effects and creation of some of the earliest films of the science fiction genre.

Leroux has been working with the Google Doodle team for about two-and-a-half years, where every year artists are encouraged to pitch ideas for people or events they think have had a positive impact on the world and would be a great subject to share on the Google homepage. “When I pitched the idea to make a Doodle for Georges Méliès during the Summer of 2017, the Doodle team got excited about the possibility of using a new medium for it,” Leroux recounts. “Georges Méliès was a pioneer back in 1900 using the technology he had to push and invent a complete new form of visual storytelling, and creating the very first films of fiction by inventing dozens of camera and film tricks. It seemed obvious that using our latest technology in terms of storytelling (VR) was an appropriate way of giving homage to one of the greatest cinemagician who has ever lived.” The Doodle team reached out to the Google Spotlight Stories team to collaborate on what would be the very first VR doodle. “As I was starting to set the basics of the world and story, they reached out to the London-based production company Nexus Studios and Fx Goby (who I worked with in the past on a handful of pitches!) to gather a team to be able to produce the whole idea. It was great to work with them as they had previous experience in creating animated VR short films and were aware of all the technical challenges,” continues Leroux, who notes that the entire process took roughly six months, with one month for story and design development, three months for production, and the remaining time used for technical adjustments and fixes.

“I was involved on a daily basis, supervising the production with Fx,” says Leroux. Aside from technical issues, “the biggest artistic challenge was the storyboarding phase and how to approach storytelling that happens 360°around you. You have to suddenly work without frames or cuts which are the basis in cinematography language to tell a story. It quickly became obvious we had to define clear layers of storytelling -- one main action to follow, secondary actions in the back, and third loopable actions all around.”

For Goby, making Back to the Moon was a very special experience that allowed him to create something both entertaining and educational. “Méliès is one of my personal heroes, and being able to pay tribute to him in such a visible way is a rare opportunity. Working with film lovers and film enthusiasts such as [Google Spotlight Stories creative director] Jan Pinkava is a blessing,” he says. “They care, nurture and never impose their views, which creates the best possible environment to make a film!”

Goby first became involved in the project when the Doodle and the Google Spotlight Stories teams chose to partner with Nexus Studios on the film. “What is funny is that nobody involved at this stage knew that Hélène and I were close friends with many collaborations in the past, so it was very natural and easy for the both of us to team up then and make this film!” he says.

Designing for VR presents its own set of problems that make every project unique. “It can be quickly overwhelming because every decision has multiple implications,” Goby cautions. “But because I have made so many other films before I decided to approach it first like a film. Story first! So we worked on a main storyline that would be the foundation to build on. Then we started to add layers. We mapped out our set from a top view and created zones to know where actions would happen at any time and define how the experience would unfold for the viewer. It is complex but we had a technical and artistic team that had previously worked on another Google Spotlight Story, Rain or Shine, and we certainly benefited from their deep knowledge in how to approach that beast.”

“The story is set in a toy world so it was very important for the assets to adjust to this scale -- meaning no small details in the design -- so the idea was to keep a ‘toy’ approach to the characters through simple shapes and big eyes to be able to follow the expressions,” Leroux notes. “We loved stop-motion animator George Pal as a reference for his charming squash and stretch animations and wanted to keep that humoristic and playful approach.”

The team used references from the very first colored versions of Méliès’ film to develop the color palette. “Back in the day, in order to add colors to a film they would paint every single frame of the film strip!,” Leroux explains. “This is why you see some strong dominant colors in some shots (yellow, cyan or red, for instance). We really wanted to keep that approach in the different scenes of the film (dominant of cyan for the underwater world, of yellow for the romance scene, of red for the devil scene).” Like any VR project, Back to the Moon came with its own creative restrictions. “Restrictions are many, and the most frustrating ones are that we give away our control over frame and timing. Viewers can look wherever they want and break the flow of the show if they want,” says Goby. But these restrictions also become a strong source of creativity. “How can I guide the eye of the viewer from point A to B without losing their focus? How can I make them discover how big the world is around without distracting them from the main storyline, and how can I make it flowing if they don’t follow any of my attempts to guide them?” he asks. “In the end we are closer to immersive theatre where the audience is right in the middle of the scene, and the limitations we have are quite similar! We just have to deal with new codes and tools to tell stories, and I love those restrictions; they prevent you from repeating yourself!”

For Leroux, it was an immense pleasure going through all the work, research and dozens of films of Georges Méliès. “At Google I was aware that the Google Arts & Culture team had created content around him through the great French cinema museum La Cinematheque (which had an exhibition a few years ago on Georges Méliès which I went to and loved) and got in touch with them,” she recounts.

The Arts & Culture team helped set up meetings with the Cinematheque director and world Méliès expert Laurent Mannoni to have a better insight on the subject. “It was amazing to see and discover all the sketches Méliès did!” Leroux enthuses. “Méliès drew and painted all of his assets in all his films, and the idea was to really keep that ‘handmade,’ organic and textured approach to all the designs. Back in 1900, the art was very ornamental and it was important to keep that aspect of it while trying to simplify it to make it read in VR. The team did a great job at adapting the drawings into 3D models.”

Learn more about the project on the Google Doodle blog, and in the making-of video below: