I Have a Question Vladimir Leschiov

Latvian hockey superstar Vladimir Leschiov steps away from the ice to tackle some hardcore questions about the decline of civilization, japanese art supplies, and the time Jimmy Page tackled Freddie Chopin at an airport. 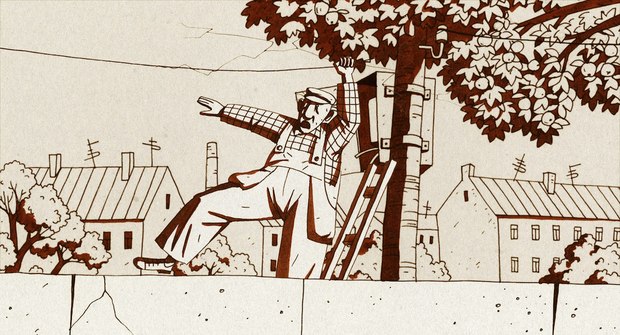 Vladimir Leschiov was born in Daugavpils, Latvia. After graduating from the J. Rosenthal Riga Art School, Leščhiov pursued an animation degree at Sweden’s Konstfack University College of Arts. During his studies, Leschiov made Grandad’s Honey (2002), a striking and tender film about a lonely old man living out the last days of his life.

In 2007, Leschiov founded his own animation studio, Lunohod. The studio’s first production was Wings and Oars (2009). More recently, Leschiov teamed up with Estonian animator, Kaspar Jancis to create Villa Antropoff (2012). The film was nominated for the prestigious European Film Award. He followed that up with Rainy Days (2014) and Waiting for the New Year (2016). Leschiov’s latest film, Electrician’s Day (2018) is currently making the rounds in Annecy, Zagreb, Hiroshima and other fine drinking establishments.

He agreed meet me in the old part of Montreal on a bitterly cold day in late January. We drank beer, ate Chinese people and dreamt of ice tunnels whilst pondering the dicey future of the Montreal Canadiens. It was a Sunday. The time was then, not now.

I get the greatest pleasure from everything that brings me joy and satisfaction, like a cold beer after a midnight hockey game.

The name of my autobiography would be An Animated Still Life with Skates.

My most beloved possession is handmade artist’s supplies, especially Japanese calligraphy brushes, ink sticks and rice paper. Because these materials are an artwork itself I feel that I am not ready to use them.

A (non-family member) person I have high respect for is Dalai Lama. The song that makes me tingle is depending from mood in current moment. Right now (due to my flight from Warsaw to Zagreb has been cancelled) Chopin’s Prelude no.4 in E minor performed by Jimmy Page while smoking a cigarette on stage.

The funniest thing that happened to me was during my studies in Sweden. I didn't get time to buy a beer for a party, so I brought a bottle of very bad and cheap Russian vodka with me. Since nobody responded positively to my invitation to share vodka with me I drank it myself. The whole bottle, 0.5l. I got completely drunk. On my way to home, I found an abandoned, and probably previously stolen, bicycle in the park. I must admit that It was not an easy and pleasant ride. I was too tired and drunk to use the railway tunnel located hundred meters away, so I crossed rails directly, falling down permanently. Next morning, I woke up with pain in my ass (headache too) and found a huge hole in my brand new pants. On my way to school I found this bike… it was familiar to me. I was surprised to see that the bike has no seat and half of the handlebars...

I’d like to be remembered as a tall long-haired man with a snow white mustache.