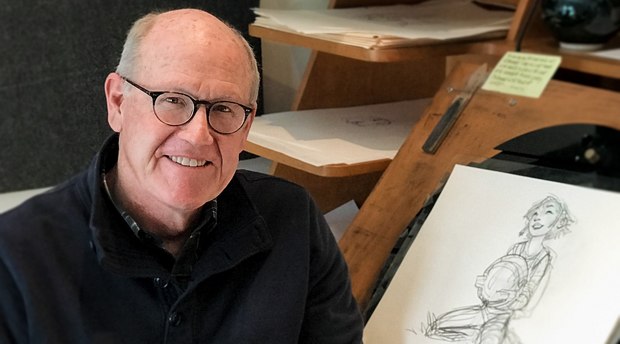 One of the big highlights of this week’s Annecy Festival was the Studio Focus Session for the newly-launched Pearl Studio, which has burst onto the scene with two new animated features currently in production and more than a dozen projects in development.

The packed session had people lining up hours in advance with the hopes of catching a glimpse of Oscar-winning director Glen Keane, who, as previously announced, is helming the studio’s forthcoming Over the Moon, which will be distributed by Netflix in 2020. Also in production with partner DreamWorks Animation is Abominable (formerly known as Everest), directed by Jill Culton and arriving in theaters next year. Meanwhile, Kung Fu Hustle director Stephen Chow has been tapped to develop the forthcoming The Monkey King.

Studio head Peilin Chou kicked off the session, outlining the mission and plans of the Shanghai-based studio, which was previously operated as a joint venture known as Oriental DreamWorks, and which co-produced the first American-Chinese animated co-production Kung Fu Panda 3 in 2016. “DWA will always be a part of our DNA as we co-produced Kung Fu Panda 3, which at the time of its release was the highest grossing animated film of all time in China,” she noted.

Chou explained that the studio’s goal is to produce one animated feature film a year, operating as a creative hub with production outsourced to studios around the globe, and described the studio’s core mission to be “a premier family entertainment brand, creating original world-class films that enchant, inspire and awaken audiences around the globe.” Based in what is now the world’s largest film market, Pearl Studio will seek to incorporate Chinese elements in its films, but only as dictated by the stories they tell, according to Chou. “China is at the core of who we are, but it’s not a mandated agenda in our movies,” she said. “We do incorporate Chinese elements into our films when it’s organic, but only when it enhances the storytelling,” she commented. “What is a mandate for Pearl films is to be hyper appealing/successful in China. Earlier this year, China officially became the largest theatrical BO market in the world. So, Pearl’s strategy appeal and make movies work in China should be a primary goal and good strategy for any company.”

She also discussed the advantages of being a Chinese company, saying, “We have roots on the ground in China which gives us unique insight and a deeper understanding of the market, as well as how to appeal to China and its rapidly growing and constantly evolving consumers.”

“Our films are for family audiences,” she continued, “our target is around the globe. We want to be original. We want to be inspiring, we want to awaken our audience.”

Chou also explained that diversity is a central principle for Pearl Studio. “We don’t consider diversity an initiative -- diversity is the core of who we are,” she stressed. “In our Shanghai headquarters alone, our staff is from over 25 different countries. On our current development slate, the majority of our protagonists are female, we feature non-traditional families, and every single one of our projects are multi-cultural either on screen, or in the make-up of our filmmaking teams -- or both. We didn’t undertake an initiative or strive to accomplish these things, it happened organically because it is the heart of who we are as a company,” she said.

“Our goal is to produce films that reflect the world as it really is and promote global citizenry,” Chou continued. “We do this in a way that is entertaining and fun. it never feels politicized, agenda-filled, or preachy. We call this #sneakywoke.” Director Jill Culton (Open Season) next took the stage to give a first look at the forthcoming Abominable. Considered to be among the first female pioneers who helped to further the medium of computer feature animation, Culton, is perhaps best known for her work at Pixar, where she was responsible for the design of Jessie in the Toy Story franchise, and also served as head of story development on Monsters Inc.

Culton emphasized the need to draw from one’s own experiences to tell meaningful stories. “I heartily believe that everyone in this room is a storyteller. It’s our god-given right to tell stories,” she said. “If you make up a story it’s never going to be as successful as drawing from your own experiences.”

Abominable stars Everest, a 2,000-pound yeti who is curious and playful. “One of my main challenges was to make a lead character without language,” Culton noted. The film, which will be released September 27, 2019 by Universal Pictures, will also feature the voices of Chloe Bennett, Tenzing Norgay Trainor, Albert Tsai and Tsai Chin.

The session ended with the presentation of Over the Moon, a musical inspired by one of China’s most beloved myths. A co-production with Netflix that will premiere globally in 2020, the film is directed by animation legend Glen Keane, who took the stage to thunderous applause. He shared personal stories of his career and his collaboration with Pearl on Over the Moon, including a recent trip to China.

“It’s all about passing on what we’ve been given,” Keane said, recounting anecdotes from his years at Disney and mentorship from animator Ollie Johnston. He also shared a live drawing of Over the Moon’s main character, Fei Fei, as well as clips from his trip to China, where he observed local traditions including family meals and a tea ceremony.

He also described his “reverse mentorship” with production designer Céline Desrumaux, threw in a Pink Floyd reference, and gave out some advice: “If you’re going to make a mistake, don’t do it in the eyes.” ‘Over the Moon’ director Glen Keane’s favorite pencil and a sketch of Fei Fei.