I Have a Question Priit Tender

In which Chris Robinson asks animators profound and inane questions that have little to do with animation. This week's guest is a deeply troubled Estonian person allegedly named Priit Tender 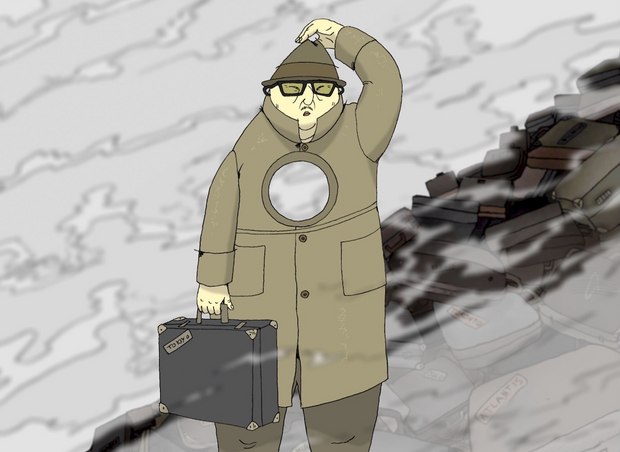 The great Priit Tender is the man behind many popular Estonian country hits including: “Hoian unustades, et ma unustasin teile” (I Keep Forgetting I Forgot About You) and “Ma olen nii õnnetu ilma sinuta. See on nagu sa oleksid siin” (I'm So Miserable Without You; It's Like Having You Here). He also made some funny cartoons (Kitchen Dimensions, House of Unconsiousness, Mont Blanc). He is also a noted tuba player.

Equipped with 26 mini bottles of Viru Valge, Mr. Tender and hooked up on the Estonian island of Saaremaa during a particularly a humid April evening.

On days where I have no plans and start to feel restless, no matter where I am living at the time I step out of the door and take long walks. I have no  plan for the walks, no destination or route in mind, I just go. Having no plans allows for the serendipitous. Maybe the sky will be a color I have  never seen it before. Maybe a strong and freezing gust of wind will hit me in the face and make me feel alive. Maybe I’ll see a family of deer and  share a moment with them. One day in particular when I was taking one of  these walks, I discovered my entire neighborhood was swarming with birds.  The college campus I lived by at the time must have served as a rest stop during a migration, because every tree in the 30-acre wooded area was filled with these birds, for just that one day. There was cacophony - I  couldn't even hear the sound of the cars passing because the calls of these birds seemed to absorb all other noise. It was Hitchcockian, it was  unexpected, and although I feared slightly for my life it was somehow glorious to see so many of one thing, to witness this ritual of mass  movement.

I think that to obtain a nom de plume you have to have an obtrusive personality, and as it has been my goal so far to take up as very little space in life as possible, I can’t think of any nickname that someone would be inclined to give me. Sorry.

When I was in high school I ran cross country. I was on the junior varsity team, and by a decent margin I was the slowest member. We were the Redwood Giants, and by “giants” I mean trees - I grew up in was a well forested coastal county, and we were so proud of the giant Redwood trees native to our lands that we made them our mascot. I loved to run but I hated the competition. During the meets, where we would compete against other high schools, I always pretended I was the only one on the mountain paths we ran. That way the steep hills, the loose and rocky ground beneath my feet, and all the winding trails between the trees became something pleasurable for me, rather than an obstacle. I paid no attention to all the people passing me, and used the 6 mile runs as a time to meditate.

Louise Bourgeois - one of my favorite artists of all time and an icon for any woman who has to navigate the art world. She carved out her own space in it, making groundbreaking work. As a woman, it is extremely difficult to push your work past the notion that it is just “woman’s art”. Louise managed to take charge of her own narrative while remaining somewhat elusive to the public. Her work, which is often made from sturdy industrial materials like steel as well as materials that are often viewed as feminine, such as fabric and yarn - speak to an inner contradiction found in the woman. Beneath the veneer of softness is violence and anger. The sharp, jagged, domineering silhouette her spider sculptures create is as just as much a part of her, a part of US, as are the woven sculptures of the pregnant female figure. I look up to her because she has found a voice, and speaks it without holding back.

“I’m New Here” by Bill Callahan. Not too long ago, my sister and I drove four hours away from our home in San Rafael to a venue in North Fork called “Bandit Town”, which was a recreational space made up to look like an old west style town; complete with a barn, saloon, and general store. We pitched tents outside the barn. Bill was the headliner that particular evening, and the reason why we drove so far from home. Me and the other members of the audience were seated cross legged on the floor, and Bill only had an acoustic guitar to accompany him. When he started to play I felt imbued with a feeling of true comfort, the feeling I get when I am seated around a table with my closest friends, talking about nothing in particular but enjoying the warmth of the atmosphere, the softness of the light, and the simplicity of our conversation. When he played “I’m NewHere”, a subtly poetic song that to me is about feeling untethered in life, I fell in love a little bit, maybe just for a moment where he sang the lyrics:  “No matter how far wrong you’ve gone / you can always turn around / turn around, turn around, turn around / and you may come full circle / and be new here again”  My sister laughed at the expression on my face as I looked up at him - and then I laughed too. Maybe it’s best not to be so captured by musicians.

Two years ago I was in a relationship with a manipulative, narcissistic man. The relationship was short but it made me miserable for a very long time. Having sex with this guy was never enjoyable, but at the time I didn’t know it and just went along with everything. One evening, things were “heating up” between us, and before we started making love he asked if I was still on my period, because it was around that time of month. I didn’t think I was, so I just said “No.” We proceeded, and after about two minutes he pulled out, making a sound of disgust. I had bled not only over him but also all over his expensive high thread-count bedsheets. I spent the rest of the evening in the shower scrubbing those sheets with soap. At the time I was mortified, but in hindsight it’s quite funny because that asshole totally deserved to get menstrual blood on him, at the very least.