Pictures from the Brainbox: A Weekly Dose of Indie Animation - 'Wings and Oars' 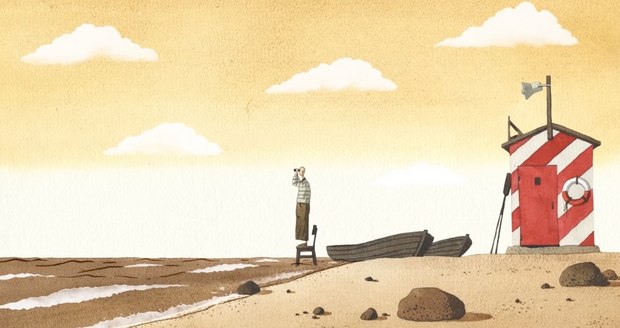 'Wings and Oars' by Vladimir Leschiov

“I see it all clearly;” said Kierkegaard, “you have two choices — you do this or you do that. I say whether you do it or don’t do it, you’re fucked.”

Okay, that’s not quite what Kierkegaard said. My memory is a bit fuzzy that way. In essence he was saying that you’ll regret whatever you decide or don’t decide. He should know. He had love but walked away from it so that he could just live his own life free of obligations. It haunted him for the rest of his short life.

Maybe you initially dreamt of being a pilot, soaring freely about the clouds at the mercy of no one, no thing…. And then from out of the clear blue sky maybe love beckoned and the next thing you know, you’re anchored, adrift near the sea, living a life unforeseen. That’s when the mind drifts back. What if…what if …. What if?

Looking back. It can be good.

How can you fully comprehend the present without at least contemplating the past?

I guess it depends what you’re looking for. If it’s just nostalgia. Well, yeah, there’s no real point.

The past becomes an absence, a place gone.

Memories are fragmented and blurry, like jump cuts in a Godard film.

In mere minutes, Vladimir Leschiov’s Wings and Oars (2009) propels us through a life. We are never settled, never sure of where we are or who they are. Are these women the same person? Have the young couple who once hoped to soar now become the older people adrift in a lighthouse by the sea? Did love kill their possibilities? Can we not have our individual dreams and love at the same time? Or is this merely an ode to lost youth, to a world and a life that’s passed by more rapidly than a summer breeze?

Spārni un airi / Wings and Oars from LUNOHOD on Vimeo.

Brad Neely Channels his Arkansas Childhood in ‘The Harper House’
Playing a Deadly Board Game of War in Iron Maiden’s ‘Stratego’ Music Video
Patrick Osborne Takes Billie Eilish on a Dreamy Iconic LA Tour
Cantina Creative Helps Turn the Hands of Time in ‘Loki’
Paul Lasaine Talks the Not So 3D World of ‘What If…?’
‘Twenty Something’ Plumbs Adulthood Insecurities… in a Good Way
40 Years in the Making: ‘The Smurfs’ Return to TV
Defying the Laws – or Mere Suggestions – of Physics in ‘F9’
END_OF_DOCUMENT_TOKEN_TO_BE_REPLACED