I Have a Question Veljko Popović

Veljko Popović - the inspiration for this ingenious interview series - takes a break from touring his nifty new film, 'Cyclists', to tackle some serious questions about existence. 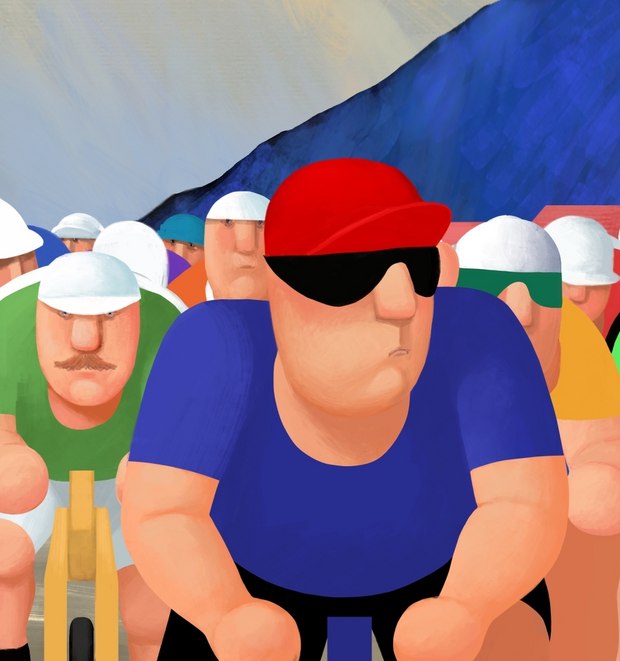 Veljko Popović was taught in Zagreb by Đ. Eisenhutha, and from 1871 at the Vienna Conservatory, where he graduated with great success in 1875. In the eighth year he performed for the first time and started composing in the ninth. Since 1879 he has been a concertmaster in orchestra Benjamin Bilsea. Critics evaluated his play as temperamental, fresh, graceful and extremely virtuous.

Mr. Popović agreed to meet me on the shores of Split where we played on tiny instruments, talked of seagulls and buffalo springs that drifted towards the shores of tabasco. The date was May 13th. The year was not yet known. The weather was like a soft orange.

I get the greatest pleasure from writing my Oscar accepting speech

The name of my autobiography would be Wow, what a great guy!

My most beloved possession is my AR-15 rifle!

A (non-family member) person I have high respect for is Mike Kloppenburg. He recorded the triangle solo for Hazel Scott's debut album. What an inspiring performance! Pioneered the use of the pinky to control the resonance of the triangle. Should have won a Grammy for that. The funniest thing that happened to me…. Farts. Just general farting sounds. So many situations to choose from…Maybe the elevator incident when this girl farted and I wanted to fart as well to reduce her embarrassment but instead of farting I shit my pants. That was funny as hell!

I’d like to be remembered as the guy who went to pick up his “LET 3” concert tickets butt naked cos he was told they were giving away free tickets to anyone who picks them up in the nude.

Tags
Interview
Humour
Satire
Not Fucking Serious People
Lemonade 3D
Cyclists
Planemo
Veljko Popović
More From ANIMATIONWorld:
Next Post
Pictures from the Brainbox: A Weekly Dose of Indie Animation - 'Half Wet'Previous Post
Keep it in Motion - Classic Animation Revisited: 'Things Don't Fit'
Related Content
I Have a Question Steven Woloshen - The Sequel
I Have a Question Priit Tender
I Have a Question Kaspar Jancis

Dude! - ‘Rise of the Teenage Mutant Ninja Turtles: The Movie’ Arrives
‘Super Giant Robot Brothers’: A Milestone in Virtual Animation Production
‘Luck’ Aims to Bring Hope to Kids In and Out of Foster Care
Pre, Tech, and Post: The Many ‘Vizings’ of ‘Chip ‘n Dale: Rescue Rangers’
Hammering Out the VFX in ‘Thor: Love and Thunder’
‘DC League of Super-Pets’: A Family Film Produced by a Family
‘Light & Magic’: ILM’s Story of Family, Fun, and Pioneering Visual Effects
Eric Goldberg and Mark Henn Talk the Magic of Hand-Drawn Animation
END_OF_DOCUMENT_TOKEN_TO_BE_REPLACED