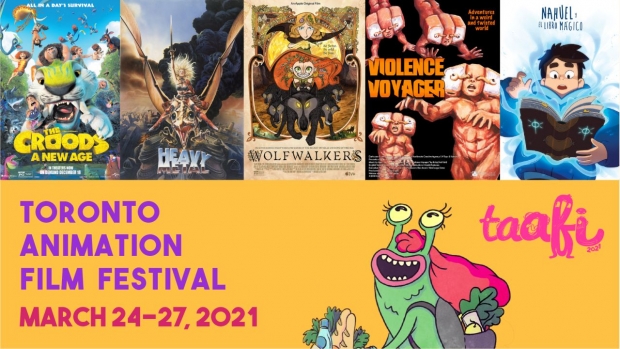 The Toronto Animation Arts Festival International (TAAFI) has announced the full lineup for the 2021 program. It will feature the Apple TV+ animated original Wolfwalkers, Germán Acuña’s Nahuel and the Magic Book, Ujicha’s Violence Voyager, and a special screening of Sony Pictures’ classic Heavy Metal, followed by a Q&A with director Gerald Potterton.

“While the 2021 Toronto Animation Film Festival will be taking place in a different environment, we planned this year’s festival with work from all over the world, in addition to classic hits that will unite our community filled with animation enthusiasts, moviegoers, and TV fans,” commented TAAFI co-founder and chair Barnabas Wornoff. “This year, we’re so excited to share that multiple filmmakers and artists will join us in sharing this virtual film festival journey with you.”

The final instalment in directors Tomm Moore and Ross Stewart’s “Irish folklore trilogy” is a stunning testament to their singular animation style and storytelling skills. With visual references to pre-Celtic imagery and Studio Ghibli alike — and some catchy songs — Wolfwalkers is an instant classic for all ages.

Nahuel And The Magic Book (99 minutes)

Nahuel lives with his father in a fishing town, yet he has a deep fear of the sea. One day, he finds a magical book that seems to be the solution to this problem, but a dark wizard is after it and captures Nahuel’s father. This is where his fantastic adventure begins: to rescue his father while overcoming his deepest fears.

For his three years in the making follow-up to The Burning Buddha Man (2013) director Ujicha again employs a blend of animation and manga called “geki-mation,” creating grotesque body horror nightmare imagery from painstakingly detailed, hand-painted paper cut-outs. Chock-full of B-horror, sci-fi and kaiju film references, this blood-soaked late-night flick is not for the kiddies.

Based on the sexy science fiction cult comic, Heavy Metal combines stunning visuals, new wave music and a series of mind-bending stories in a unique motion picture experience. The anchor of the film is an eerie green ball that magically transports us into a series of adventures in the past, future, and into the world beyond. This groundbreaking animation extravaganza also use the voices of John Candy, Harold Ramis, Eugene Levy and Joe Flaherty, as well as writers, directors, and artists from around the world.

The Croods have survived their fair share of dangers and disasters, from fanged prehistoric beasts to surviving the end of the world, but now they will face their biggest challenge of all: another family. Including a Q&A with director James Lopez

In this behind-the-scenes look, Hullabaloo director James Lopez and Jake Akuna, VFX Supervisor, will show some select rough sequences from the animated project followed by a Q&A discussing their process and the challenges with producing crowdfunded films.