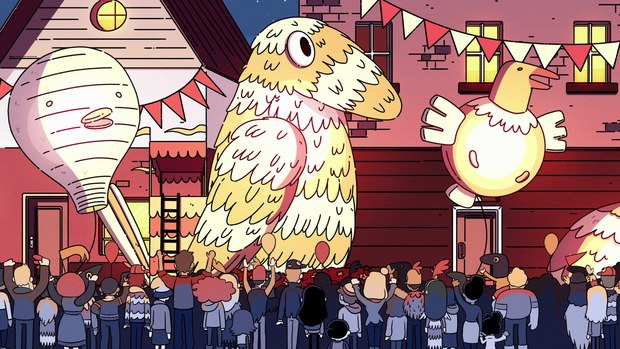 TORONTO -- The Toronto Animation Arts Festival International (TAAFI), the premier destination for animated arts in Toronto, has announced award winners for the TAAFI 2019 Film Festival at the Hot Doc Ted Rogers Cinema, which ran on February 15-17. Following a successful weekend of artistry and excitement, the film festival celebrated and showcased animated talent across the globe from shorts to feature films.

The animation festival hosted an early screening of the third highest grossing film in 2019, DreamWorks Animation’s How To Train Your Dragon: The Hidden World, including a Q&A with director Dean DeBlois and voice actor Jay Baruchel. Additionally, TAAFI hosted screenings for Sony Pictures Classics’ Ruben Brandt, Collector; Shout! Factory’s Tito And The Birds; and GKIDS’ MFKZ.

As the festival came to a close, TAAFI announced the winners within its competitive categories where it welcomed 1,664 submissions, this year. This year, the festival awarded How To Train Your Dragon: The Hidden World director Dean DeBlois as the Animated Person of the Year.

With four feature length films and 83 short films in three days, many contenders were up for this year’s awards, especially for the coveted Audience Choice Award, determined by audience votes throughout the festival. With a tight running, Space Between Stars, created and directed by Samuel W. Bradley and produced by Guru Studio, won the Audience Choice Award.

That’s not all for TAAFI this year-they will also be hosting a job fair for animation and visual effects recruits on April 27th at the George Brown College Waterfront Campus, as well as an industry conference that will take place November 1-3. The TAAFI Film Festival will also return in 2020, running through February 14-16. Submissions for the annual animation festival will open at the end of April 2020.

The full list of awards at TAAFI 2019 is shown below:

The jurors for this year’s editing are Jury Head Mike Valiquette, an award-winning director and producer and the founder of Cartoon North; Eric Steinhart, Content Executive at Industrial Brothers, where he works across the studio’s active development slate of kids animation; Sylvie Rochon, who, with more than 15 years of experience in the TV animation industry (enriched by a detour in gaming and VFX production), is an unabashed cartoon geek and consummate creative citizen; Aron Dunn, Treason Media’s principal and chief creative with nearly two decades of experience; Emily Paige, co-founder of e→d films member of the board of L’Alliance Québec Animation (L’AQA) and the advisory board of MIM: Montréal in Motion; Elize Morgan, writer of TV, games and digital series, whohas worked on animation titles like Mysticons, Ollie: The Boy Who Became What He Ate!, and Bagel & Becky; and Sam Chou, award-winning series creator and director and founder of animation studio Style5.tv.

Founded in 2012, the Toronto Animation Arts Festival International (TAAFI) is a not-for-profit arts organization whose mission is to make Toronto the premiere international destination for animated arts and entertainment. TAAFI hosts a Film Festival, an Industry Job Fair, a Speaker Conference and a variety of spontaneous industry and public events throughout the year inviting professionals and enthusiasts to celebrate and transform the art of animation. Past TAAFI guests have included Eric Goldberg (Disney’s Aladdin), Natasha Allegri (Frederator’s Bee and PuppyCat) and Josh Cooley (Disney•Pixar’s Inside Out).