NFB’s VR ‘Museum of Symmetry’ Goes to Berlin and Annecy

Paloma Dawkins’ work to have its world premiere at the A MAZE. festival. 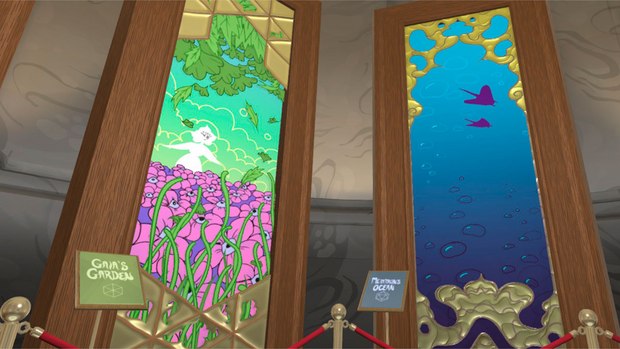 The NFB-produced VR project ‘Museum of Symmetries’ will have its world premiere at the A MAZE. festival in Berlin, followed by a run at Annecy.

MONTREAL -- Museum of Symmetry, a virtual reality experience directed and animated by Paloma Dawkins and produced by the National Film Board of Canada, will have its world premiere at the A MAZE. 7th International Games and Playful Media Festival in Berlin, set for April 25-29.

The work has also been selected to screen at the Annecy International Animation Film Festival, the world’s largest animation event, running June 11-16. The VR@ANNECY section features 11 virtual reality experiences chosen from among 75 original works from 18 countries.

Developed by Casa Rara Studio, Museum of Symmetry lasts 20 minutes and runs on the HTC Vive VR headset. A room-scale VR metaphor for life, the project takes the player through landscapes of earth, fire, wind and water, where vivacious 2D characters live in a 3D playground. Museum of Symmetry disrupts conventional game storytelling to create an unexpected pleasure-positive trip in VR.

The project was first developed as a 2D desktop game, using hand-drawn animation to take the player on a playful journey inspired by patterns and symmetry in nature. As the environments and characters took shape, it became increasingly apparent that, to have a cathartic experience, the player must embody the simulated environments.

The NFB teamed up with then-budding VR upstart Casa Rara, a studio with expertise in AAA and empathy games and a desire to branch out into more unusual immersive experiences. The core concept was adapted for HTC Vive, which allowed the player to walk, hold and explore at their own pace. Immediately, Paloma’s intuitive artistic language clicked with the form. Unnecessary game mechanics were trashed and the story was unburdened from typical narrative tropes.