Created by Anishinaabe artist Lisa Jackson, the project imagines a future reclaimed by nature and connected to the past via indigenous language. 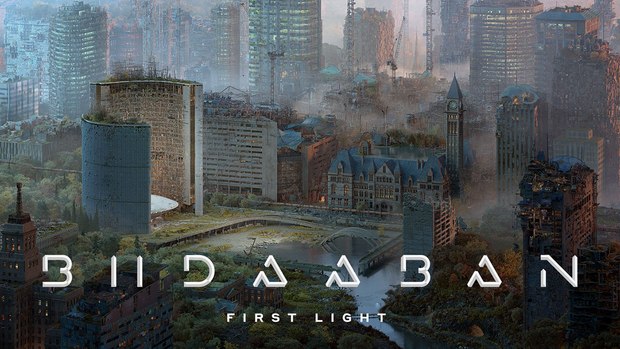 ‘Biidaaban: First Light,’ a VR project directed by Anishinaabe artist Lisa Jackson and produced by the National Film Board of Canada will premiere in competition at the Tribeca Film Festival.

MONTREAL -- Making its world premiere in competition as part of the Storyscapes program at the Tribeca Film Festival, Biidaaban: First Light is a bold VR work of indigenous futurism by award-winning Anishinaabe artist Lisa Jackson, 3D artist Mathew Borrett, digital design agency Jam3 and the National Film Board of Canada, a leader in immersive and interactive storytelling.

Biidaaban: First Light asks users to think about their place in history and their role in a possible future. As they move through a highly realistic future Toronto reclaimed by nature, they hear the languages of what was originally known as Tkaronto. Through gaze-based interactions, users engage with written text of the Wendat (Huron), Kanien’kehá:ka (Mohawk) and Anishinaabe (Ojibway) and gain insight into the complex thought systems of this land’s first peoples.

Biidaaban: First Light illuminates how Indigenous languages can provide a framework for understanding our place in a reconciled version of Canada’s largest urban environment. The importance of language in understanding Indigenous perspectives is one of its main themes. Indigenous North American languages are radically different from European languages and embody sets of relationships to the land, to each other, and to time itself. But as indigenous languages face the risk of disappearing, we risk losing what they have to teach us.

“Biidaaban” is an Anishinaabemowin word that means “the first light before dawn.” It also refers to the idea of the past and future collapsing in on the present.

Biidaaban: First Light is the first interactive, room-scale VR work by Jackson, whose award-winning fiction and documentary films have screened widely at festivals such as Berlin, Hot Docs, SXSW and London BFI. In Biidaaban: First Light, 3D artist Mathew Borrett used actual architectural drawings of Toronto to create a future version of the city at scale.

Biidaaban: First Light is the latest NFB work to reflect the Canadian public producer’s commitment to improving gender parity in Canadian film and digital media and transforming its relationship with Indigenous creators and communities, with a series of major initiatives that will see the NFB strengthening its leadership in these areas.

Biidaaban: First Light is produced by Dana Dansereau and Rob McLaughlin from the NFB. The executive producer is Rob McLaughlin, who is also the head of the Digital Studio in Vancouver.