The charming stop-motion spot, created by award-winning animator John Kelly, focuses on Chipotle’s commitment to sustainable farming and human welfare; with a soundtrack by Grammy-award winning singer Kacey Musgraves, the commercial is a patchwork quilted love letter to the restaurants’ supply chain and the people behind it. 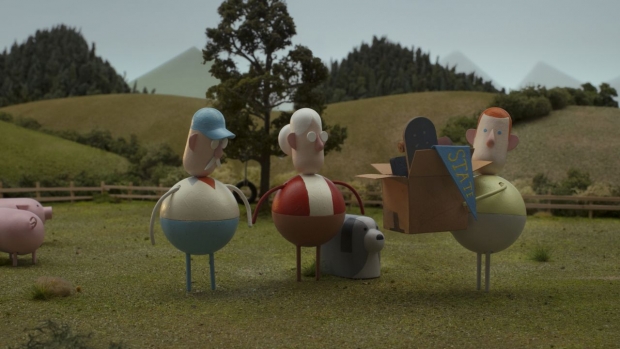 Nexus Studios and award-winning animator John Kelly (Cannes Grand Prix winning short, Back to the Start) have created a stop-motion advert for Chipotle that brings sustainable farming into focus with an emphasis on human welfare. Observatory and the Chipotle Cultivate Foundation’s A Future Begins is animated with a soundtrack by Grammy-award winning singer, Kacey Musgraves.

Watch the making of too!

The short is a love letter to the patchwork quilt of family-run farms that make up Chipotle’s supply chain; it follows the four-season structure with meticulous craft and storytelling at its center. Viewers follow our now aging Pa from the original film struggling with the farm as his son studies in the city. The tale of hope concludes with the son returning to the farm with sustainability and technology on his side, reaffirming Chipotle Cultivate Foundation’s ongoing pledge to support the next generation of farmers.

The production employed 10 different sets, featuring 82 tiny resin puppets including 12 sheep, 10 cows, 12 pigs, 10 chickens, 12 farm helpers, 10 characters on campus and 16 audience members all captured in one fluid camera move. Kelly’s commitment to authenticity ensured only real-world farming techniques used by Chipotle suppliers were depicted. These include solar panels to provide shade for animals, plots of land dedicated to rewilding and polytunnels to cover Chipotle’s traffic light crop of peppers. Craft lovers are also treated to nearly ten minutes of a behind-the-scenes look at Kelly and his talented team of puppet makers.

“It’s a rare opportunity to be handed the keys to a 2-minute stop motion epic, so I was delighted to be able to get the band back together for a sequel,” noted Kelly. “I still love the simplicity of Back to the Start but 10 years on the world is a more complicated place (to put it mildly) and it would have felt reductive to remake the last film. In order to work in 2021 this needed further complexity and scale. More nuanced performance. More geographic authenticity. And more dog. At their heart however, the two stories complement each other; the last one was about animal welfare and the thrust of this story is human welfare.”

With the impact of Back to the Start still felt following it’s Superbowl debut that has all told generated 300 million media impressions and over 80 industry awards, A Future Begins also launched with a bang. The new film received a first of its kind TV premiere, launching in its own commercial pod, broadcast to an estimated audience of 77 million households during the November 25 Thanksgiving game between the NFL’s Raiders and Cowboys. The film was released digitally on November 16 as the centerpiece of a fully integrated, content-centric campaign including the release of Kacey Musgraves’ “Fix You” on Spotify, Apple Music and other DSPs, and QR codes on millions of Chipotle’s recyclable bags through which consumers can watch the full film.