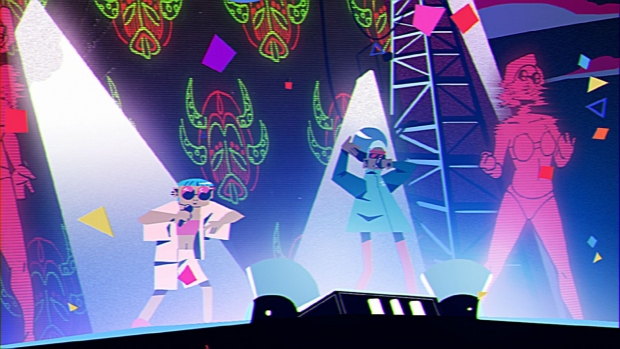 Puerto Rican filmmaker Kristian Mercado Figueroa has shared his award-winning film, Nuevo Rico, with AWN with the bold, psychedelic short’s exclusive online debut. The project ventures into Latinx-futurism, exploring Puerto Rican identity in a new way; it’s a defiant gesture of representation missing in the mainstream that looks at commercialization and colonial status of the island by drawing parallels from the explosive success of its star Barbie's reggaeton career - as audiences take from her cultural influence, they leave her with nothing.

In the film, a brother and sister stumble upon a celestial secret that changes their lives forever and propels them into Reggaetón stardom. But they soon discover that their newfound fame comes at a deep price.

The visually stunning film is a loud-and-clear arrival of the filmmaker’s talents and singular voice. Experience it here:

Nuevo Rico’s mix-media production features a combination of 2D animated characters and 3D animation as well as hand-drawn cel animation, collage, circuit bent analog video, and footage draw overs. The use of scan and print processing, CTR TV capturing, and digital imaging merge and mesh into a seamless visual. The hybrid style is constantly mixing to create a unique aesthetic that pushes boundaries.

Figueroa is a Puerto Rican filmmaker living in Spanish Harlem whose music-driven short film Pa’lante won the SXSW Jury Award 2019. His screenplay HawkBells was awarded at Slamdance for screenwriting in 2020. He was an official selection at SXSW 2020 for both Grammy-nominated Black Pumas and Miami Nights. He also directed comedy specials coming to Netflix for Hannibal Buress and SNL's Sam Jay slated for summer release, as well as content for Adult Swim, Bad Bunny, Billie Eilish, Awkwafina, and MF DOOM.