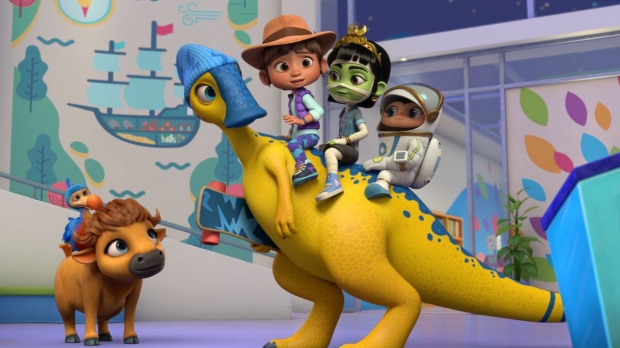 Netflix has announced their newest preschool series, Ridley Jones, created and executive produced by Peabody, Emmy, and Humanitas Prize-winning children’s television screenwriter and producer Chris Nee, known for creating the popular kids’ series Doc McStuffins and Vamperina. Nee is heralding in a new era of preschool TV that is steeped in representation, diversity, and inclusivity, continuing her mission to change the way we look at media for kids. Her newest series features a strong female lead character and re-occurring LGBTQIA+ characters like Fred the non-binary bison (the first reoccurring non-binary character in a preschool series).

The CG animated series follows six-year-old Ridley who, alongside her mother and grandmother, is a protector of the museum she calls home. Keeping the exhibits safe takes a real hero, especially when the lights go out and the exhibits — from Egyptian mummies to stampeding elephants — come to life! Throughout her many adventures, Ridley finds that being a good protector, and leader, is about finding common ground and respecting others, no matter what our differences might be.

“This is the first show I brought to Netflix,” shared Nee. “I really wanted to do a series where a girl was the action-adventure star I always wanted to see (or be) when I was growing up. Like so many of my shows, this world is a perfect canvas upon which to create a community of oddball characters and model what it means to take care of each other, even if you aren’t from the same era of time or wing of the museum. With music, comedy, heart and a true heroine’s story, Ridley Jones is a worthy successor to Doc McStuffins and Vampirina. Can’t wait for you to meet her!”

The first episode of Ridley Jones is now available to watch on the Netflix Jr. YouTube channel. The series streams on Netflix beginning July 13.

Back in 2018, Netflix signed a multi-year overall deal with Nee to write and produce exclusive new animated and live-action series for preschool and all audiences. Additionally, it gave Netflix a first-look option on feature film projects from Nee and her production company, Laughing Wild.