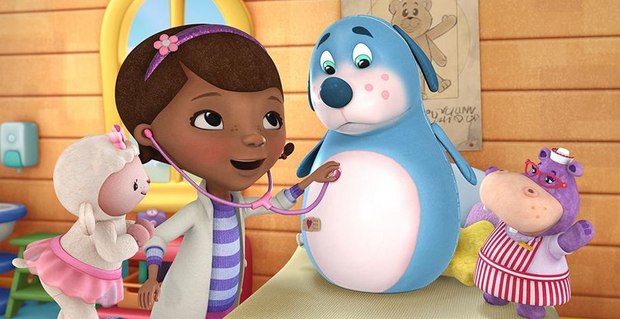 Disney Junior has ordered a fifth season of its Peabody Award-winning hit Doc McStuffins. Since its premiere in March 2012, the animated series has received acclaim for its portrayal of a young girl who aspires to be a doctor like her mom. Showcasing the hallmarks of great Disney storytelling -- fantasy and wish fulfillment -- the series models compassion and good health for kids age 2-7.

“Doc McStuffins is an unmistakable example of our commitment to powerful storytelling that enriches and enlightens kids,” said Nancy Kanter, executive vice president and general manager, Disney Junior Worldwide, in making the announcement. “I can think of no other children’s television show in recent history that has touched as many lives and made the kind of impact around the world that Doc has. Our viewers have forged a deep connection with this series and are very vocal about how strongly they believe in these characters. We are excited to share with them many more stories about Doc and her toys when season five begins airing in 2018.”

Shortly after the series launched, a group of female African-American physicians began a “movement” they coined “We Are Doc McStuffins.” Seeing a reflection of themselves in the Doc character and the opportunity to inspire young girls, the group grew to form the Artemis Medical Society, an organization which now boasts a membership of over 4700 women physicians of color from around the world.

Doc McStuffins has many notable fans including socio-political comedian W. Kamau Bell who recently noted it as, “One of the most important shows in the history of television.” First lady Michelle Obama guest-starred as herself in an episode and also hosted a special White House screening for military families of a Veterans Day-themed episode of Doc McStuffins. Other guest stars include Anthony Anderson, Audra McDonald, Geena Davis, David Copperfield, Taye Diggs, Patton Oswalt and Carson Daly.

The series has consistently been a Top 10 preschool cable TV series in key demographics. Doc McStuffins averages 16 million views on the Disney Junior app, VOD and Hulu, and reaches 150 million viewers worldwide each quarter. In the past year, Doc McStuffins has been ordered over 20 million times via set-top-box VOD and generated over 10 million consumer engagements via YouTube.

Along with critical acclaim, Doc McStuffins has inspired an immersive traveling museum exhibit designed for kids age 2-7. Currently housed at the world’s largest children’s museum, The Children’s Museum of Indianapolis, the exhibit will travel to other museums around the country in 2017, spreading the show’s messages of care and compassion directly into local communities.

The Doc McStuffins character is prominently featured at Disney Parks, where she participates in daily meet-and-greets and is highlighted in the popular “Disney Junior Live on Stage!” attraction at Disney California Adventure park at the Disneyland Resort and Disney’s Hollywood Studios at the Walt Disney World Resort in Florida. Other extensions for the series include over 1350 book titles globally from Disney Publishing Worldwide; a robust product assortment from Disney Consumer Products and Interactive Media, including the Doc McStuffins Pet Vet Checkup Center by Just Play, which won Toy Industry Association, Inc.’s 2016 Toy of the Year and Preschool Toy of the Year awards; a soundtrack and digital EP from Walt Disney Records; and seven DVDs from Disney Studios including the Doc McStuffins: Toy Hospital DVD released October 18.