Vancouver VFX house reveals the processes that drive some of cinema’s most memorable digital characters, including the prawn-like aliens of ‘District 9,’ ‘Jurassic World’s velociraptors, and the eponymous title character of ‘Chappie.’ 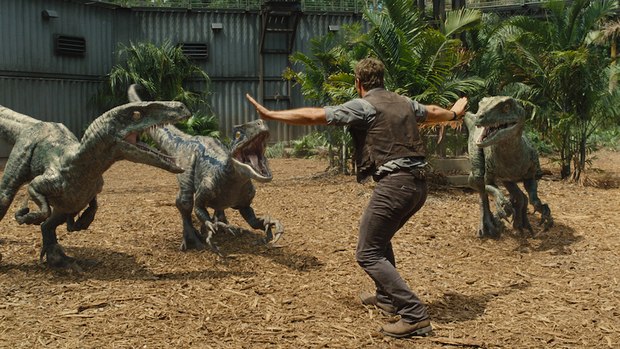 LONDON -- District 9’s prawn-like aliens, Jurassic World’s velociraptors, Chappie’s eponymous title character -- Image Engine has created some of cinema’s most memorable digital characters in recent history. Now revealed are the processes that drive these characters, and how the artists continue to push the envelope when it comes to computer generated creature creation.

How do you bring a dinosaur back from extinction? What schematics do you turn to when building an android capable of human emotion? Where would you begin in the conception and creation of an entire alien race native to a planet far beyond our own? There aren’t many jobs in which you’re faced with such challenging questions, but that’s day-to-day life at Image Engine, a place where a break and a cup of coffee might be quickly followed with a bout of raising the undead.

Over the past two decades the studio has been responsible for the creation of a variety of computer generated life forms, from the large to the small. Whether it’s the otherworldly crustaceans populating the world of District 9 or the heroes in a half-shell of Teenage Mutant Ninja Turtles, Image Engine artists are dedicated to minute detail and a meticulous approach to preparation insuring the achievement of a stunning sense of reality.

Image Engine isn’t the world’s biggest visual effects facility, but it certainly works on some the world’s biggest films. As a medium-sized company tackling high-end work for a number of prestigious clients, an ethos rooted in careful preparation is key.

“Whatever the project, whatever the creature, we make sure we spend as much time up front to get that digital asset completely production-ready,” begins Mark Wendell, computer graphics supervisor. “While other companies might throw armies of artists at shot work and solve every little rigging issue at shot time, we make a conscious decision to take the investment up front, we pour our efforts from the outset into extra lookdev work, and build our rigs with that extra intelligence.”

Jeremy Mesana, animation supervisor, commented, “Our rigs work properly from the get go, we don’t have to go back in there and correct pinches and folds in the legs, we’re not sculpting 3D for every muscle flex after the fact. It lives on the rig and it’s always there.”

This meticulous approach to creature design means that Image Engine assets are totally ready to be animated, integrated into shots, and rendered with very few tweaks necessary.

“We build our lookdev and lighting setups so they’re completely calibrated against real-life photography and real-life reference,” details Wendell. “By the time an artist gets a hold of the character, it can do anything they need it do, quickly and efficiently.”

A great example of this was the automaton with attitude, Chappie. “We spent a huge amount of time working on that character,” remembers asset supervisor Barry Poon. “Once it was in production it rarely came back needing higher resolution geo, or textures, or any tweaks to the lookdev to get it to look right in a different shot. We put all of the fine details into the model on every square inch of his body, because the camera could go anywhere. Investing up front really pays off in the end. No time is wasted and our artists’ time is spent pushing that last 5 per cent, and really making the character feel beautiful, real and perfect.”

Technical preparation is but one element of the overall equation. A good set up is key, but a solid final result also depends on artistic skill, imagination, and, to some extent, limitation.

“There’s always some desire to make something larger than life, but the more you give in to that, the more you get away from something real that people can relate to,” explains Wendell. “At Image Engine, we want to create characters people can truly believe in, so we stay grounded in what the creature would actually do. Even when we’re creating aliens, we think of these things as real creatures, living in a world of real physics.”

As such, the common thread that unites nearly all of Image Engine’s creature creations is a foundation in real-world reference, something that grounds these otherwise imaginary creatures in reality. In Jurassic World, for example, this meant looking to the animal kingdom. Beasts such as alligators, lions, ostriches and even crows were used to create the locomotion and sense of presence exhibited by the film’s four ferocious velociraptors.

“Bones are always the best starting point when working on something like a raptor,” explains Mark Masson, senior creature technical director. “They give you an idea of the physical limitations of that creature, much like a robot. When it comes to velociraptors, birds are the closest relatives, like emus and the raven. You can then use their motions to work out muscle structure and so forth. That helps the raptors feel like a physical, tangible part of the environments they exist in.” The reality of post-production sometimes means that a prep-heavy workflow isn’t achievable, especially when it comes to the world of episodic television. One example of this would be the latest season of Game of Thrones, in which Image Engine was tasked with tackling the iconic reveal of the icy-skinned Night’s King.

“Production was initially planning on just using an actor in prosthetic make-up, however, when they saw what it looked like on location on a grey day, they realized they needed to enhance the look of the character,” remembers Wendell.

Due to the production's fast episodic turnaround, Image Engine needed to bring another element of its skill set to the fore, inventive problem solving. Relying on the compositing team, Image Engine touched up the character’s icy elements in 2D, giving the undead White Walker the chilling look required.

“We needed to achieve a perfect match of the actor’s face and make-up, and then create a whole bunch of layers of icy material,” reveals Wendell. “Normally we would pre-load a lot of the schedule to work out exactly what that might look like in our lookdev and asset builds, but on Game of Thrones that wasn’t possible. Instead, we had our lighting and texture team generate a whole bunch of different ideas for layers that could be used to build out the look.”

From there it came down to mixing and matching different layers in comp to achieve the final look. “That’s a different way of working for us, but it worked out really well considering the schedule,” says Wendell. “You don’t always get that prep time, but there are always solutions that allow you to work in an efficient way.”

Preparation and human creativity form two elements of the Image Engine creature pipeline, but both are bolstered by an all-important third element, technology. Along with ideas and organization, Image Engine also relies on a robust and capable toolset to help drive the creation of its characters.

“A good example of this can be seen in the character of Chappie,” explains Wendell. “That digital asset is 100 per cent mechanically accurate, all joints on his body work just as they do on the 3D-printed, practical model. We didn’t want to cheat that using any CG trickery, there were no universal ball joints; they were all separate, single-axis joints. That meant creating a new tool that could handle the required complexity.”

The result was a bespoke IK solver, one that could handle the elaborate animation controls that remained beyond the capability of the regular Maya solvers. Using this, Image Engine animators could instill Chappie with a believably robotic sense of motion.

“Thanks to the new solver most of Chappie’s animation was automated, and we could just deal with him as a regular puppet,” says Mesana. “The underlying rig would move the joints and rotate the cogs and all those little doodads that were internal to the mechanics of the character. The end result was that we had something that looked like a moving piece of machinery: it didn’t just look like a working robot; it was a working robot!”

Every creature created by Image Engine is different, in terms of their final look and the technological processes that define them. What they do share in common, however, is this triptych of preparation, creativity and technology, a marriage of disciplines that enables the final design to boast a level of believability that stands up against any level of scrutiny.

“Initially, when we set up Image Engine for film work, we had a specific mindset that centered around high-end work at good value for our clients,” commented visual effects executive producer Shawn Walsh. “Ultimately, District 9 became the acknowledged starting place, our visual effects DNA so to speak, for a lot of people”. This DNA, as Walsh says, was built on the basis of strong R&D, a dedication to preparation and unique creativity. Nowadays, at Image Engine the company’s core competency is still very much focused on animation – but has also broadened out to include complex computer generated vehicles, massive digital environments and all manner of generalist challenges.

“It doesn’t matter what project we’re working on, every member of the team is committed to creating something that is not only unique for the viewer, but unique to us,” concluded Wendell. “It’s always a challenge, but one we fully embrace. We look at each individual creature and ground it in some reality – even if it’s not our own. Whether it’s a robot, or a dinosaur, or an alien, we try to think of these things as real creatures, living in a world of real physics. That’s the Image Engine way.”