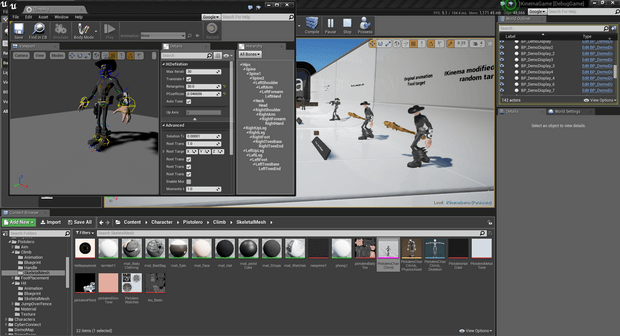 GUILDFORD, UK -- Ikinema, a leader in real-time inverse kinematics, has announced a small studio version of its full-body IK RunTime middleware. RunTime-Indie is priced at approximately $144.91 USD and is targeted at small, independent studios.

RunTime-Indie is technically identical to RunTime, the full-body solver used by Microsoft, Square Enix and other top publishers to create convincing and realistic motion for characters during game play. Integrated with Unreal Engine 4, RunTime enables characters to react naturally to ever-changing terrain and environments, and scale obstacles with ease, all in real-time. As a result, VR and game developers are able to deliver astonishingly real animation with totally believable characters.

IKinema has also announced the addition of a full rig editor to both RunTime and RunTime-Indie, enabling developers from studios of all sizes to rig characters, whether human or fantasy, without the use of third party tools. Instead, they can rig directly within the engine, modifying assets and unlocking game play, from locomotion, climbing and foot placement, to pointing props and weapons, reach and look-at.

“The ability to go from rig creation to game usage within Unreal Editor is an advantage in itself but there are other benefits too, simplified workflow and decreased production time, as well as more accurate and realistic animation,” commented IKinema CEO Alexandre Pechev. “And now, with RunTime-Indie, smaller teams can deliver the same exceptional realism as their bigger counterparts.”

IKinema is running a launch campaign offering a saving of 30% on new licences available for a limited time through January 24, 2016. Enter promotional coupon: RT-INDIE-6Jan at time of download. RunTime-Indie is available for download on here. It does not include console or customer support and is currently available for PC only. Mac, iOS and Android versions are in development.