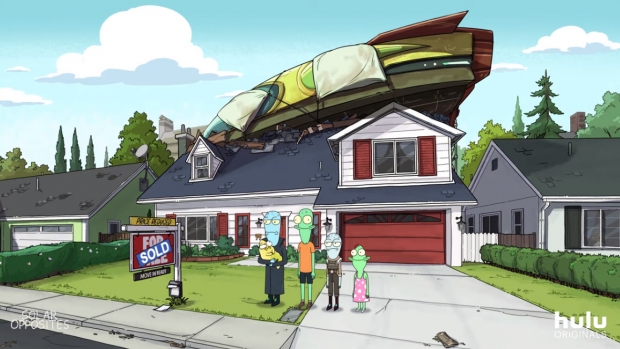 War of the Worlds this is not! The first of two 8-episode seasons of Rick and Morty co-creator Justin Roiland and executive producer Mike McMahan’s new animated comedy, Solar Opposites, will debut May 8 on Hulu. The show centers around a team of four aliens who have escaped their exploding home world, only to crash land into a move-in ready home in suburban America. They are evenly split on whether Earth is awful or awesome. Korvo (Roiland) and Yumyulack (The Goldbergs’ Sean Giambroni) only see the pollution, crass consumerism, and human frailty, while Terry (Silicon Valley’s Thomas Middleditch) and Jesse (Mary Mack) love humans and all their TV, junk food, and fun stuff. Their mission: protect the Pupa, a living super computer that will one day evolve into its true form, consume them and terraform the Earth.

There’s blood, guts, heroin, and fear of parking enforcement… and that’s just the trailer! You’ll recognize the gags, visuals, and tone from the comedy team’s hugely popular Adult Swim hit. According to Roiland and McMahan, “Solar Opposites is coming! We can only show you the teaser right now, but the whole season will be out in a matter of weeks! Stay inside and stay healthy so you can watch and love this show and call us geniuses and all that shit.”

HBO Max just signed a deal to stream the first three Rick and Morty seasons when the platform launches in May; Back in 2018, Roiland and co-creator Dan Harmon snagged an unprecedented 70-episode order for their multi-platform hit show. McMahan has also been quite busy; he is developing and executive producing the half-hour animated comedy, Star Trek: Lower Decks for CBS All Access, which also received a two-season order.

Solar Opposites is executive produced by Roiland, McMahan and Josh Bycel. The series is produced by 20th Century Fox Television.