Scrooge, Donald, and the triplets can’t catch a break while treasure hunting in the first of three new ‘Chibi Tiny Tales’ shorts Disney is releasing in the leadup to the ‘DuckTales’ series finale on March 15. 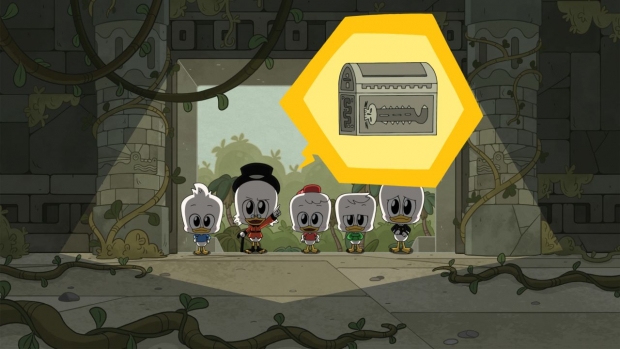 Leading up to the March 15 series finale of Disney's critically acclaimed DuckTales, the studio is rolling out a series of three new Chibi Tiny Tales shorts, featuring Chibi-style versions of favorite DuckTales characters. In an AWN exclusive, check out Mayan Mayhem; in the short, Scrooge, Donald and the triplets can't catch a break while searching for treasure in a booby-trapped temple. The short also begins its run today on Disney XD, Disney Channel YouTube and DisneyNOW.

Two more shorts are coming over the next two weeks:

Dime and Dash - Magica de Spell and Flintheart Glomgold take a break from battling Scrooge as they go head-to-head to steal his Number One Dime. This short premieres Sunday, March 7 on Disney XD, Disney Channel YouTube and DisneyNOW.

Burrito Quest - While Scrooge, Donald and the triplets relax on vacation, Launchpad and Webby set out on a daring mission-- to find the world’s largest burrito. This short premieres Sunday, March 14 on Disney XD, Disney Channel YouTube and DisneyNOW.

New episodes of the final DuckTales season began debuting every Monday starting this past Monday, February 22, leading up to the series finale, which will encore non-stop for 24 hours following its premiere. In addition, there will be a week-long DuckTales marathon of every aired episode beginning March 8.

Executive produced by Matt Youngberg and co-executive produced by Francisco Angones, the Emmy Award-nominated DuckTales wrapped production after 75 episodes and more than 15 shorts. The series continues to be available on Disney Channels and Disney+ around the world. In the U.S., the series is the #1 ratings driver on Disney XD and has reached over 234 million views on social media and YouTube since its launch in 2017.