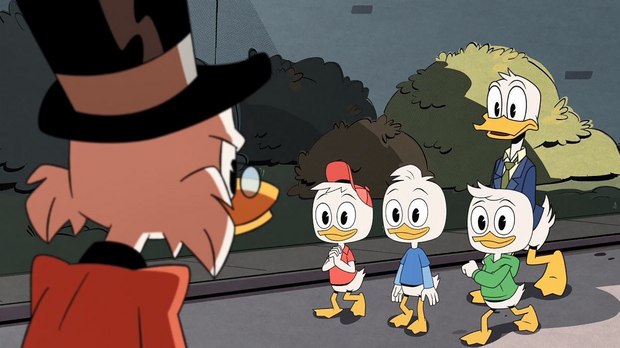 DUCKBURG -- Disney XD has ordered a second season of the all-new animated comedy series DuckTales ahead of its highly anticipated summer premiere. Based on the Emmy Award-winning series treasured by a generation of viewers, the Disney Television Animation-produced series stars David Tennant as Scrooge McDuck; Danny Pudi, Ben Schwartz and Bobby Moynihan as the voices of Huey, Dewey and Louie, respectively; Kate Micucci as Webby Vanderquack; Beck Bennett as Launchpad McQuack and Toks Olagundoye as Mrs. Beakley.

Here’s a 90-second first look of the series, which was released on Thursday on the Disney XD YouTube page:

“Fans around the world are eager and we’re looking forward to introducing viewers to the all-new DuckTales,” said Disney XD SVP, Programming and General Manager Marc Buhaj in making the announcement. “This early season two order is a testament to the quality work the creative team, led by Matt and Frank, and the cast are delivering.”

The new family comedy-adventure series will once again take viewers along as Scrooge McDuck, his curious and mischief-making grandnephews Huey, Dewey and Louie, the temperamental Donald Duck and their trusty team, Webby Vanderquack, Launchpad McQuack and Mrs. Beakley, embark on high-flying adventures around the world.

In December, a video of the cast singing a rendition of the original DuckTales theme song was the #1 video on YouTube and trended on social media, with over eight million views across YouTube and Facebook to date.