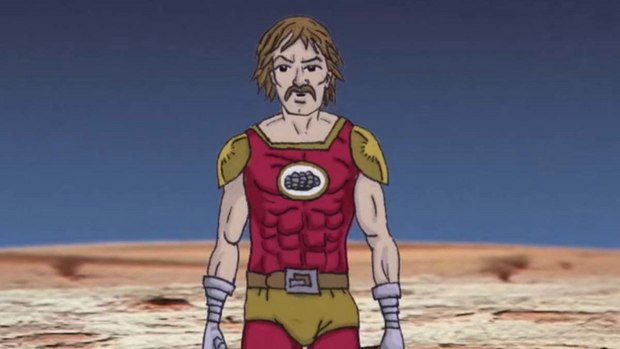 AUSTIN, TX -- The Rooster Teeth Animation Festival has announced that Adult Swim will be premiering the first two episodes of new series Apollo Gauntlet at the event, which takes place during RTX Austin July 7-9 at the Austin Convention Center and kicks off on July 6 with a “FIRST Night” screening at the Paramount Theater. Adult Swim will also screen more than an hour of sneak peeks at new animation during a special screening entitled “Adult Swim Presents” during the Rooster Teeth Animation Festival with an exclusive Q&A with the creators of Apollo Gauntlet and Squidbillies.

On Earth, Paul Cassidy, is just another cop, but when the evil Dr. Benign transports him to another world, he becomes a new kind of hero. With the help of a magical suit and a set of talking gauntlets, he’s able to fight crime exactly the way he wants...and he’ll do it as Apollo Gauntlet! Set in a futuristic medieval society, the quarter-hour animated adventure comedy series is created by Myles Langlois and is produced by MONDO’s animation studio, Six Point Harness, and Mosaic.

Rooster Teeth Animation Festival is in its second year and bigger and better than ever, with panels and exclusive screenings from animators including Frederator, Cyanide and Happiness (Explosm Entertainment), Mondo Media, Mashed, and more, and an exclusive theatrical screening of the Netflix Original series Castlevania at the Paramount Theater on July 7, the day it releases on Netflix.

Single day and weekend passes for RTX Austin 2017 are still available at http://www.rtxaustin.com/ starting at $35.00. Children ages 6 and under get free admittance with a paying adult.