If the goal of the studio’s SparkShorts incubator program is to identify young artists who have directing potential, then producing this wonderful film was an overwhelming success. 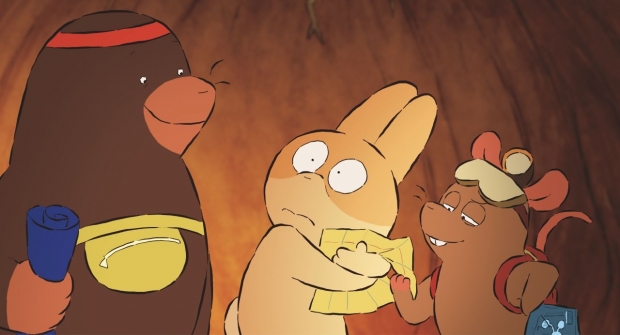 Burrow is a fast-paced laugh-out-loud 2020 addition to Pixar’s growing collection of stellar SparkShorts, short form animated films that showcase new directors and techniques. Rarely have I fallen in love with a leading character so quickly – from her first moments on the screen, our lead bunny is a wonderful combination of naïve idealism and derring-do. The story is universal – an aspiring homeowner who starts with a dream and a plan (the crudely drawn plan, replete with “Bath / Disco?” notation over the tub, provides the first of many hilarious and endearing moments in this richly entertaining short), but finds that actually building a home is far more difficult than sketching the plan.

As our bunny encounters setback upon setback, her response is to go it alone – to literally dig deeper into her own growing frustration and anxiety so she can avoid the humiliating position (to her) of simply stopping and asking for help.

In a film filled with surprises, the first is the production design and style – no traditional Pixar 3D uber-sophistication here – Burrow feels more like a hand animated favorite old-time storybook. That style decision creates an interesting lens through which to discuss the film. Aside from the practical considerations of cost and production time, this storybook look lends an accessibility and warmth that is well developed throughout the film. The illustration style allows for a wide variety of supporting animals, from studious frogs to a restaurant for ants, to the alpha badger whose powerful roar calls the entire underground colony to action.

If you have a “first” surprise, you need a second.

Every film is a social commentary – whether explicitly or implicitly. Perhaps the biggest and most wonderful fantasy in Burrow is how well everyone gets along.

Our bunny accidently breaks into the warm home of what looks like gophers, and is she chased away? No, she is offered fresh baked cookies! Every underground twist and turn in her search for a place to dig her burrow results in a spectacular incursion into another animal family’s burrow, and the responses are mostly good-natured and downright welcoming (except for the horrified restaurant of ants – some of them fainted). In the end, the entire harmonious colony of inter-connected multi-species homes is saved by a lightning-fast combined rescue effort by all the characters.

Burrow was written and directed by erstwhile storyboard artist Madeline Sharafian, an exuberant 28-year-old Pixar team member. It premiered this past December 25 on Disney+. If the goal of the SparkShorts incubator program is to identify young artists who have directing potential, then supporting Sharafian’s production was an overwhelming success. We are looking for great things from this young talent. Stay tuned!

Dr. Maria Elena Gutierrez is the CEO and executive director of VIEW Conference, Italy’s premiere annual digital media conference. VIEW Conference is committed to bringing a diversity of voices to the forefront in animation, visual effect,s and games. For more information about the VIEW 2021 program of events, visit the official website: http://viewconference.it