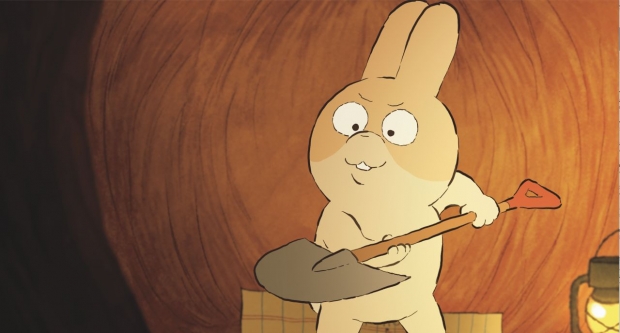 Premiering tomorrow, December 25, on Disney+, along with Pixar and Pete Docter’s anxiously awaited new feature, Soul, is the studio’s latest SparkShorts animated short film, Burrow. Written and directed by Madeline Sharafian and produced by Mike Capbarat, Burrow is a gentle, funny, and utterly charming 2D short about a young rabbit who embarks on a journey to dig the burrow of her dreams, despite not having a clue what she’s doing. Rather than reveal to her neighbors her imperfections, she digs herself deeper and deeper into trouble; only after hitting (bed)rock bottom, does she learn there is no shame in asking for help.

Pixar’s experimental inhouse animated short film development program, known as SparkShorts, is designed to discover new storytellers and explore new storytelling techniques from across the studio. You can find many of the program’s excellent films on Disney+, including Rosana Sullivan’s Oscar-nominated Kitbull. Unlike the studio’s more expansive theatrical shorts program, home to well-known and hugely popular films like Oscar-winners Bao, Piper, and For the Birds, among others, each produced with larger artistic teams, budgets, and schedules, SparkShorts are true down-and-dirty operations, with six-month schedules, minimal budgets, no firm commitments on resources, and a much greater artistic “jack of all trades” mentality for everyone involved. According to Sharafian, its “Pixar's indie branch, like a little mini studio within the studio itself.” And they move fast. For Sharafian, who’s been at Pixar since 2015, like with other SparkShorts directors, once her pitch was greenlit, she had little time to waste. “There are barely any executive checks,” she notes. “Once you’re chosen, the studio puts its trust in you and lets you make whatever film you want. And I think that's pretty cool.”

In fact, her final film hews quite closely to her original pitched outline, in no small part because there was little time to deviate. “There were some minor tweaks, especially in the middle, but for the most part, it was close,” she shares. “We didn't have time to go over things again and again. I had one brain trust session, made fixes from there, and then the boards stayed mostly the same. I didn't want to iterate too much. I just wanted to start running and making the thing.”

Her decision to make the film in 2D was also based in part by the need to move quickly; 2D allowed her to create a much more expansive world that wouldn’t have been possible in such a short time with 3D/CG. “For this project, I was given a lot more freedom to make a bigger world, because with just six months, and probably not many people being made available, the number of things that you'd be able to model and shade in 3D was going to be a little bit limited, just because of time. And for me, I wanted this rich world. I wanted all these different homes and rooms. You can draw something, you know, in two days that looks quite complicated. And I wanted to have as many of those as possible. So, for me, it was such a practical choice.”

“There was also a looseness of expression that I had hoped I would get from 2D that really paid off,” she continues. “We really wanted rabbit to have these weird faces. And it's so nice, with that sort of thing… all you have to do is ask the animator to draw it and they draw it. It exists. You know, we don't have to break any models. We really have total freedom for whatever we want to exist. We just draw it and there it is.”

The visual style of the short was inspired by children’s books from famous authors like Jill Barkley, Beatrix Potter, and Richard Scarry. “I'm personally obsessed with cutaways,” Sharafian reveals. “Always have been, even as a kid. And for cutaways, that detail is important. It should be the kind of picture you want to pour over for hours as a little kid. That’s another reason this had to be done in 2D; that kind of detail is easier drawn than modeled.”

Working without a production designer, Sharafian nevertheless pretty much knew what she was looking for visually from the very beginning of the project. She claims that though she was comfortable with her capabilities and limitations as a designer, she realized she had “huge weak spots” which, while not a huge issue on a student film, would need to be dealt with on a studio film; “thankfully,” she was able to enlist the help of “a group of professionals who could do that work a lot better.”

She boarded the film herself, which she did over a single month prior to the production’s official start. Her boards ended up serving many purposes besides just conveying the broad brushstrokes of the story and pacing. “Since Burrow is 2D, the storyboards also acted as timing guides for the animators, and sort of our layout as well,” she explains. “I made sure to pose everything out quite thoroughly. So, we had an accurate runtime on everything, right from the start, working from those boards. We would trace our backgrounds out on top of the boards as well; we didn't really go any more complicated than that. That's not traditionally how it's done, but it’s a SparkShort and we can kind of do what we want.” Almost without exception, one of the biggest challenges on big studio shorts at places like Pixar, including with SparkShorts, is planning, managing, and making efficient use of artists constantly moving on and off major projects according to schedules that take priority and can change at any moment. The transient resource base impacts every aspect of the production, including finding the time and dynamic of giving direction and feedback to artists who might literally have one day to work on something that then has no time for modifications.

But that was not completely the case for Sharafian. “For the Burrow production, with a simpler 2D pipeline – we used TVPaint - we had a way of working that made things a lot easier,” she confesses. “With 2D, we had a lot fewer departments, so we had the time to get to know people a little bit more. For both art and animation, we did walk throughs every single day. Mike and I would walk into everyone's office every day and say, ‘You don't have to show us anything, but if you have any questions we're here.’ That not only helped us quickly get to know everyone better, but it also let us catch things early. So, if somebody was accidentally drifting off in the wrong direction, it was so much easier catch things early with our one-on-one meetings.”

“So, you know, no one has to get embarrassed,” she adds, “and it really keeps things moving very quickly. After a couple of weeks of doing that, people get into a groove. Normally, you have more time to get into the groove, but with Spark, it has to happen fast. So, at a certain point, those check-ins became little chats, little hellos, because people didn't really need as much direction anymore. They'd gotten it by that point. So, taking the time to catch things early was a huge help for us.”

Sharafian also prepared herself for the director role by learning from colleagues who’d previously directed shorts within the program. “I wasn’t too surprised [by the team’s response to my leadership] because I had gotten a lot of advice from previous Spark directors,” she says. “I remember getting solid advice, like ‘have an answer for everything, even if the answer is that you don't know at that moment… you have to have an answer.’ I was lucky that my story was solid; there was no moving around. If an animator asked me a question about a shot or an expression, I was able to back it up pretty easily with the boards.” “But honestly,” she continues, “I was mostly surprised by how much people were able to do on their own. I remember, especially with the animation, they moved so quickly. They were such professionals. Of course, I knew they were, but it was my first time working with them. And I was just blown away. Everyone was so fast and so talented. It was a dream, like driving a sports car.”
While the experience was positive for Sharafian in so many ways, one thing she’s observed, now that she’s moved onto director Domee Shi’s new feature film project, Turning Red, is an increased sense of self-confidence. “One of the biggest challenges for me was gaining the confidence to lead for the first time,” she acknowledges. “I was always nervous the first days of working with a new group of people, but since Mike and I would walk around to every artist’s and animator’s office every day, I soon got to know everyone individually. Thanks to all that individual time together, by the time we really got into our groove, I was much less nervous since I felt like I was speaking to a room of friends!”

“I've also noticed, after making Burrow, that I find myself more comfortable speaking up in brainstorming sessions, putting my opinion out there,” she adds. “Of course, I'm not always right. No one's always right. But just having the confidence is new for me. It's not something I had when I started here at Pixar… the confidence to speak up. So, that’s been very, very helpful to me.”

It was also important to the director that she started, and successfully finished, the project, with a happy crew, making a film she’s proud of that she hopes others will enjoy. “Me and Mike, we're happy because we did it! We finished the film with a happy and healthy team, which was our ultimate goal. We always agreed to keep that as our guiding light; it was well worth it, as it's easy to panic and drive the pace as fast as you can. But we stayed true to the theme of the short. And we always told the team, honestly, where we were and what worried us. And we were constantly touched by the help and expertise everyone was willing to offer. So, you know, asking for help is the right thing to do after all.”

“I'm also very excited that this is going up on Disney+ the same day as Soul,” she concludes. “Burrow is the sort of short that I would love for kids to watch over and over and over again so that they don't miss any fun details. That would be very cool. I also hope that someone who watches this film will remember little Rabbit the next time they're in a difficult, lonely situation, and make the brave choice to ask for help with her in mind.”