This year’s selection of 10 shorts, including films by Patrick Smith, Gil Alkabetz, and Oscar winner Frederic Back, showcases a variety of techniques and tones in a celebration of unconventional approaches to the medium. 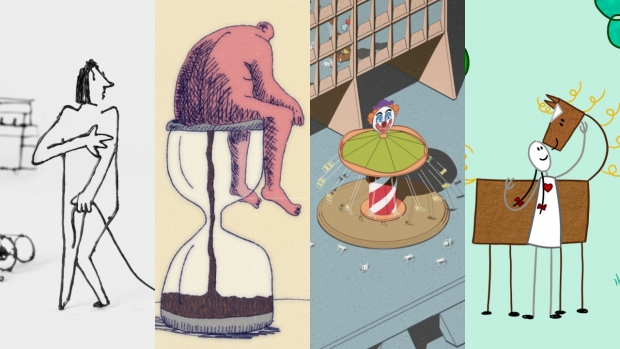 Frontloaded with works that veer more experimental than traditionally narrative, this year’s 22nd Annual Animation Show of Shows - a curated selection of recent shorts representing a variety of techniques, tones and countries of origin - invites us to appreciate unconventional approaches to the medium.

Check out the trailer, then read more about the films:

In the succinct stop-motion entry Beyond Noh by Patrick Smith, thousands of masks from around the world appear on the screen in rapid, rhythmic succession. The facial coverings include traditional examples from Japanese and Mexican cultures, others fit for Halloween depict pop culture icons, and there are even those that became part of our daily routine during the the COVID-19 pandemic. The result is an entrancing and wordless deep dive into the history of masks that reminds us of their perpetual presence in human existence. A rotation of everyday CG objects endlessly spinning to Beethoven's Moonlight Sonata, including a watermelon, a vinyl record, and a disco ball; first puzzle us in Geoffroy de Crécy’s Empty Places. But as the film progresses, we become privy to the places where these inanimate things are. That information opens the door to a post-apocalyptic vision of a world without people. Clever in its reveal, this colorful short turns quietly unsettling.

The two hand-drawn segments that follow, Good and Better and Zoizoglyphe, from Israel and France respectively, ramp up the surrealism. The first one, by Gil Alkabetz, presents a series of eerie vignettes where humanoid figures with extra limbs or strange anatomies resemble famous works of abstract art. Then there’s Gen Z animator Jeanne Apergis’ sound-driven frenzy centering on a flock of bird-like creatures that could also pass for notes on sheet music. Both pieces focus on effectively evoking a sense of disorientation. For those into gallows humor, the highlight comes in the brilliantly incisive Polish title Rain, which calls to mind Don Hertzfeldt’s oeuvre and minimalist character design. On a regular day at an office building a man falls from the rooftop, but before he hits the ground a flying superhero, cape and all, rescues him from certain death.

But once the threat of dying seems to disappear, everyone else in the skyscraper decides to experience the thrill of jumping off expecting the Superman-like figure to save them. Without dialogue and with plenty of humor, director Piotr Milczarek examines collective entitlement and how easily human nature exploits something positive for personal gain. With psychedelic panache, Average Happiness submerges us into a realm of shape-shifting graphs and charts that become sentient as a lecture on economics can be heard in the background. The incessant transformation of these graphic representations of data appear to take the form of a city or perhaps a horde of monsters as numbers and text move along. Though at times repetitive, there’s a bizarre charm to the concept.

In contrast, the stick figures of Aurora, about a girl and her eponymous beloved horse, aim to share a heartwarming message. Through director Jo Meuris’s tender narration, we grasp the relevance of friendships that remain dear to use even when we are no longer physically close to the other party. This short feels like a turning point in the program, as it heads into the last few chapters, which offer more familiarly structured storytelling. Representing Iceland, the Oscar-nominated 3DCG short Yes-People packs an ensemble cast of characters inside an apartment complex silently enduring their individual tribulations ranging from mundane nuisances to concerning alcoholism. Within a few minutes, filmmaker Gísli Darri Halldórsson explores how much we don’t know about the lives of others, even those in our direct vicinity.

Crafted using a 3D pen that gives drawings a unique materiality, the Russian effort Ties, from Dina Velikovskaya, feels at once innovative in its fabrication and nostalgic in aesthetic. As two parents say goodbye to their adult daughter going out into the world, their bond begins to unravel literally as if every object and figure were part of the same thread. Theme and technique marry beautifully in this vision of an unbreakable connection. The pièce de resistance in this collection comes in the opportunity to watch a new restoration of the 1987 Canadian-short The Man Who Planted Trees, narrated by the late Christopher Plummer. Based on author Jean Giono’s short story, this Oscar-winning masterwork by director Frédéric Back tells of Elzéard Bouffier, a selfless shepherd whose purpose in life was to reforest an arid landscape in the French countryside. Set in the early 20th century, the fictional account is told from perspective of a man who meets Bouffier.

Gorgeously rendered, this hand-drawn stunner looks as if the graphite had been molded by the wind so prevalent in the story of a barren land turned fruitful forest. There’s a fluidity to the impressionistic animation that adds to the timelessness of the overall atmosphere. Still, as nostalgic as the 30-minute short is, its message of generosity speaks to our current environmentalist concerns and the notion that one person’s acts can impact the future of generations. This is truly an unmissable chance to witness this extraordinary work. Thanks to producer and curator Ron Diamond, this annual passion project remains one of the most visible platforms for short form animation to reach North American audiences outside of festivals. And even if all the selections won’t appeal to all viewers, the smorgasbord of creativity and artistry presented once again succeeds at showing animation’s limitless modes of expression.

The program hits U.S. cinemas starting tomorrow, December 30. Visit the Animation Show of Shows website and Instagram to read in-depth filmmaker coverage, find a nearby screening you can attend, and browse through past selections of some of the best animated short films ever produced, many available for purchase.

Originally from Mexico City, Carlos Aguilar is a film critic based in Los Angeles who's written for the Los Angeles Times, Variety, The New York Times, The Wrap, Indiewire, among others. Find him on Twitter @Carlos_Film.