Marvel Studios’ 5-episode collection of ‘I Am Groot’ animated shorts finds the mischievous toddler sprouting his childhood wings, produced through a close collaboration between director Kristen Lepore and the VFX studio’s animation director, Raphael Pimentel; the series is now streaming on Disney+. 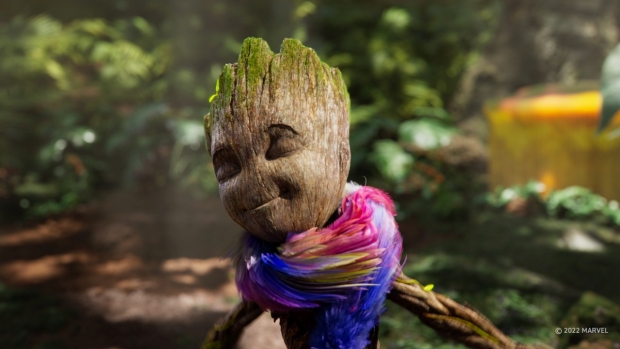 We can’t end 2022 without a look at one of our favorite projects of the year. The hugely popular Guardians of the Galaxy franchise’s adorable little offshoot, I am Groot, a collection of five original shorts from Marvel Studios, debuted last August on Disney+, giving fans what they absolutely craved, namely… MORE Groot! In the collection, there’s no guarding the galaxy against this mischievous toddler! Baby Groot takes center stage in his very own series, exploring his glory days growing up—and getting into trouble—among the stars.

I Am Groot is one of the few all-CG animated projects that’s been released by the MCU and is also the first full CG show of this scale that VFX studio Luma Pictures (the sole vendor on the project) has worked on.

Luma began work early – their creative involvement started during the initial development and story concept stage. With only scripts and basic animatic storyboards in hand, Luma took ownership of initial concept designs, working in collaboration with director Kristen Lepore. This type of close partnership is unusual; on larger films, vendors like Luma usually liaise with the studio’s in-house VFX supervisor, not directly with the director. In this case, Lepore even came to Luma’s offices on several occasions to shoot references and mocap with Luma’s Animation Director, Raphael Pimentel.

“We received these boards in an animatic edit with sound,” notes Pimentel. “The boards gave our Luma animation team three key components, which we referenced in every shot: shot composition, body poses, and facial expression.” The animators presented their work in what Pimentel referred to as “Collages,” a variation of pertinent references, including the storyboards overlayed onto their open GL renders, which he found especially useful in speeding up his review process during dailies.

Luma’s work also involved a progression in Groot’s animation style. In the films, Groot appears in more photorealistic settings among live-action elements, and at first, Lepore and Luma took that realistic approach. However, Lepore eventually realized that these shorts lent themselves to a snappier, more fun animation style. The studio was there each step of the way to understand, translate, and fulfill Lepore’s vision as Groot’s animation evolved.

“Also, because the storyboards were more Groot-centric, it gave us the opportunity to stretch our creative muscles in designing the virtual worlds and characters in the series,” continues Pimentel. “We began our concept designing stage by pitching different versions of Groot, either inside the pot, with various leafy outfits, different shapes, and colors for the squirrel bird and broad variations of the mini civilization characters.”

The various versions were reviewed by Lepore, who guided the team toward the ideal look. Marvel assets built in previous projects were provided and integrated into Luma’s pipeline. Groot’s essence was preserved per the brief from Marvel. “Everything Groot does is cute and endearing,” Pimentel shares. “He may fuss, he’s opinionated, and he has his ups and downs like we all do, but he is loving underneath all the hard wood. From an animation standpoint, from all the nuance in his broad movements and poses, I focused on keeping his eyes wide to the world like a kid does. So, I was very particular with the brows and especially the eyes during our internal reviews. I felt that he looked more connected to the world with wider eyes.”

Pimentel explains that the project boasted an unusually high level of collaboration, especially the opportunity to work closely with Lepore – a highlight for the animation director. “Being able to get into a project so early on and help Marvel and KL realize their vision, from beginning to end, was really rewarding,” he says. “Plus, anytime our animators get to shoot their own references and inject themselves into a project, it creates a lot of laughs and fun.”

As far as challenges, Pimentel acknowledges that every episode had its own because each was unique.

“One thing that sticks out is the tech we built for ‘Groot Takes a Bath,’ namely his foliage rigs,” he reveals. “Our rigging department spent some time developing a hybrid rig for animation that would help FX down the production line. Animators were able to animate the branches under the leaves and also run basic simulations through Maya, giving the FX artists pre-approved timing reference for their final leaf simulations. It was one of those things where we knew that by front-loading the work through rigging and animation and giving Kirsten and Marvel a better representation of what the final simulations would be, they could sign off on the idea early on and know what to expect in the end.” A total of 159 artists touched the project across a one-year production schedule - from June 2021 through June 2022. And it was all in the name of giving fans more of the adorable little sprout, Groot.

Choc Chip Animation Riffs on Pop Culture in ‘The Art of Murder’
F is for Flake: The (Not So) Great Animation Robbery?
Re-VIEW: ‘Avatar: The Way of Water’ – A Miraculous Vision
‘Kung Fu Panda: The Dragon Knight’ Celebrates a Special Lunar New Year
END_OF_DOCUMENT_TOKEN_TO_BE_REPLACED