Pictures from the Brainbox: A Weekly Dose of Indie Animation - 'Ballerina'

Every Monday or so, Chris Robinson asks an animator how they made a particular film. This week: Steven Subotnick talks about his latest film, 'Ballerina' (2018) 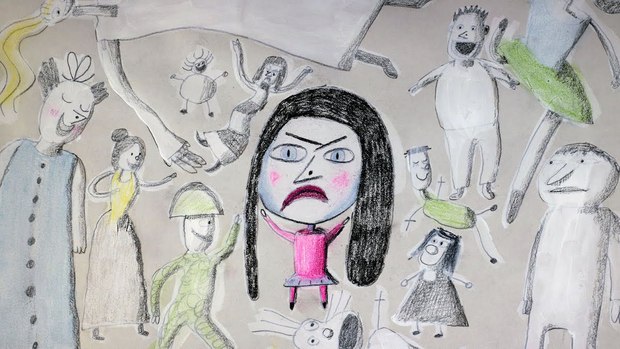 Steven Subotnick has been making independent animations since 1985. His films (e.g. Hairyman, Devil’s Book, Fight, Little Girl), have screened in festivals, galleries and curated shows around the world. He has worked as an animator, director, illustrator and author, and has taught animation at numerous institutions, including RISD and Harvard University. His most recent film, Strange Fish (animated whilst blindfolded!) won the Grand Prize for best non-narrative film at the 2017 Holland Animation Festival.

Since 2011, Subotnick has worked as a prolific rate creating at least one new film a year. His work is playful, varied and experimental.

While going through some old notebooks, I found fantastic character drawings made by my children when they were young.  I made copies of them, including Hannah’s crabby ballet dancer with a big frown.  Hannah had made this drawing after a frustrating ballet class.  I was struck not only by the frown, but also by the dancer’s stiff stylized body, which seemed full of constrained anger and frustration.  The drawing was like a coiled spring of latent energy and psychological angst, and I empathized with this character who seemed about to burst out of her stillness and silence.  I wanted the ballerina to express herself.  I started with the basic five ballet positions.  Beginning early in the filmmaking, I tried different sounds and music with her dancing.  I was looking for a combination that would express the ballerina’s irritation.  The first sound that worked was an old typing tutorial piano recording.  It was regimented and repetitive, as if a harsh ballet master were instructing her.  The idea of the ballet master gave me the idea of interrupting her dance.  The ballet master was too restrictive, so I replaced him with an audience.  By using coughs to stop the music, I gave the audience an off-screen presence.  The structure of interrupting and restarting allowed me to further develop the character’s inner state each time she began.  From then on, I alternated between animating and working on the sound design.  Making the film became an exploration of the ballerina’s inner life, and her relationship with her audience.

I drew and painted on paper with pastel, pencil, ink and gesso.  I wanted the images to be as direct and honest as possible, with little manipulation beyond the initial drawings.  I used almost no compositing or alterations.  I left the errant marks and smudges on the paper.  This seemed appropriate considering the directness of the ballerina’s expression and gaze.

The whole film took about three months to make.

The hardest part was finding the structure of the film. There were three elements to this structure: image/animation, sound, and editing.  First, there was the structure of the image and animation.  I wanted to keep the ballerina anchored in the center of the screen like an icon, so there would be no escape from her crabby gaze.  I shot her basic movements, then added drawings to the frames, reshot, added more drawings, and so on – building the image as I went (the frames were permanently transformed by the end of the process).  So, the structure of the images was based on repetition and addition.  Then there was the soundtrack.  Some sounds represent what is going on inside the ballerina’s head, while others represent the audience and the music she is dancing to.  So, the structure of the sound is like a dialog between the dancer and her audience.  The last structural element was the editing.  I made these different sequences independently of each other, and I repeatedly re-edited their order to understand how they would work together.  The edit creates the idea of the ballerina coming on stage, performing a series of dances, and then finishing to the applause and exit of the audience.

Yes, it was.  The process of making the film was the process of getting to know this character.  I started with a visual fascination with the drawing, and then used the filmmaking to learn more about who she was.  There was no planning or boarding.  It was as if I met an intriguing stranger and got to know her through an artistic dialog.  The film is a record of that process.