An in-depth look at TWO and PIG, recent experimental-narrative animations by Steven Subotnick. 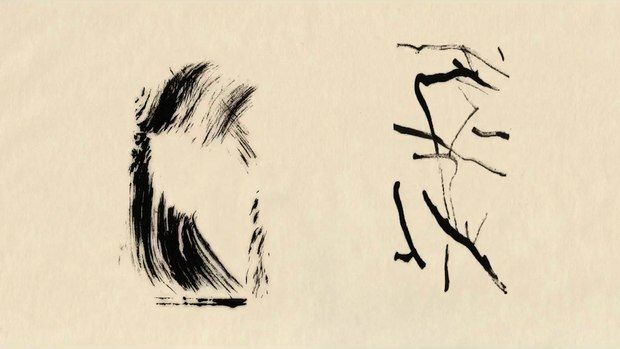 What is it that I love about Steve Subotnick’s films?

I could tell you right away but then I’d be telling you more about myself than about Steve or his films. So I’ll begin by describing the animations themselves, focusing on TWO (2011) and PIG (2015) - and we’ll leave my opinion to the very end.

TWO begins with a still, ivory coloured frame. We’re no more than a couple of seconds in when suddenly hand scribbled 2’s flash onscreen to the sound of rapid rifle shuffling of a deck of cards. This lasts about 7 seconds and fades out.

Ink marks describing the outline of a vertical rectangle fade in on the left half of the screen to the sound of an extended deep bass note. Similar marks fade in on the right. The sound has become more complex, like that of a beating heart. The tone fades off and we’re left with the pulsing heart.

Then suddenly out of nowhere, an audible “sniff”! and with that sniff the outline on the left becomes filled with black ink. The rectangle switches to others of identical size with markings of wet ink and gritty charcoal.

Now a higher pitched tone runs over the beating rhythm. And the painted rectangles on the left flash faster. And suddenly the rectangle on the right becomes animated with similar black textured marks. Now the audio rhythms are challenged by a haunting rapid string melody, and a couple of seconds later ... rapid rifle shuffling of the deck of cards as a number of rectangle paintings flash in place.

Subotnick has two visual elements in dialogue with each other - gentle blending to sudden flashing of black rectangular paintings, one set on the left, the other on the right. And a number of audio elements that support the visuals - rapid rifle shuffling of a deck of cards synced to the rhythm of the flashing paintings, a string melody when the paintings gently blend into one another, simple tone over the still moments (there are some still moments), and found sounds over the sudden shifts and changes.

the pig is everything

PIG opens with a man’s sleeping head. His cabin rhythmically exhales chimney smoke into the shape of a roasting pig. The head jolts awake to the letters “ P i g ” and the imagery of a pig scampering through the forest. Two worlds in curious collision and the chase is on.

Subotnick effectively uses text throughout the film as a metaphor for the human - one who should be a rational creature. But this is a human defined by appetite.

Joel Frenzer’s accompanying voice overs alternatively bring out that human creature’s most gutteral and base attributes, including its pig aspects. “Who is the real pig here?” Subotnick is asking. The film closes with light touches of music that leave plenty of room for the viewer’s imagination to conclude the plot line.

While PIG is more figurative and has more story than TWO, both experiment in different ways with narrative elements. They are equally dramatic though Subotnick uses different tools to entice us into that drama. TWO is made up of flat, 2D abstract images in a rapid fire pacing, PIG morphs from extreme close-ups to long shots to everything in-between.

Subotnick’s recent animations are tight and powerful. His visuals and sound powerfully support the narratives. There are no extraneous moments or marks in these works yet they are open enough to allow me to both enter his world and make sense of it within the context of my own experience. What's not to love?

Steven Subotnick’s films screen regularly at animation and film festivals. You can catch PIG - his most recent film - online, or on the big screen at the upcoming 2015 Ottawa International Animation Festival (great festival, great films - check out their 2015 selection.)

For more info on his work and upcoming projects, see his website.

‘My Dad the Bounty Hunter’: Representation Beneath the Skin
The Massive Creative Fellowship Behind ‘The Lord of the Rings: The Rings of Power’
‘The Dragon Prince’ Director Villads Spangsberg Talks Toonlines and Tough Challenges
Laurence Fishburne and Steve Loter Talk ‘Marvel’s Moon Girl and Devil Dinosaur’
Taking an Old-School VFX Approach in ‘All Quiet on the Western Front’
‘Natural Habitat Shorts’: Like ‘Ranger Rick,’ But for Adults
Framestore Sets Sail on ‘1899’ with New Virtual Production Tools
VFX is the ‘Thing’ for Tom Turnbull on Tim Burton’s ‘Wednesday’
END_OF_DOCUMENT_TOKEN_TO_BE_REPLACED