Pictures from the Brainbox: A Weekly Dose of Indie Animation - '4min15 au révélateur'

Every Monday or so, Chris Robinson asks an animator how they made a particular film. This week: Moïa Jobin-Paré's '4min15 au révélateur'. 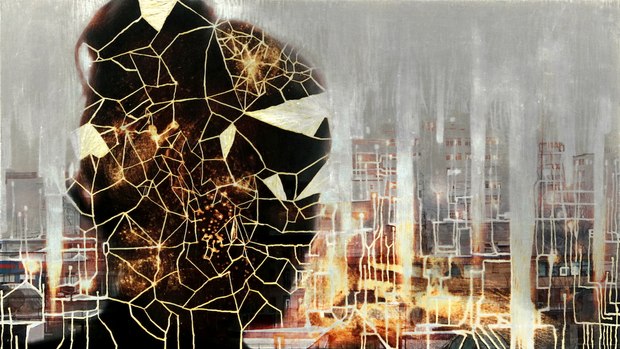 Canadian artist – and drummer - Moïa Jobin-Paré is a relatively new voice in the animation festival scene. She landed loudly a few years ago with her beautiful experimental work, 4min15 au révélateur, which takes a unique look at the relationship between individuals and urban landscapes.

While working on a new project with the National Film Board of Canada, Moïa took a breather to talk about her award-winning (i.e. including awards from Annecy and Ottawa) debut animation short.

I chose the themes, the materials, the technique and then it was all to be discovered, no storyboard. I filmed, with a digital camera, my sister and the urban landscape, both in my flat / through the window. I spent some time organizing the images and decided which parts would be modified by hand. Then I scratched a bunch of frames, after they were printed on photographic paper. Once they were modified, every photo was digitalized so I could put it back in the computer to do some compositing, and the final editing. So it’s a mix of digital and analog materials. When the final version was ready, I gave it to Simon Elmaleh who made the soundtrack.

A long time ago, I discovered by accident all the textures, colors and light that could come out from scratching the emulsion of silver printed photos. I don’t know why, but I love to create an image starting with one that already exists, by removing colors and informations. Obviously, I love to observe things, and go underneath the surface. I enjoy scratching also because it’s a physical experience.

So…after I made some animation tests, I thought it might be interesting to make a short film, using this scratching technique, with the idea to bring my work to another level and share it. Moreover, animation came up to be the perfect way to put together different ways of expression I am fond of: moving images, graphic art and sound.

The idea emerged in 2013, I started filming in spring 2014 and it was finished sometime in 2015. But there were long periods I didn’t touch anything at all. And it took me forever just to find the title… don’t ask why I do films with no dialogues!

The most difficult was to deal with my own fears, because I didn’t know what was going to happen, and if something interesting would come out of this project. While building the images, my own perceptions were often very negative, but I kept on going. It seamed that people around me had more faith in what I was doing than I did, and I’m glad I listened to their encouragements.

Absolutely… Now I know there is no real danger in making animated films…as long as I’m careful when using blades!