The husband-and-wife team move from orchestra to rock, electronic, and hip-hop as they score the hit DreamWorks Animation series, working to ensure the music sounds similar, but not the same, as the huge ‘Fast & Furious’ feature film franchise that started it all. 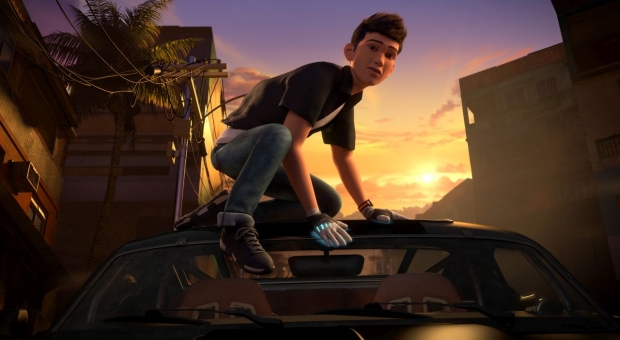 From the moment he came on board, TV music composer Ryan Lofty felt a strong, personal connection to DreamWorks Animation Television’s Fast & Furious: Spy Racers; composing music for the series always brings up memories of his and his father’s shared love of automobiles.

“Cars are a big part of my family,” says Ryan. “My dad restores classic cars and loves NASCAR, so there’s something in my soul that naturally translates car racing into music. It’s a dream job and if Netflix kept renewing, it I would happily work on it forever.”

Bret Haaland’s and Tim Hedrick’s Fast & Furious: Spy Racers the famed, fuel-powered franchise into the world of CG animation, this time in series focused on Tony Toretto, cousin of the famous Dominic Toretto. The show follows Tony and his friends who all start out as young, city street racers but, in a twist of fate, find themselves recruited by the government as world-traveling spies.

Ryan and his wife Courtney Lofty composed together on Spy Racers, co-scoring with Ninjago’s Jay Vincent, occasionally getting to write songs. While Courtney also shares her husband’s extreme admiration for the series, she says her passion derives more from the visuals than nostalgia.

“It’s the SFX for me,” she notes. “The splatters, camera shakes, dust, smoke, and lighting are a big part of what makes the car chases so exhilarating. I love Tim Hedrick and Emma Dudley’s writing on the series, which lands an extreme number of jokes and references per second, all while dreaming up crazy stuff like backflipping a car through a fire tornado.” Courtney and Ryan previously worked on other DreamWorks Animation shows like Cleopatra in Space and Doug Unplugs, but Spy Racers was unique for the musical duo as it was their first time working on a project based on such an iconic franchise. “The team wanted the sound of the TV series to be similar but not the same as the Fast & Furious films, so it’s on-brand but unique,” explains Ryan. “In the beginning we watched the films looking for ideas that could be adapted. The soundtracks span from orchestra, to rock, to electronic, to hip-hop.”

Courtney adds, “Our original demo of the Spy Racers pilot featured 11 electronic pop punk cues with song hooks which, upon reflection, was possibly too bold.”

But eventually the music was narrowed down to mainly spy action orchestra, modernized with trap and hip-hop beats accompanying the spy racers as they zoom through the jungles of Rio or race across the Sahara Desert. “The spy racers go somewhere new every season, so not only do we get to write slamming trap orchestral beats, but reset the instrumentation so it always feels fresh,” Ryan continues.

The films’ “other flavors,” as Ryan puts it, are represented in the licensed music, and reflect the strongest theme of Fast & Furious, which Ryan and his father relate to well. “Thematically, of course, we’re all about family,” notes the composer. “Family” has been a core concept in Ryan and Courtney’s musical projects; they work hard not only to create entertaining scores and soundtracks, but also create accompaniments that are appealing to members of the whole family and audiences of all age ranges. “We try to embody the DreamWorks music motto: ‘No kids music, just great music,’” says Ryan. “Even for Doug Unplugs’ preschool audience, where it is important to punctuate physical comedy, we’re experimenting with new methods to meet the team’s goals of an elevated score. Fast & Furious: Spy Racers has longer episodes and arcs, so there’s more room for themes that track with character and storyline development. It’s scored more like a feature film. We never talk down to or underestimate the intelligence of our audience, which hopefully makes the music appealing to all ages.”

Courtney adds, “The sound mixing by the team at SoundRebels is world class, the audio is crystal clear, and we love a loud music mix.”

The audience is the focus throughout the whole process of scoring, from the time the composers first receive the locked picture to analyzing music for day versus night and Threshers versus Crawlers.  “At the beginning of a series, we aren’t shy about requesting additional assets,” says Courtney. “For a score, we join in post-production where the team has already been working on the show for two or more years so if they are OK with us checking out the show bible, scripts, boards, and any concept art, we’ll devour it all and spare them a million story questions on the spot. If we join as songwriters in pre-production, dialog samples are surprisingly helpful to quickly grasp the tone of a show.”

“Animation is a team sport,” Ryan notes. “The Executive Producers, or the coaches in this analogy, come in with an idea about how the visuals and music are going to work together, and we are only one player at their disposal. I’m a big fan of the sound designers, and how each of the cars has its own unique engine noise, which is another massive part of this show’s sound.” And it’s their “team” which Courtney and Ryan credit with not only creating a mosaic of good vibrations on the show, but also with helping them kick into “overdrive,” as Courtney says, to continue to create great music for Spy Racers through the pandemic and days of quarantine. “The week the world shut down, we were writing holiday songs, which was surreal,” Ryan recalls.

“We worked through a lot of heavy life events where summoning happiness and creativity on command sometimes felt like an out-of-body experience,” Courtney continues. “DreamWorks has always been great, checking in on us and adapting schedules. We all help each other keep going.”

In the end, for the couple, the joy of creating music still circles back to family. “The reward is getting to spend every day making things with my wife,” says Ryan. “We’re proud to have contributed to this awesome series and thank everybody at DreamWorks Animation for bringing us along for the ride.”