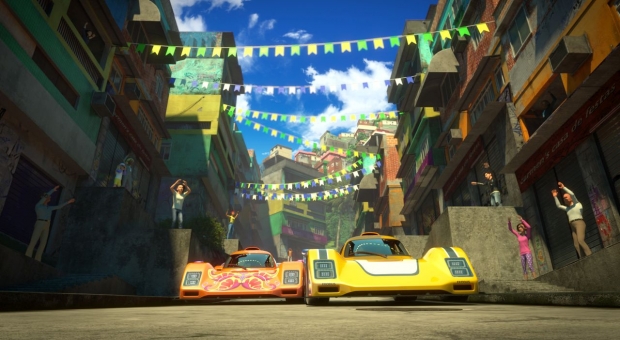 The story centers around Tony Toretto (Tyler Posey), the teenage cousin of Fast & Furious superstar Dominic Toretto (Vin Diesel), who believes he was born to sit behind the wheel, inheriting his family’s taste and skills for street racing. In Season 1, Tony and his friends were recruited as government spies, ultimately preventing “world domination” by infiltrating an elite street racing league serving as a false front for the crime organization SH1FT3R. Season 2 takes Tony and his friends abroad to Rio de Janeiro, where they work undercover to find fellow street racer and former SH1FT3R member Layla Gray (Camille Ramsey), who has gone missing.

Spy Racers is executive produced by Diesel with The Fast and the Furious franchise production veterans Neal H. Moritz and Chris Morgan, along with Avatar: The Last Airbender’s Tim Hedrick and Penguins of Madagascar’s Bret Haaland, who both joined the team to help bring Thompson’s vision to a younger audience. “When Universal bought DreamWorks Animation in 2016, they came in with two gigantic properties: Jurassic Park, and Fast & Furious,” says Hedrick. “Those were the two prime opportunities to make animated shows, and we came aboard to create a kid-friendly version of the excitement, the action and all the things Fast & Furious is while bringing it to an audience of kids who can't necessarily go see the movies.”

Spy Racer’s friendly Universal Pictures neighbor, the animated series Jurassic World: Camp Cretaceous, released on Netflix last month, was created with the same familial purpose in mind - to bring thrilling, classic action stories to kids without crossing over the line into the violence and fear factors that are central to the films. While Spy Racers retains all the familiar excitement of Thompson’s car chases and dangerous races, Haaland says there are clear lines they won’t cross with the show. “The real basis for this type of animation is so that kids can enjoy Fast & Furious in a safe way,” he explains. “As we’ve seen, the movies can be quite intense and quite violent. We do have our own level of violence in the animated show, but it’s a level we consider to still be safe. We don't cross those lines. We want to keep the intensity level to where children can really get into it and where their parents can still relax and say, ‘Hey, you know what? They can watch all these, and I don’t have to worry about it.’”

“And the theme of Fast & Furious is all about family,” adds Hedrick. “That’s something kids can really buy into and identify with. The response has been really good for parents and kids watching together from the first season too. We try to make it entertaining for the whole family.”

The family focus dynamic is not only prevalent in Spy Racer’s storyline and animation, but also in the voice acting. While Diesel has a voice acting role as Dom in the series, his daughter, Hania Riley Sinclair, also plays the role of Sissy Benson, the sister to Tony’s friend Frostee Benson (Luke Youngblood). “It all really ties together,” says Hedrick. “Often, when Diesel comes in, Hania will come in as well and that's really fun, because she keeps him loose in the booth while he's recording. It’s really cool to see them together.”

The show’s second season takes place in Rio, the same location as Fast Five, with memorable car stunts like driving out of a flying airplane and leaping across buildings, paying homage to the animation’s origins, minus the dragging a large vault through the streets during a police chase. But despite the setting and the fact that The Fast and the Furious has already pocketed nine films with a tenth on the way, Hedrick and Haaland say there’s still “a lot of room in the world to explore,” especially in regards to CG animation. “It’s a different angle on the entire franchise, the way it explores the world,” says Hedrick, Spy Racers being his first 3D/CG animated project. “One of the things that is a real challenge in CG production is building a whole new location. When you go to Rio and have to build these neighborhoods and Favelas and beaches that cars are going to race through and build the town square where they arrive, it's just so much work. It’s like building a set where you’re going to shoot the movie. It blew me away. That's one of the big things about CG that my eyes were opened to, how challenging it is to build this world and have it be big enough so that you can stage these big stunts.”

In bringing new animated life to the Fast & Furious world, Haaland and Hendrick say that one of the biggest challenges was getting the cars right, from the way they looked to the way they moved.

“It’s been a trial by fire, but incredible and having Bret around was definitely helpful,” Hedrick says. “I think what Bret and his team do well is bring a lot of weight to the vehicles and really make them feel like they're physically interacting in the world. Sometimes, when you see animation, it's almost like everything is weightless, and it's just kind of floating around. It makes the action feel like there's no stakes and no gravity in the world. But we wanted to see these cars, when they go around the corner, really slide and their weight shift on their wheels. It’s these kinds of subtleties that really sell the action and make you buy into the world.” Haaland adds, “We have a higher shot count in this show than most animated shows for that reason, because there's a lot of cut scenes. When things land and you get the physical reality of these cars and people reacting while they're driving, it almost feels real, but it's got just a little bit more of a broadness to it and brighter colors. Fast & Furious is all about the cars, so we've worked very hard to create some unique cars - sports, electric, muscle cars, monster trucks - that express these characters’ personalities and help give this world its own reality.”

Season 2 of Spy Racers has “a ton of action in every single episode,” according to Hedrick, who says the team “really tried to cram it completely full.” There’s Formula One car races through Rio’s Favelas as well as through Brazilian jungles.

But Spy Racers isn’t just about the action scenes, but also the good-natured youth humor. “There's a great episode where Gary and Tony are watching some surveillance footage and they make up dialogue for what they think the bad guys might be saying,” says Hedrick. “It ends up with them saying these bad guys are in a space battle. And one of them is pregnant. It’s been really fun getting to bring out a little more comedy that way.” “Now more than ever, people need to be able to sit down and enjoy and turn off their brain for a bit and just relax,” he continues. “There’s a lot going on in the world that’s very upsetting right now. And Spy Racers is a complete escape from that. If everyone can sit there and enjoy it as a family for three hours, then our work is done.”

In addition to engaging a younger audience, pushing the boundaries of CG animation, and giving families a comedic escape, Spy Racers also achieves a personal animation goal for Haaland. “I want to continue to blur the lines between the quality of television animation and feature film animation,” he explains. “I do believe that we've raised the bar a little bit on animated TV shows here. I think, given the schedule we were under and the tremendous pressure from many different powerful people, I feel that we pulled off some pretty high-quality scenes in action and acting.”

Hedrick adds, “Right from the beginning, we really came at it as if we were going to make an animated feature. So, we brought in some very talented people who have worked on big projects like Avatar to help create the look of our world. It was very ambitious and so, for me, writing the show, I just wrote it as if it were going to be one of the movies, and we just tried to pull it off as much as we could. It's definitely challenging. But that's kind of the excitement.”

Choc Chip Animation Riffs on Pop Culture in ‘The Art of Murder’
F is for Flake: The (Not So) Great Animation Robbery?
Re-VIEW: ‘Avatar: The Way of Water’ – A Miraculous Vision
‘Kung Fu Panda: The Dragon Knight’ Celebrates a Special Lunar New Year
END_OF_DOCUMENT_TOKEN_TO_BE_REPLACED