As the fifth and final season of Netflix’s expletive-laden animated comedy series ‘F Is for Family’ finally premieres, co-creator and showrunner Michael Price reflects on what it all means to him and the Murphys. 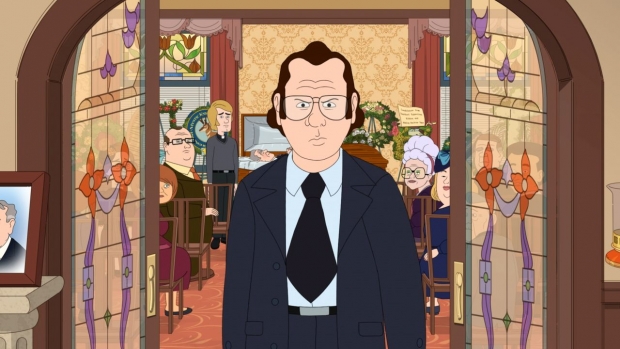 For four seasons, since the long-ago days of 2015, F Is for Family creators Bill Burr and Michael Price – who also serve as writers and executive producers on the show – have been tireless in their efforts to put the “F” back in family. Inspired by the life of stand-up comic Burr, who also plays the lead character, Frank, the hilariously expletive-laden animated comedy series follows the Murphys, a dysfunctional suburban family living in the fictional town of Rustvale, Pennsylvania in the 1970s – “a time when political correctness, helicopter parenting, and indoor smoking bans weren’t part of anyone’s vocabulary, let alone the norm.”

In the fifth and final season, which premiered on Netflix November 25, the Murphys are rocked by the loss of Bill’s father, with each character responding in their own individual way: Frank’s wife Sue tries to patch things up with her parents and her estranged gay brother Louis; son Kevin drives his girlfriend Alice crazy with his clinginess; siblings Bill and Maureen process their grief by acting out in uniquely transgressive fashion; and Frank sets off on a quest to understand the meaning of his father's life and make himself a better husband and father.

As the show concludes its run – and as here in the real world we lurch from one environmental/medical/cultural crisis to the next – it seemed like an auspicious time to take an in-depth look at a program set in a very different cultural moment, yet one that also shares some unsettling similarities to the present time.

To guide us through the many creative and thematic aspects of F Is for Family, we spoke with co-creator and showrunner Price, who, in addition to his work with Burr, is also a longtime, multi-Emmy-winning co-executive producer and writer for The Simpsons. AWN: Can you start by talking a little about your relationship with Bill Burr?

Michael Price: From the moment I met him, I knew that we shared a very similar timeframe. We're from different areas – I'm from New Jersey and he's from Massachusetts – and I’m a bit older, but we had this very similar perspective. Bill talked about things like childhood bullying – things that in more recent years have come to be seen as more serious. People who are millennial-aged would be like, “Oh, that's so sad.” And Bill's like, “No, it's funny.”

MP: Well, it's a little different now than it was when we first started. When we were first developing the show and also for the first couple of seasons, Bill was in the writers’ room almost every day. He was the star, he's the co-creator, he's an executive producer, but he was sort of learning what it's like to be in a writers’ room. So he was very humble and would just sort of say, “I'm just one of the guys who are throwing out jokes.” But his jokes, of course, were great.

And now, for the last season or so, the rest of his career has gotten bigger and he's not with us as much as he was in the past. But one of the great joys is, right when we're getting ready to put a new script out, he'll send in his jokes. And they're always better, there's always stuff that I would never think of or that the other writers would never think of. He has a voice that's hard to duplicate; we try our best to channel it, but then he'll find ways to tweak it here or there and just make it like himself. AWN: What would you say distinguishes this show from other adult animated family shows, apart from the time period?

MP: I think it’s in keeping it real. Even though we're animated and even though there's crazy things happening, we always try to keep it emotionally real. We have hilarious writers and we're coming up with really, really funny stuff. But, at the end of the day, we look at what's going on with the characters and try to ensure that it makes sense emotionally and is not just being done for the sake of a joke.

The way we write the show is that we really, really focus at the beginning on story, and on character, and on character development, and taking the characters in different places and really plumbing what these people would be experiencing. And as long as that makes sense to us, and we're telling a story that feels right, then I trust that our amazing staff of hilarious writers will find a way to make it funny.

AWN: Animation allows you to get away with stuff that you could never get away with in any other medium. How do you navigate with regard to what's okay, and what's not okay? Does Netflix jump in at all?

MP: Netflix has been very supportive in letting us do what we do. There's hardly ever been a time where they said, “Don't go there, don't do that.” And when they do say that, we listen to them because they say it so rarely. But for the most part, we follow our own internal barometer. It can be tough because we're presenting things from 40-plus years ago, when people spoke differently and said different things. So we have to be a little careful with regard to the sensibilities of today. But that's about it. We don't really pull back from much, because that's what our show is – shining this kind of weird backwards satirical mirror on the way things used to be as a way of illustrating how crazy they were. I’ll say one more thing, though. We first came up with the idea for this show almost eight years ago, the end of 2012, beginning of 2013. And I remember my attitude then was, “This will be really funny because we'll show all this racism and all this sexism and, wow, isn't it funny how far we've come?" And now we're right back there again. We haven't changed the show at all, but I think the way it's being seen might be different. In any case, I'm certainly less smug about how far we've come. Because if you look at the world today, we haven't come that far at all.

AWN: You introduce a new gay character, Sue’s brother Louis, in Season 5. What led to your bringing on that character now, and how did you approach his part of the story?

MP: This was a character that has always been a part of the world of the show. There was an episode in Season 3 when the family goes on a little vacation to a lake cabin, and it turns into this godawful fiasco, with a rainstorm and everything. That's the first time we mentioned that Sue had a gay brother, and it became a thing for Frank, knowing that it was a sore spot for Sue's dad, and that he and the brother were estranged.

He was mentioned again in Season 4, and then, in Season 5, when Sue's goal is to mend fences in her family, we said, “Wow, now we have a chance to get him into the show.” And of course, he's being played by Neil Patrick Harris, who just made him really come alive. Louis is a guy that doesn’t apologize for who he is, and he doesn't really want to get back together with his dad, and Sue goes to some crazy lengths to make all that happen.

Frank has a really interesting relationship with him, where he admires him, but Frank is also a product of his time, so he's got his own little biases as well. Then, at one point, Louis and his father discover that the one thing they have in common is that they both hate Frank. So that’s something that brings them together. AWN: Apart from everything we’ve already talked about, can you divulge any more about what’s coming in Season 5?

MP: Well, we have the great Patti LuPone joining our cast as Frank's mom, who lives in California with Frank's grown-up sister. It was such a treat for me to work with her because I’ve been a huge fan of her work forever. We also get to see a whole other family this year, which is the family of Kevin's girlfriend, Alice. Fred Melamed plays her father, Dr. Goldman, who's a psychologist and they’re an observant Jewish family. As we've learned from earlier seasons, Kevin really doesn't have much of an idea of what it means to be Jewish, so that turns out to be a big thing.

We also have a really cool appearance by a band that Bill found, this all-female band who were a big deal, but who’ve kind of been overlooked since then. The band's name is Fanny, and they were one of the first all-female rock bands in the early seventies. It's the first time we've ever had real people, guest-starring as themselves.

And then there were two things on our wish list that we've been trying to do forever, and because it was the last season, we went for it. One is that Bob Pogo, played by the amazing Dave Koechner, has a whole story unto himself where, because he comes into some money, he decides to go after his dream – which we mentioned way back in Season 1 – of finding a place that only serves chicken skin. So he opens a chicken skin restaurant called Skinnies. And we also finally created a character who’s our version of Evel Knievel, called Buster Thunder Jr., who's voiced by Chris Edgerly, who we see throughout the season wiping out, and the whole season winds up with a big jump by Buster Thunder at the airport. Really fun. And then of course there's a new baby that the Murphys have to deal with, and that sets in motion stories up and down the whole family about Frank being a new dad again, and Sue raising a new child, and how the other kids react to it. And we discovered at the end of Season 4 that one of my favorite side characters, Vic, played by Sam Rockwell, is a father too. So he's going to be raising a new child. I know there's some speculation out there that he's not really the father, but he loves this kid and, as he says, “I get into shit.” So he gets into being a dad.

AWN: Looking back over the series as a whole, what are you the proudest of? Or, alternatively, how do you hope people will remember the show?

MP: We’ve gotten so much response from people who will say, like, “Oh my God, that's my dad,” or “That was my family.” Or some people have written saying, “It helped me deal with my relationship with my mom or with my dad.” And that’s where we've slowly been moving, over the course of these five seasons. Taking this guy, Frank, who has so much emotional baggage, and developing him as a person, and finding these layers – who his father was, who his mother is. The story of the show is about a guy who learns to be a better person, to be a better father, to be a better husband, and who realizes that you don't have to be the product of who your parents were, or how you were brought up. You can change, you can find a way to make things different, and hopefully make it better for the next generation.