It’s time for Bill to come to terms with the past… F-that! See what’s coming in the fifth and final season of comedian Bill Burr’s raunchy, hilarious look at the 70s; Season 5 premieres November 25. 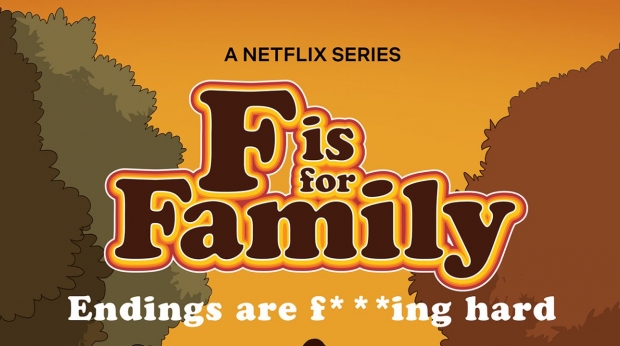 Netflix has just released key art and the official trailer for F Is for Family’s fifth and final season, which premieres Thursday, November 25. The hilariously expletive-laden 1970s-era animated comedy series is inspired by the life of stand-up comic Bill Burr, who voices the lead role of Frank Murphy. The series “transports viewers back to the 1970s, a time when political correctness, helicopter parenting, and indoor smoking bans weren’t part of anyone’s vocabulary, let alone the norm.”

In the new season, as 1974 comes to a close, the Murphys are rocked by loss, each responding to it in very different ways. Sue tries to patch things up with her parents and estranged gay brother Louis; Kevin drives his girlfriend Alice crazy with his clinginess; and Bill and Maureen process their grief by acting out in uniquely transgressive fashion. Meanwhile, Frank sets off on a quest to understand the meaning of his father Big Bill's life and, in the process, make himself a better husband to Sue and a better father to Kevin, Bill, Maureen and new baby daughter Megan.

In the trailer, Bill attempts to come to terms with the past while coming to blows with the present – check it out: