‘Encanto’ Pushes Animation Boundaries While Celebrating the Fundamentals of Family 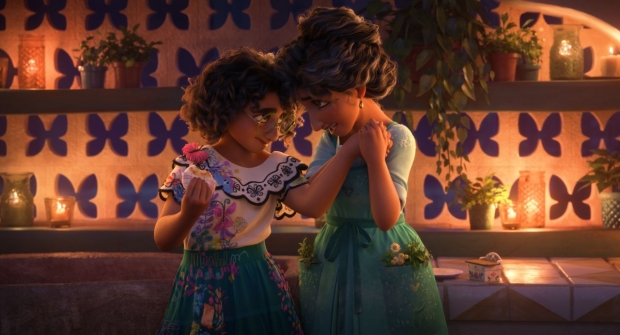 As demonstrated by the release of their new computer-animated musical feature Encanto, it’s safe to say that Walt Disney Animation Studios has gone beyond anything they have done before.  The film takes viewers through the enchanting mountains of Colombia, into a magical house, where all the members of a unique family have been blessed with special gifts, from super strength to healing. Well, all except for one family member: Mirabel. The young girl is determined to prove her value as the only “ordinary member” in the Madrigals family; she seizes an opportunity after learning the magic surrounding their Encanto - the magical place where her family lives, and which grants them their powers - is in danger.

Directed by Byron Howard and Jared Bush, co-directed by Charise Castro Smith, and written by Smith and Bush, with all-new songs by Lin-Manuel Miranda, Encanto represents a departure for the studio on multiple levels.

For starters, it’s emphatically a movie about a family – and, more universally, families. (As the press notes put it, “Before the setting was chosen, before even a single character was imagined, the filmmakers decided that the heart of their new film would be family.”) And while Encanto undoubtedly celebrates this fundamental human association, it also considers the complicated and sometimes fraught relationships that are characteristic of families – even those that may happen to have magical powers.

Beyond this, while past Disney films have been set in exotic locations and/or depicted different cultures, Encanto’s expansive embrace of the diversity, culture, people, and music of Colombia is of a different order of magnitude. Further, as director and co-writer Bush points out, “So much of Latin America is a combination of Indigenous, African and European heritage, and Colombia is considered a ‘crossroads of Latin America’.” Thus Encanto is not only an exploration and evocation of one South American country, but also, in a larger sense, a celebration of all of Latin American culture.

Finally, from the development of a visual tool that actually emulates a hologram to create specific effects, to the deployment of an eye shader that adds another layer of realism and control, the technical advances incorporated in the production of Encanto mean that it looks different from any Disney film that’s gone before. The depth and richness of the scene composition, choreography, lighting, and animation is outstanding.

We spoke with Howard, Bush, and Smith, as well as producers Yvett Merino and Clark Spencer, about the wealth of narrative and thematic milestones achieved by Encanto, and the magic they used to bring it about. Not surprisingly, one of the first things the directors mentioned was the incredible teamwork, and the commitment and effort of everyone involved.

“The amazing thing that happened on this film is that we made big asks of everybody,” Howard begins. “We made big asks of our character design teams, our simulation teams, and our animators, really wanting a lot of very specific, important, emotional things for all these characters. Characters had to have different natural Afro-Latin hairstyles, costumes that were specific to Columbia, not to mention singular acting and singing styles. So we asked for tons and tons of specifics, and we kept asking, and the team kept delivering.”

Adds Bush, “I'd say the key difference on this movie, as opposed to all the other ones we've worked on, is Charise. She brought this emotional connection and that infused the entire production. We all got to know each other really, really well – not just the three of us, but the entire team. And before any sequence was issued, we would just talk about the emotional headspace of the characters in that scene, what was happening there. I've never done that before at that level of specificity.”

Adding to the challenges was the fact that not only is Encanto about a family, it’s about a big family.

“What was really hard was trying to figure out how to tell the story when you're tracking 13 family members,” says Spencer. “We needed the audience to invest in all 13. But that was the goal from the beginning – to tell a story set in one house with three generations, tracking all of these characters, and yet still telling the main story, which is about Maribel.”

The narrative depth and complexity in Encanto extends even to backstory elements, as in the elaborate scenes involving Luisa and Isabela. As Castro explains, she and Bush were extremely fortunate to have the luxury of a long development period, during which they were able to fine-tune the many relationships and character arcs. “Jared and I wrote so many drafts of the screenplay that every character in this family began to feel like someone that I actually knew,” she shares. “There was so much work that went into creating all these characters, so many iterations, that they really started to feel like real people. And because we had such an amazing team of animators and story artists, many of these ideas that we had about specifics of character just became folded into the action, into subtle sort of gestures that the animators were able to capture.”

To ensure verisimilitude with regard to all aspects of Columbian geography and culture, the filmmakers established a “Cultural Trust” early in the production’s development. Among the consultants were Juan Rendon and Natalie Osma, Columbian documentary filmmakers who met Howard, Bush and Spencer while working on a behind-the-scenes project for Zootopia.

“We sought experts in Colombian culture, anthropology, costume design, botany, music, language and architecture, among other areas,” says Merino. “And Juan and Natalie really were key to that. We would meet with them constantly, and they really helped us build this.”

“The Columbian Cultural Trust was involved throughout,” Spencer concurs. “And, to Yvett's point, in that collaboration we learned things that helped inform the story. So it's not just about one aspect of it, because they would tell a story about something, and that would provide inspiration that helped shape the entire movie.”

And then, of course, this being a movie, there was also a visual component. “Very early on, Charise came up with sort of a key word for the approach to cinematography and lighting that both Jared and I loved,” Howard says. “It was this idea of the film feeling romantic – not romantic as in passion between two people, but romantic as in heightened in spirit. Since the writing and the characters are so influenced by this feeling of magical realism, then the lighting should feel the same way.”

He continues: “Things that are beautiful are kind of extra beautiful, things that are normally vibrant are extra vibrant. That depth of focus, the softness in some of the scenes where these encounters between characters are so personal, it goes way beyond what I think we've done in the past. And again, the great thing is that the technology is now there. So if we have a specific lens choice or a vignette or a palette that we're looking for, the cinematographers can totally go for it.”

One of these new tools was the above-mentioned eye shader, which, Howard relates, VFX Supervisor Scott Kersavage proposed as an option early in the production.

“He got us together and said, ‘Would you guys want to try this on this film? This is new technology and no one's done it before,’” Howard recalls.  “So he showed us our previous eye shader, and I was like, ‘Oh, it looks good,’ and he said, ‘Now take a look at this.’ And he went click. And suddenly the eyes fully supported refraction and all the caustics and highlights across the eye were so beautiful and real and viable. And this movie, which is about emotional connection, and so much of it is done through nuanced acting, we just said, ‘We need to do that.’” In addition to all of the envelope-pushing technical, cultural, and familial aspects of Encanto, the film also deals with some potentially disturbing themes. The story unfolds as the Madrigal family is fleeing an attack on their village, and the film doesn’t shy away from exploring both familial and societal injustices. Asked how the filmmakers found the right balance between    the reality of the world being a dangerous place and the need for Encanto to be family-friendly, Smith says it took some doing.

“Encanto is based a little bit on my own experience with my own family,” she confides. “My grandparents and my mom came from Cuba when my mom was a child. And, when I was young, my childish understanding of what that was like made me think of them as superheroes almost. And it was really another thing for me to consider what it must have been like to come to a different country where you know no one, and to understand that in a more mature way. So I think that duality between being a mythic superhero and a more grounded understanding of what Alma has gone through actually was something that was part of the movie from early on. But it really took a lot of time and careful calculation and balancing to make this palatable for children, but still feel real and representative of that experience.”

And lest we forget, the production of Encanto was significantly complicated by a pandemic that changed everything.

“Hundreds of people poured their own experiences into this story, and we all did it from our homes,” Bush observes. “The entire movie was produced at hundreds and hundreds of homes. And I will say there was something about us all being at home, surrounded by our families, telling the story about a family in their home that was weird. I never would've guessed that that's how this movie would happen, but I'm so proud of everyone's hard work, and I'm just really excited for them to see it and for their families to see it. And hopefully for families everywhere to connect to it.”