Taylor K. Shaw, CEO and founder of the visionary studio dedicated to providing opportunities for women of color, and Arts & Animation Director Buki Bodunrin talk about their contributions to the Black History Month series ‘Your Attention Please,’ now streaming on Hulu. 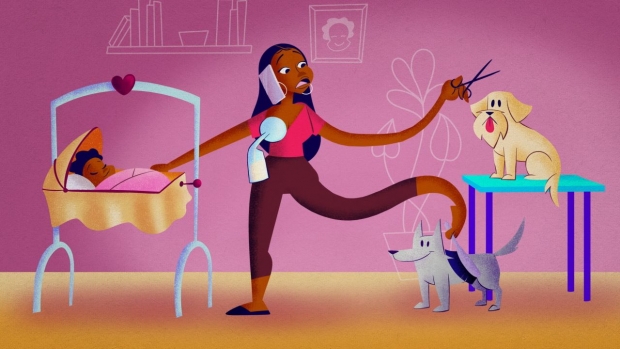 Since 2017, when she was working on an animated series and had trouble hiring a team of Black women animators for the project, Taylor K. Shaw has been passionate about opening doors for women of color. That year, in collaboration with Managing Partner JLove Calderón, she founded Black Women Animate, a production company dedicated to helping Black women, women of color, and nonbinary creatives of color attain greater representation in the animation industry, as well as enhance their ability to control their own narratives. Since then, BWA has partnered with Cartoon Network to offer a boot camp for the organization’s members and the extended community, and an annual Black in Animation Awards Show.

Most recently, BWA provided animation for two segments of Hulu’s Your Attention Please, a Black History Month series, hosted by Craig Robinson, that’s part of the streamer’s “Black Stories” hub. Your Attention Please showcases the lives, ideas, and purpose of a diverse group of Black innovators and creators who are leaving their mark on the world – including, in the first episode of Season 3, Ashley Ann and Dr. Maya Warren.

If only for the chance to do a story that brings together a celebrity dog groomer and an ice cream scientist (but obviously for other reasons as well), we spoke with Shaw and Arts & Animation Director Buki Bodunrin about BWA’s work on the series.

AWN: How did BWA become involved with Your Attention Please? Have you worked with them before?

Taylor K. Shaw: Hulu initially reached out to collaborate with us on Your Attention Please and, as fans of the show, it was an automatic, big yes! The first episode we did together last season honored eco-activist Maya Penn. We were happy to continue our working relationship and play a part in this season’s recognition of two more exceptional women. AWN: The 2D style and design of the two pieces look similar. Was the work on both done by the same people?

Buki Bodunrin: We had two different animators work on the respective pieces. For the dog groomer segment, because Ashley Ann has such a bubbly personality and an almost superhero-like origin story, we wanted to go with a clean style that could center her energetic storytelling – a Kim Possible-like aesthetic. We used hinged puppets and animated them in After Effects.

For the Dr. Maya Warren segments, we really wanted to capture the magic of eating ice cream. There’s a bit more exaggeration and texture to the design. We really focused on having these tantalizing moments of transition. When you eat ice cream, there is such a flavor journey that happens. We wanted the animation to have a similar feeling. To achieve this we used a mix of frame-by-frame animation and composited them in After Effects.

AWN: Were there any specific artists and/or films that influenced you and/or the animators?

BB: For Maya Warren, Sontenish Myers, the director for the episode, mentioned early on how she wanted the animated version of Dr. Warren to have Ms. Frizzle (Magic School Bus) energy. We took that idea and ran with it when we designed and storyboarded the piece.

Ashley Ann is a late 1990s/2000s kid. It’s a time period a lot of us working on the piece were familiar with, so we pulled a lot from that era. I’m also a big fan of indie comics and illustration, so these are always references for me, especially when thinking about framing and compositions.

Even though we are a virtual studio, we still have a pretty traditional production pipeline. We like to start with a completed script, and from there we move into concepts and design, which is where we decide on the animation style. Then we progress to storyboards and animatics, and finally animation. Of course, every project is different and these stages can shift and overlap. AWN: Were there any particular challenges in producing either piece?

BB: Animation transitions can be hard to describe and storyboard. There’s so much trial and error that happens while you’re animating to create a successful transition. It can be difficult to get clients to give you the OK when the storyboard frame looks chaotic –even when you know the movement ultimately will work. There were a lot of transitions in the Maya Warren piece, but thanks to our relationship with Hulu, they trusted us to make it happen.

AWN: What’s your favorite thing about the segments?

BB: It was a really fun challenge creating animated characters for each woman. Their stories are so special and inspirational. We spent hours combing their Instagrams, looking at interview footage, trying to find that perfect balance of superhero and relatable. We wanted them to be inspirational, but also relatable. These are dreams and goals any little Black girl can have.

And did I mention the dogs?? The dogs were a highlight for everyone. Even me, a cat lover.

AWN: What are some other notable projects BWA has worked on?

TKS: As a proud partner with Hulu, we recently delivered three episodes of animation for their “Monuments” campaign, devoted to Ruth Bader Ginsburg, Marjory Stoneman Douglas, and Coretta Scott King. We purposely selected each episode’s animation style to best illustrate the dynamism of each woman. We hope to continue making great work with Hulu! We also have exciting projects in the pipeline on the original content and commercial sides of our studio.

Taking an Old-School VFX Approach in ‘All Quiet on the Western Front’
‘Natural Habitat Shorts’: Like ‘Ranger Rick,’ But for Adults
Framestore Sets Sail on ‘1899’ with New Virtual Production Tools
Animated Characters: The Art of Babbitt – Part 1
Bruce Smith and Ralph Farquhar Talk ‘The Proud Family: Louder and Prouder’ Season 2
VFX is the ‘Thing’ for Tom Turnbull on Tim Burton’s ‘Wednesday’
We Need to Chat
F is for Flake: The (Not So) Great Animation Robbery?
END_OF_DOCUMENT_TOKEN_TO_BE_REPLACED