The third spot in a set of four developed by Rebecca Sugar and Ian Jones-Quartey each feature a different character from the hit series, providing kids and families productive ways to counter common narratives about racism. 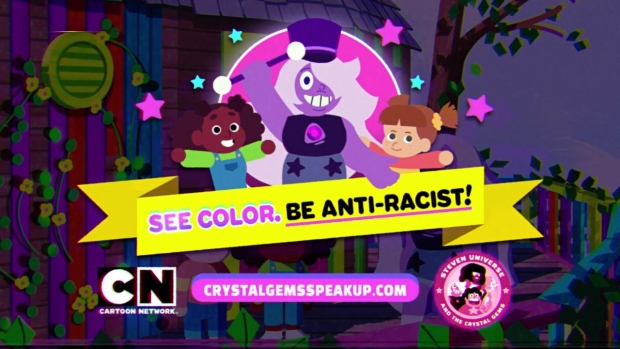 Cartoon Network has just released their third anti-racism PSA in a series of four developed by Emmy-nominated Steven Universe creator Rebecca Sugar, and Ian Jones-Quartey, creator of OK K.O.! Let’s Be Heroes. The spots are all aimed at providing kids and families with productive ways to disrupt common narratives about racism.

The series of anti-racism PSAs each feature a different Steven Universe character and discuss the importance of understanding how racism affects individuals, encouraging audiences to not be racist. The first PSA, Don’t Deny It, Defy It, featuring Garnet, was released in October; the second, Tell the Whole Story, with Pearl, premiered in December.

This new PSA, See Color, featuring Steven Universe’s Amethyst (voiced by Michaela Dietz), launched this morning on Cartoon Network’s YouTube channel and across the network’s social media platforms. The short shares the message, “It's important to SEE people in all their beautiful COLORS. When you see color and the unique experiences that come from it, you can recognize the role racism plays in our culture AND appreciate everyone and their diversity.”

Take a moment to watch the thought-provoking piece here:

See Color was developed in partnership with Dr. Deborah J. Johnson, with additional consulting from Dr. Kira H. Banks and Dr. Allen E. Lipscomb. Dr. Johnson is a developmental psychologist who received her doctoral degree in Human Development and Social Policy from Northwestern University. Her research explores racially and culturally related development, parental racial socialization and coping, and cultural adjustment from early childhood through emerging adulthood, in both domestic and global children and youth.

According to Dr. Johnson, “These PSAs offer a compact message of antiracism targeted toward messaging justice, fairness, inclusion and allyship based in research evidence.  The PSAs are bold, bringing the complex issues of society around race, gender, identity, and inclusion intensely into focus in a language and with images children can understand.  If we can capture children’s attention and early learning around these issues, our society has a chance to make and maintain shifts in equity for the long term.”

Viewers can log on to www.crystalgemsspeakup.com for links to the PSAs, as well as social justice organizations and additional tools and information.