‘The Cuphead Show!’ Celebrates the Golden Age of Animation 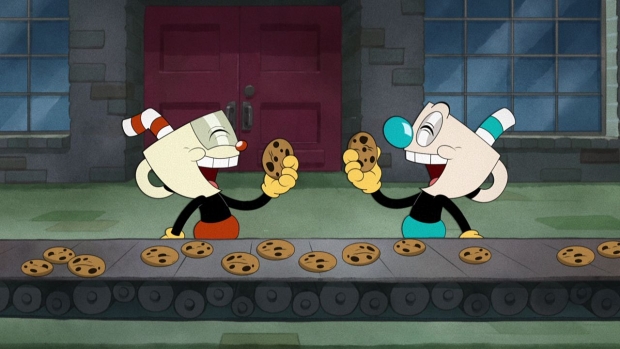 Question: What’s better than a video game inspired by the golden age of American animation, in which a couple of wacky characters based on beverage receptacles engage in a series of battles in order to settle their account with the Devil?

Answer: An animated comedy series based on the video game, in which the same two characters – the impulsive scamp Cuphead and his cautious, but easily swayed, brother Mugman – suffer a succession of unique misadventures as they traverse the surreal landscape of their home world, the Inkwell Isles.

Created by Chad and Jared Moldenhauer of Studio MDHR, the award-winning video game Cuphead channels the manic energy and surrealist style that characterized the work of Walt Disney Animation and Fleischer Studios in the 1930s. The Cuphead Show!, which the Moldenhauers also created and for which they serve as executive producers, successfully exploits the same beloved retro style, serving up “nostalgic delights, side-splitting gags, and a healthy dose of the heebie jeebies,” as the official press materials understatedly put it. The show premieres tomorrow, February 18, on Netflix.

It sounds like a natural, but as is well known by now, the road from video game to animated series can be a treacherous thoroughfare. What made them and their collaborators decide to go forward?

“I think Cuphead is such a great vehicle to make a series out of because it has incredible characters that you enjoy,” says developer/writer/executive producer Dave Wasson. “The game almost feels like something that's already based on a series. We always kind of joke that we were making the series that the game is based on, even though the game came first.”

Adds co-executive producer and writer Cosmo Segurson (who, with Wasson, also voices several characters in the show), “As opposed to other video game-to-cartoon scenarios, this game was already in a style that we were all on board with right away. The video game didn't really have a true story arc within it, the characters didn't talk, so we had to come up with all of that. But the video game had enough imagery and excitement that you sort of got the idea that there was a lot going on in the Inkwell Isles.” Moreover, as art director Andrea Fernández points out, because of the source, there would be no pressure to do the series in 3D, allowing them to remain true to the original aesthetic.

“It was awesome because they had to make it look 1930s,” she says. “No studio was going to push this into being a CG version of Cuphead. That just wouldn’t make any sense. In making other shows, like Sonic the Hedgehog, they went from this really cool flat 2D style to this highly rendered 3D. It’s awesome in its way, but here's also this big disconnect between the two. We were lucky because no one was pushing us in that direction. We were there to really make this feel like a 1930s cartoon.”

Finally, as Chad Moldenhauer observes, the possibilities are endless. “The Cuphead Show! follows the tale of the two brothers and all the kinds of trouble that they get into,” he says. “But there are threads in the stories that can take the series into the dark and crazy early Fleischer stuff. Other parts of the story can take it into the lighter Silly Symphonies territory that Disney explored back in the era. So it’s potentially a rollercoaster of different emotions, styles and themes that’s still all of one piece.”

In developing the series – which involved not only creating a narrative arc and giving the characters voices, but defining their personalities as well – the creative team drew largely on live-action movies and shorts from around the same historical period.

“Cosmo and I went through old films and talked about the things that we loved about them, different archetypes,” remembers Wasson. “The fast-talking wise guy definitely felt right for Cuphead. There were a lot of those guys with that rat-a-tat tat dialogue and New York accents. Then it’s like you're solving a puzzle – what pairs well with that? Mugman was influenced by Lou Costello of Abbott and Costello. So it was just kind of sifting through all our favorite stuff from that era and thinking what could fit, what would work for this character.”

“It was kind of tough finding voices for the characters,” says Jared Moldenhauer, “but we knew it should be very 1930s. So we leaned heavily on the newsreel vibe, that real gumshoe detective-y quality. We took that high-level concept and then found some voice actors who could do that. It is astonishing how that old-timey speak carries the energy from that era.” Perhaps the most extreme step the team took in the pursuit of verisimilitude, however, was to recreate the “Stereoscopic Rotary Process” used by the Fleischer Studio in some Popeye cartoons to combine stop-motion with 2D animation.

“I think we were the first people to have done it since the Fleischers did it in the 1930s,” Fernández shares. “They had this stereoscopic process where they would create little live-action sets and then they would have 2D animation on top of those sets. If you see a Popeye cartoon and, all of a sudden, it looks like he's going through an actual set, that's the stereoscopic process. It switches from a 2D background to an actual set. Replicating the process for this show was a very tricky thing to figure out. I'm surprised we could even technically pull off some of the shots.”

But once they figured out how to do it, was it easy to integrate the technique into the production process, or was it still difficult?

Fernández: “It was difficult.”

“It was difficult,” Fernández explains, “because we had a regular 2D pipeline for this show. Apart from there being a stop-motion studio waiting for this artwork to come through, we had the same 2D pipeline that any other TV show has. So we had to figure out a way to produce this stuff at the same time we were producing the 2D aspects of the show, which required a lot of problem solving by the team.”

“We knew nobody had done this for a really long time,” Wasson continues. “And we had to figure things out like, how do you keep the characters from slipping on the background, how do you make sure they're walking at the same rate that the background is panning? We talked to the 3D [stop-motion] studio, Screen Novelties, but they hadn't done a lot of 2D and 3D integration. So we came up with a process where we animated the character first, walking at the speed that we needed, and then we added a computer-generated grid that we would give to Screen Novelties, and then they would pan it based on the speed of the grid.” OK, but was it worth it?

“It’s so eye-catching and kind of like just amazing,” Wasson affirms. “There's nothing else really like it.”

“Whenever those sequences appear on screen, I feel like it invites the audience to really take a look and be more involved,” seconds Segurson. “Like you want to look around those sets. So we decided to use those for moments of heightened emotion, and for establishing shots that were important to us. We tried to be very selective.”

Another technique borrowed from the 1930s, implemented partly through necessity and partly as a creative stimulus, was to give the board artists more freedom to work out the action and even add new material.

“It's a lot of work to get physical comedy to work in a TV pipeline, because physical comedy requires so many poses to really nail down, and there aren't that many people that really do that stuff so much anymore,” says Wasson. “Fortunately, we had some really good board artists that also could kind of animate. So we would really pose these animatics out and time the hell out of them, and then go to a studio.”

“We would do these really elaborate outlines, but the board teams could add their own visual gags and stuff,” Segurson adds. “We wanted to use the technique that they used back then, where it's like they weren't scripted, they were outline driven. So even though we figured out a good portion of the dialogue, a lot of the action really grew into what it was through the boarding process.” Finally, asked what the biggest, most daunting challenge they faced was, the creative team was unanimous in their response; apparently, resurrecting an animation technique that hadn’t been used in almost a century was nothing compared to having to deal with the fallout from a global epidemic.

“COVID was definitely the most difficult challenge,” says Fernández. “We were at a brand-new studio, trying to make a show like it was in the 1930s, and then we were in the midst of a pandemic. It sometimes felt like, sure, why not just throw something else at us?”

“It’s true,” laughs Wasson. “We felt like we had a curse on us for a while. Because, as Andrea said, we were working at a studio that was embracing animation for the first time, so there wasn't a lot of infrastructure in place. We didn't even have a permanent location for a while, we kind of bounced around from building to building.”

“Ultimately, I think it was good for us,” Fernández concludes. “There were good and bad things about it, but ultimately our project benefited from having to deal with all of these hurdles. I'm just super grateful that so many people were so into the project, and we all worked so hard towards making something good that ultimately we were able to overcome all this stuff. But it was not a smooth ride, I'll say that.”

A Raptor for All Seasons: The Creation of ‘Peacemaker’s Eagly
SCAD Alumni Talk Animation Skills, Careers, and Opportunities
Digital Domain Pushes the Limits of Monstrous VFX in ‘Morbius’
An Interview with Priit Pärn
‘Baymax!’ Provides an Rx for Humor and Compassion
How Digital Domain Brought Photoreal Characters to Life in ‘The Quarry’
Mission Critical: ‘Lightyear’s Journey to Infinity and Beyond
‘The Freak Brothers’: This is Your Humor on Drugs
END_OF_DOCUMENT_TOKEN_TO_BE_REPLACED