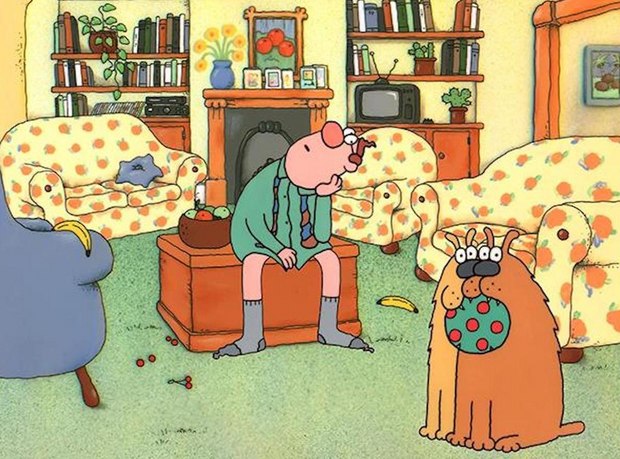 There has been no shortage of collaborative couples in animation. Frank and Carolyn Mouris, Sayoko and Renzo Kinoshita, Joanna Quinn and Les Mills, Priit and Olga Pärn, me and my imaginary friends, Wendy Tilby and Amanda Forbis.  One of the most sustained and successful is undoubtedly the duo of David Fine and Alison Snowden. Since hooking up while studying at the National Film and Television School (NFTS), they’ve created the wonderful short films, Second Class Mail (1984), George and Rosemary (1987), Bob’s Birthday (1993) along with a successful TV series, Bob and Margaret.

Their work together, not entirely surprisingly, often deals with the challenges, desires, and quirks of love, desire and partnership. What makes their work unique is their focus on the forgotten or ignored generations. Both Second Class Mail and George and Rosemary deal with the loneliness and passions of the elderly, a generation that is usually forgotten, ignored or pushed aside. With humour and grace, Snowden and Fine give a voice to those forgotten, reminding us that they still live, breath, eat, shit and love like the rest of us.

George and Rosemary , David Fine & Alison Snowden, provided by the National Film Board of Canada

Bob’s Birthday (and the series it inspired, Bob and Margaret) shifts the focus to a married couple in their thirties. On the surface it’s about a surprise birthday gone awry, but underneath this is a portrait of a couple struggling with the routines of domesticity, growing older and their own private, conflicting desires.  Unlike broader family comedies (i.e. The Simpsons, Family Guy) Fine and Snowden treat their protagonists with a genuine kindness, humour, and forgiveness. They humanize and dissect the genuine pains, contradictions and absurdities of daily living without the escapist safety net of sarcasm. That’s kinda beautiful.