Pictures from the Brainbox: A Weekly Dose of Indie Animation - 'Chez Moi'

Every Tuesday, Chris Robinson digests and dissects (relatively) new indie animation short films. This week Chez Moi (2015) reminds us that having or being a stepparent is no picnic. 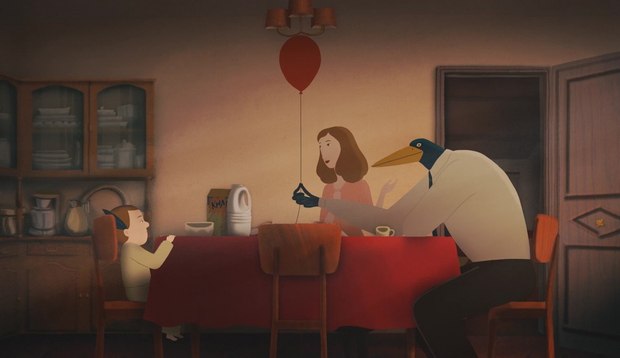 I love the quiet, tense, and strange discomfort of Phuong Mai Nguyen’s Chez Moi (My Home, 2014). In fact, I know it all quite well. I’ve been on both sides of the stepparent predicament. It ain’t easy.

My experience was a bit different. I lived with my grandparents and mother as a young child. It was in the country. It was light and open and free. Then it changed. My mother and I moved to a small apartment in the city. It was loud, cramped and dark. And then a man appeared. He didn’t introduce himself. He wasn’t introduced. He was just there. As the years passed I just called him ‘dad’ cause, well, why not? I never liked him. He was a bully. He scared me.

It all changed when I hit 15. He pulled me aside one day and told me that in fact he wasn’t my father (that one had fled before I was born).

I could barely contain my joy.

Then, a few years ago, I became a stepfather to a child whose father was rarely in the picture. It was a bit strange for us both at first, but my stepson and I get along quite well actually. Sure there are some tough periods. That’s pretty natural when the genetics are different, but I think we’ve learned a lot from each other. He’s even – unconsciously - helped me be a better father to my biological sons. Maybe it helps that we share a bond of both having been abandoned, ignored, failed or whatever by our biological fathers. I dunno.

The experience has also given me more respect for my ex-stepfather (he and my mother eventually divorced). I still think he’s a prick, but unlike my ‘real’ father, he at least showed up. He failed a lot, but so what… he TRIED. It’s a lot fucking harder to try, fail, and then try again and again, even if all you manage to do is fail better.  To fail better is a whole lot more courageous than to not even try.

Chez moi / My Home from Papy3D Productions on Vimeo.