Uninhibited by the new digital format for its 2020 edition, the Annecy Festival continues to showcase world-class animation in its official shorts competition. 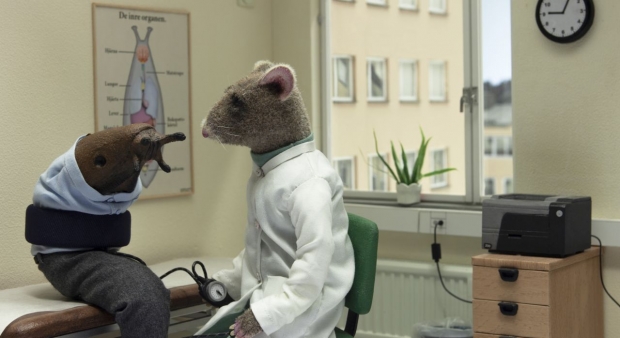 With the COVID-19 pandemic forcing the postponement or cancelation of film festivals worldwide, this year’s Annecy Festival was luckier than most; quickly pivoting to an online edition, festival organizers put together an extensive and impressive set of livestreamed and on-demand sessions, presentations, and film programs. And while nothing can replace the energizing warmth of a packed, raucous animation screening, Annecy Online 2020’s VOD film programs, which launch June 15, will at least showcase great work to an international audience eager to see animation they might not otherwise access for quite some time, if at all.

Here are a few highlights from the Official Short Film Competition; you can find more information on these and other shorts in competition by clicking here; the festival’s entire selection of films can be found by clicking here. Comprising five real stories told using five different animation techniques, Carne (Flesh) explores various women’s relationships with their bodies and the societal objectification that comes with the territory. What does it mean to be a woman? What does it mean to be treated like meat? Camila Kater’s eloquent debut is split into stages of doneness—rare, medium rare, medium, medium well, and well done—and travels through the phases of a woman’s life, examining childhood, menstruation, and menopause, among others. A young girl discusses others’ treatment of and opinions on her weight while a black trans woman in her sexual prime deals with men’s often aggressive and lustful reactions toward her body. Beautifully animated, Carne uses clay animation, stop-motion, and edited black-and-white film footage to illuminate crucial points of view. Eerily appropriate for the current era, Empty Places depicts just that—empty places. Geoffroy de Crécy’s looping 3D animations imagine escalators disrupting rolling soda cans instead of transporting humans, skier-less ski lifts, and sushi-go-rounds proffering sushi to no one. The lack of living characters should feel ominous, but instead the loops are oddly therapeutic. De Crécy’s background in video games and advertising, as well as a keen interest in ’80s graphics, serve as the basis for his visual style, while a distaste for hyper-realistic character design inspires the lack of people. Though the thought of empty malls and office buildings may feel a little on the nose vis-à-vis the ongoing pandemic, Empty Places exudes a sense of serenity that’s sure to calm even in these trying times.

Friend of a Friend, Zachary Zezima

The dizzyingly colorful Friend of a Friend will have its world premiere at Annecy. The 14-minute film, which took close to three years to complete, is a unique exploration on the complex topic of sexual assault. LA-based filmmaker Zachary Zezima took on the tricky subject after an assault within his own friend group, and the animation process was emotionally trying for him. The resulting story is an intense and original exploration of trauma and the dynamic between survivors and assailants—in an unusual twist, the main character eventually befriends his attacker. The digital 2D cinemascope animation, done in TVPaint and After Effects in both Los Angeles and France, is fluid, fast-paced, and deeply expressive.

FRIEND OF A FRIEND - TRAILER from Sacrebleu Productions on Vimeo. Genius Loci, a French short by Adrien Mérigeau, has been cleaning up at festivals. Just this year, it has already won the Audi Award at Berlinale and snagged the Grand Prix at GLAS, among others. A hint of Mérigeau’s past at Cartoon Saloon is visible in the texturing of the mixed media production—he worked as a background designer on The Secret of Kells and served as art director for Song of the Sea. He’s clearly no stranger to success. His 2009 short Old Fangs, produced by Cartoon Saloon, was selected for Annecy’s official competition in 2010 and won best in show at Animation Block Party the same year. In Genius Loci, produced by Kazak Productions, Mérigeau brings the same finesse and gorgeous precision of his other projects to the story of Reine, a young woman chasing the chaos of the city.

Directed by Alberto Vázquez Rico and co-produced by Autour de Minuit and Uniko, Homeless Home is a darkly mesmerizing digital 2D animated short. Over the course of his career, Vázquez has developed an easily recognizable style—both narrative and visual—and seems to prefer dealing with shadowy subjects such as addiction and sin with an ironic voice. The illustrator, director, and cartoonist has helmed projects such as short Decorado and the 2015 feature Birdboy: The Forgotten Children, which was based on his own graphic novel. “Homeless Home,” which will have its premiere at Annecy, explores notions of home and homecoming, and declares, “No one can escape their roots, however rotten they may be.” Kosmonaut will be Kaspar Jancis’ fifth short appearing in Annecy’s official competition lineup. Eight years after the premiere of Villa Antropoff, the co-director of Captain Morten and the Spider Queen returns to shorts to tell the story of an old cosmonaut, stuck in his ways, living in the past, and increasingly removed from societal norms. A whimsical digital 2D style helps illustrate the absurdity of the intergenerational dynamic between the cosmonaut and his grandson as the audience learns whether or not the old man will ever be able to let go. Machini, which has already appeared at both DOK Leipzig and the International Film Festival Rotterdam, is the impressive film debut of directors Frank Mukunday and Tétshim. A co-production between the Democratic Republic of the Congo and Belgium, the short is the only nominee in this year’s official competition to hail from Africa. The stop-motion film highlights the conditions of workers who process cobalt and lithium, two key constituents of electric batteries—that is to say, clean energy. When the main characters of Machini begin to suffer as a result of the noxious fumes produced by the factories they work in, the audience is forced to come to terms with the fact that a world-saving technology for the greater good depends on the exploitation of a few. Winner of the Cristal in 2017 for musical hit The Burden, Niki Lindroth von Bahr returns to Annecy with Någott att minnas (Something to Remember). By now, her uncanny animal puppets and sets meticulously crafted to resemble our own world are nigh iconic. Gloomy but charming, Something to Remember captures six scenes that take place right before disaster. Two pigeons visit a zoo lacking in attractions while a snail gets his blood pressure taken at a doctor’s office. What they don’t know is that in a nearby CERN laboratory, something has gone horribly wrong—von Bahr seems reluctant to abandon her flair for the apocalyptic. And why should she? It’s worked out brilliantly for her so far.