With a 2020 Daytime Emmy nomination in tow, as well as two GLAAD Media Award nominations, the hit Nickelodeon show celebrates diverse characters, realistic storylines, and a centennial milestone as it heads into Season 5. 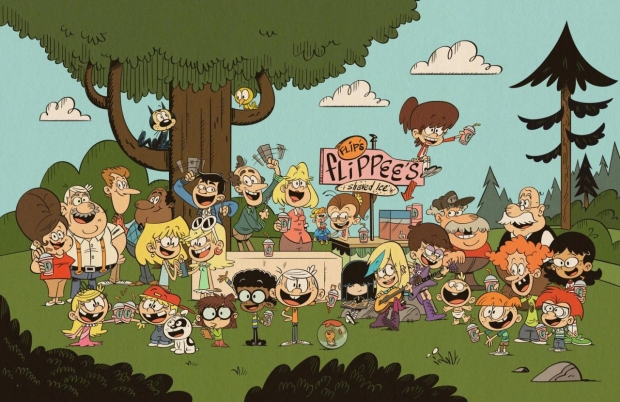 One boy, ten girls. As if growing up wasn’t enough of a challenge, Lincoln Loud must navigate school and relationships while mashed in the middle of a slew of bossy, musical, comedic, and gloomy sisters. Starring Asher Bishop as Lincoln, The Loud House has set itself apart in kids animation, receiving nominations at both the 28th and the 29th GLAAD Media Awards for introducing Nickelodeon’s first same-sex married couple, the two fathers of Lincoln’s best friend Clyde. The show also just received a 2020 Daytime Emmy nomination for Outstanding Children’s Animated Series. And, in May 2017, Lincoln and Clyde were featured on the cover of Variety as an example of diverse characters in children's television.

Now, the series is marking another milestone as it celebrates its 100th episode.

Executive producer Mike Rubiner has been part of The Loud House crew since its earliest days, first as a story editor and writer, eventually becoming EP in 2017. He’s worked on a slew of animated TV series dating back to Welcome Freshman almost 30 years ago; he’s also worked on similar boyhood, coming-of-age cartoons, such as The Walt Disney Company’s Boyster, which follows the everyday adventures of a 12-year-old boy who has to keep his identity as a half-oyster-half-boy a secret from his elementary classmates. We recently spoke with Rubiner about his personal connection to The Loud House, favorite musical specials, the show’s unique approach to tackling teen troubles, and what to look forward to in the fifth season. Victoria Davis: How did you first get involved with The Loud House? What attracted you to this coming-of-age comedy?

Mike Rubiner: I had recently moved to LA from New York and heard from friends at Nickelodeon about The Loud House starting up. It sounded like the perfect show for me – I have three sisters, which isn’t ten, but it’s something. And, as it happens, I’m from the same area that the show is loosely set in – suburban Detroit. So, it definitely seemed like it was meant to be.

VD: Speaking of commonalities, you've worked on a lot of other animation shows that focus on young boys and how they navigate through life, like Boyster, Dude That's My Ghost, and Robot Boy. Is that an animation genre you particularly enjoy working on? MR: I do enjoy it. I was lucky enough to have a great childhood, and that time of my life still has a special, mythical quality to me. It’s fun to relive those memories and bring them to bear on making the show. That said, the appeal of working on The Loud House is about way more than just Lincoln – it’s about all the sisters, the parents and the ever-expanding cast of characters in Royal Woods.

VD: Is that large cast of characters something that makes The Loud House unique from other shows you've worked on?

MR: That’s one of the differences – the 13 members of the Loud family, not to mention all the other characters we’ve added to the mix over the years. But that has been more of an opportunity than a burden. It gives us so many places to go, story-wise. I think it’s part of the reason we’ve been able to keep the show going for so long – and hopefully, we’ve got a ways to go!

VD: You’ve worn many hats on this show. Tell me about your work not only as the executive producer, but also story editor and writer.

MR: I was story editor for the first couple of years, so I spent my days in the writer’s room, helping to shape the stories and hone the scripts. The process of writing the show is closer to a live-action sitcom than your typical animated kids show – it mostly happens in the writer’s room and is very collaborative.

I became the executive producer in 2017, so now I’m involved in every step of the process, from storyboarding, to voiceover records, to animation, to music. I’m extremely lucky to have a very talented team that does most of the hard work; I just try to be the quality control person, making sure everything is as good as we can make it.

VD: Having spent so much time on the scripts and now in “quality control” as you say, what were some of your favorite episodes to work on?

MR: Well, there have been a lot, but working on the two-part musical “Really Loud Music” was especially fun and challenging. It was different than any other episode we’d ever done. The artists on the show got to take their game to a new level, and we worked with two incredibly talented songwriters, Michelle Lewis and Doug Rockwell. It was a ton of work, but we were all very proud of it. VD: And now you’ve hit your 100th episode! Congratulations on reaching that milestone. What can you tell us about the episode?

MR: We didn’t really do anything special for this episode. We tend to reserve that for our two-part specials, like “Really Loud Music.” But we do have something quite special coming up a few episodes later, which is the beginning of the fifth season. We’re moving ahead in time a year, which means Lincoln will start middle school, Lily will start pre-school and Lori will be off to college. We’re excited about the story possibilities that will give us.

VD: The Loud House, in addition to its GLAAD Media Award nominations, has gotten a lot of great feedback from viewers who say the show is very down-to-earth in the way it handles teenage kid situations. What do you think sets its apart as an animated kids show?

MR: I think just what you mention in your question is a big part of it. We try to ground the show in the real lives of kids as much as possible. We try to tell stories that kids can relate to and see themselves in. And in addition to trying to make kids laugh, we also hope that in some small way we can give them positive messages about family and love and growing up…without hitting them over the head with it, hopefully. VD: What about the show’s future are you most looking forward to?

MR: We’ve been working on an animated feature-length movie for Netflix. And we’re also working on a live-action The Loud House movie. I’m super excited about both of those projects. It’s a really fun challenge to tell bigger, longer, more epic stories about this family we’ve all grown to love.