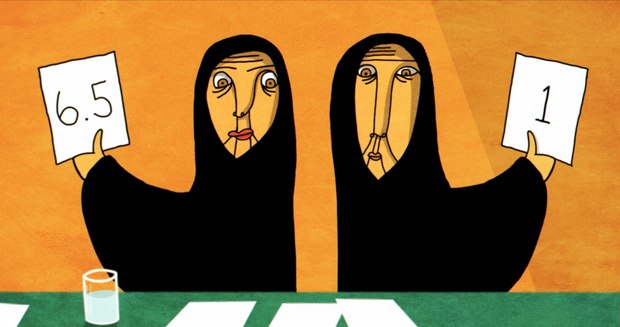 Co-produced by the National Film Board of Canada alongside Fleming’s Stick Girl Productions and producer and voice talent Sandra Oh, Window Horses centers on Rosie Ming, a young Canadian poet living with her overbearing incredibly supportive Chinese grandparents who gets invited to perform at a poetry festival in Iran. Rosie travels to Iran where she finds herself in the company of poets and Persians who tell her stories that make her confront her past: The Iranian father she assumed abandoned her, and the nature of poetry itself.

In “Rosie’s Poem,” Rosie takes the audience on a visual musical journey through a poem about her struggle to become a writer. Check it out in the player below:

Window Horses is filled with poetry and stories. While the narrative of the film is presented in one particular style, the poems and histories are created by different artists, to both accentuate and blend the myriad differences in cultures, philosophies, time frames and poetry. More than a dozen animators, including Kevin Langdale, Janet Perlman, Bahram Javaheri and Jody Kramer, worked on the film with Fleming.

Based upon Fleming’s graphic novel of the same name, Window Horses has been qualified to receive a nomination for Best Animated Feature at the upcoming Academy Awards. The 2D-animated movie encompassing a range of visual styles was partially funded by a successful crowdfunding campaign on Indiegogo, which raised $80,000 dollars from 730 backers from 28 different countries. It premiered at the Annecy International Animation Film Festival in 2016, and was an official selection at both the Toronto International Film Festival and the Ottawa International Animation Festival.