Canadian independent animation director details the making of her award-winning feature telling the story of a naïve young woman of mixed descent who travels abroad to a poetry festival in Iran. 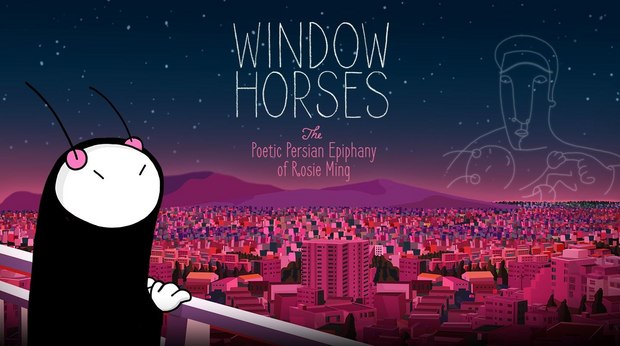 Window Horses, the prescient feature from Ann Marie Fleming, tells the story of Rosie Ming, a naïve young woman of mixed descent who travels abroad, for the first time, to a poetry festival in Iran. Through this initially awkward experience, Rosie discovers the world, her family and herself. Window Horses is a touching and timely tale that traces the pain, confusion and wonder of multiculturalism, immigration, cultural stereotypes and identity.

Given the political and social leanings of the world today, with it slant tendency towards an intolerant and xenophobic nationalism, Window Horses is an especially timely and hopeful film that celebrates diversity and the importance of sharing stories. It’s also a nice nod to the often understated impact that cultural events have in bringing together people with shared interests but different cultural backgrounds.

Distributed in North America by First Pond Entertainment, Window Horses: The Poetic Persian Epiphany of Rosie Ming is currently showing at the Laemmle Music Hall in Los Angeles through October 5. The film was an official selection at Annecy 2016, as well as the Toronto International Film Festival and the Ottawa International Animation Festival, winning awards for best feature at this year’s Stuttgart Festival and for achievement in music at the 2017 Canadian Screen Awards. Written and directed by Fleming, and executive produced by Sandra Oh, Window Horses was produced by Fleming under her Stick Girl Productions banner alongside National Film Board of Canada producers Shirley Vercruysse and Michael Fukushima. Oh leads the voice cast as Rosie Ming, which is rounded out by a host of talent including Ellen Page as Rosie’s BFF Kelly.

Fleming has been making films since the 1980s. A graduate of Vancouver’s Emily Carr Institute of Art and Design, Fleming’s films (e.g. You Take Care Now, AMF’s Tiresias, The Magical Life of Long Tack Sam) have frequently dealt with issues of family and identity, along with an array of difficult social issues (rape, domestic abuse, the Holocaust). AWN recently sat down with Fleming to learn more about how Window Horses was made, including the origins of the film, visual development, and sound design. Read the full Q&A below: You’re of mixed heritage and your previous feature (The Magical Life of Long Tack Sam) also dealt with multicultural issues. Was Window Horses also taken from your own experiences?

I’m Chinese on my mother’s side, Australian on my father’s side, born in Japan with a Korean birth certificate and a Canadian citizen. That hybridity definitely informs my work and my curiosity about other people’s invisible histories and the world in general.

What are the origins of this particular story?

The idea started about 20 years ago, when I was in an artists’ residency in Stuttgart and listening to many stories of diaspora -- particularly after the second world war -- and how the generations in families often didn’t pass on their stories. I took a close friend of mine’s difficult relationship with his father as a starting point. I was also struggling to live outside of my own culture and language and became fascinated with the idea of translation and adaptation

Why Iran? Why a poetry festival?

I was also introduced to the poetry of Rumi while in Germany, and Iranian cinema oddly, but this film did not take place in Iran until I returned to Vancouver many years later and became aware of the stories of the Iranian diaspora (there is a very large Persian community in Vancouver). Iran and China are both ancient cultures where the poetry of a millennia ago is still very much alive. Human beings are talking to each other across history in a constantly evolving conversation. I find that idea very powerful. It connects us not just across cultures but across time. Rosie’s painful awkwardness, insecurity and, I guess we can call it, culture shock, upon arriving at the poetry festival reminded me a lot of my first travels to international animation festivals.

Yes, the poetry festival is perhaps the most autobiographical part of the film. It really stands in for the film festivals I’ve travelled and presented my works in. International festivals are these beautiful oases where people of all different backgrounds and languages and cultures get together to talk about art, our different experiences and viewpoints and about how we get along in the world. You always learn something that shakes up your world view, if you are open to it.

How did actress Sandra Oh become part of the project?

I called up Sandra -- she’s an old friend -- to ask if she would be the voice of Rosie Ming. She loved the story so much she wanted to become more involved and was the spokesperson for our campaign, basically, and ultimately became an executive producer.

You’re an old pro in film, but how does it feel directing people? It’s one thing to manipulate animation characters, but quite another to have to direct professional actors.

I’ve worked a lot in live action, as well as animation, and I love working with actors. I think of animated characters as having two types of actors bring them to life: real time voice talent and much slower animators. together, they create the characters.

My greatest pleasure as a writer was the attention paid to the text. Everyone truly understood what we were trying to make here, and often related to their characters in ways that were surprisingly personal. What influenced the design of the film?

The idea was to have a continuous line drawing in a negative space that got more complex visually as Rosie’s world expands.. I was also inspired by the Japanese prints of the Edo period that, like Persian miniatures, borrow so much from the style of China’s Tang Dynasty. I wanted to reference not just the style, but also a time when cultures borrowed and blended and spoke to each other.

What motivated you to invite other animators (Lillian Chan, Shira Avni, Louise Johnson, Jody Kramer) to take on segments in the film.

This film is from Rosie’s point of view and the styles represent her growth and change but also they show us the power of the artistic process, and the endless possibilities there are to express an idea. Can you talk about the music and sound design for the film?

I was always taught that sound was 60 percent of an animated film. In Window Horses, in particular, oral poetry is such an essential part of the story…the sound of the human voice, the sound of longing, the sound of music, the sound of everything! I started listening and collecting Iranian music 20 years ago, when I first started thinking about this film (even though it wasn’t set in Iran yet!)

I’ve been working with Gordon Durity (the sound designer) for a long time… we are childhood friends… and we decided on a very diegetic approach to the soundtrack. like the visuals, except when we go in to the worlds of poetry and history, you only see and hear what is essential to the story. I always had this idea of the Azan (call to prayer) being a reoccurring motif. Taymaz Saba, our composer, was instrumental in helping us create the soundscapes for shiraz. I start thinking about music usually hand in hand with story and visuals and Taymaz came on to the project early in production. It is a mixture of East and West both sonically and instrumentally, mixing original music with traditional adaptations.

What was the most challenging part of this process?

This was my first long form animated project. A lot was new for me on this project, so a big learning curve from financing options, dealing with guilds and lawyers, working with a larger team. An animated feature is a long process with so many different moving parts. Just keeping the faith and keeping everyone motivated and engaged and moving in the same direction. The art part is always the fun bit.