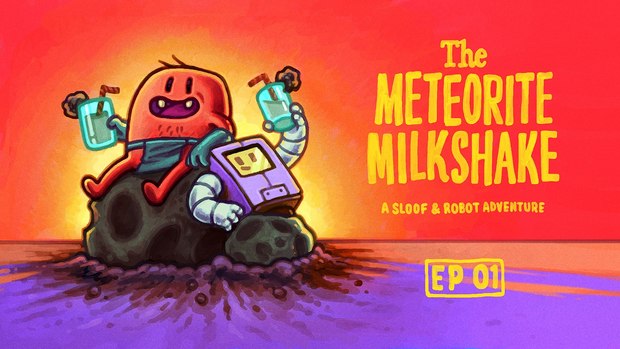 Sloof is a big red fuzzy swizzard -- which is way more fun to say than wizard-scientist -- who runs a shop with his trusty Swiss-army robot assistant, Robot. Together they sell everything from love potions to shrink rays to doomsday machines. But upstairs, in Sloof’s wondrous workshop, unbelievable adventures await as the two concoct new things to sell that defy imagination.

Each episode contains two or three stories of varying length, with no particular narrative arc connecting them, making them perfectly snackable. Sloof’s Supershop aims for meandering fun without any sappy mushy stuff getting in the way. Any character who explodes at the end of one episode is always back for the next, and sometimes the bad guy wins. That’s life.

Check out the first episode, “The Meteorite Milkshake,” in the player below:

For more wacky goodness, watch the first episode of Professor Soap, below, and head over to Mauskopf’s Vimeo channel for more:

An illustrator, animator, graphic designer and musician based in NYC, Mauskopf has worked for The Onion, Atlantic Records, CollegeHumor, Clickhole, IFC, ABC and Disney. He’s currently the art director at BustedTees and TeePublic, and, yes, his last name really does mean “Mouse Head” in German.