Watch special clips and NYCC X Metaverse cast and crew panel presentation; the 10-episode third and final season of the studio’s whimsical animated series tells the story of a young girl thrust into an adventure on the surface of a fantastical post-apocalyptic Earth. 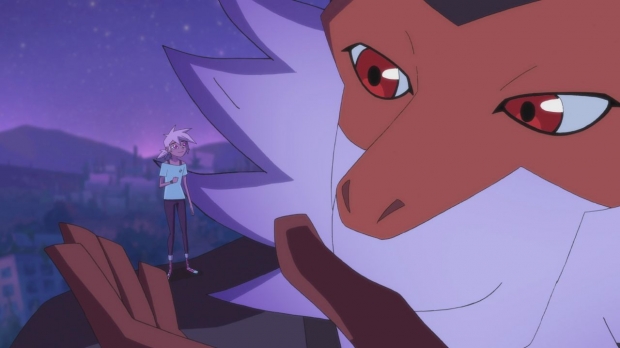 DreamWorks Animation’s whimsical and action-packed 2D animated series, Kipo and The Age of Wonderbeasts, returns today for its third and final season. To support today’s 10-episode Season 3 release, Netflix has shared five clips, including K-Pop singing narwhals, the Human Mute Ultimate Friendship Alliance and others, which are posted below along with the Season 3 trailer.

After spending her entire life living in an underground burrow, a young girl named Kipo (Karen Fukuhara) is thrust into an adventure on the surface of a fantastical post-apocalyptic Earth. She joins a ragtag group of survivors as they embark on a journey through a vibrant wonderland where everything trying to kill them is downright adorable.

In the show’s inaugural season, Kipo saw herself as an ordinary kid, trying to get back to her father and the people of her burrow, hoping she could be safe and ordinary again. Following on the events of Season 1, we learned all was not well on the surface. With the burrow people under evil villain Scarlemagne’s mind control and her father his prisoner, Kipo had to quickly master her newly discovered mute abilities in order to save them. As she and her friends split up on a dangerous rescue mission, Kipo unearthed mysteries of the past that changed everything she thought she knew.

In the new season, after dethroning Scarlemagne, Kipo and the Brunch Bunch face a more daunting foe: Dr. Emilia, who plots to eliminate mutekind to make the surface “safe” for humans. But Kipo has an optimistic vision of a world where mutes and humans get along with each other. To achieve that dream, she must lean on her friends and rise to a role she may not be ready for.

First H.M.U.F.A. Meeting: Welcome to the first HMUFA meeting! Kipo is determined to prove that joining the Human Mute Ultimate Friendship Alliance is the best decision for everyone, but will the rest of the village be on board?

Ocean of Love: Meet Hyun-Soo & the Narhartz, a group of musical narwhals!

Meeting Margot: Wolf’s childhood best friend, Margot, shows up to ask for help. But will Wolf be able to put their past to the side?

Squishing Bugs: Can you keep up with the shenanigans of Dave and Benson?!

The cast features Karen Fukuhara (She-Ra and the Princesses of Power) as “Kipo;” Sydney Mikayla (School of Rock) as “Wolf;” Coy Stewart (Agents of S.H.I.E.L.D.) as “Benson;” Deon Cole (black-ish) as “Dave;” a talking insect; and Dee Bradley Baker (Star Wars: The Clone Wars) as the adorable mutant pig “Mandu”. Sterling K. Brown (This Is Us) returns as Kipo’s father “Lio Oak;” Dan Stevens (Downton Abbey) as the power-hungry “Scarlemagne;” Jake Green (The Boss Baby: Back in Business) as mod frog “Jamack;” and Amy Landecker (Transparent) returns as the vengeful “Dr. Emilia.”