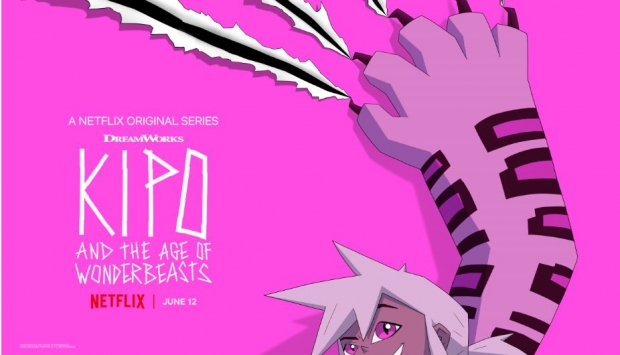 Season 2 of DreamWorks Kipo and The Age of Wonderbeasts will debut on Netflix June 12, providing fans of the show with 10 more animated adventures set in the weirdly whimsical post-apocalyptic world of Las Vistas. A 10-episode Season 1 previously launched on the streaming giant this past January 14.

The show has the distinction of being the first post-apocalyptic fantasy in which the bad guys are as winsome as they are dangerous. Kipo, the eponymous heroine (voiced by Karen Fukuhara), who’s spent her entire life living in an underground burrow, suddenly finds herself in a struggle for survival against the giant (but cute!) animals who rule the surface world. With its striking angular design, diverse cast of characters, and innovative integration of music into the narrative, Kipo and the Age of Wonderbeasts is both a new spin on the hero(ine)’s journey and a weirdly whimsical imagining of life in a ravaged world.

Following the season one finale, all is not well on the surface. With the burrow people under Scarlemagne’s mind control and her father his prisoner, Kipo must quickly learn to master her newly discovered mute abilities in order to save them. As she and her friends split up on a dangerous rescue mission, Kipo’s journey of self-discovery unearths mysteries of the past that change everything she thought she knew.

Read AWN’s interview with executive producers Radford Sechrist and Bill Wolkoff:
‘Kipo and the Age of Wonderbeasts’ Shows the Bright Side of a Post-Apocalyptic World Season 1 of DreamWorks Animation’s ‘Kipo and the Age of Wonderbeasts’ debuted worldwide on Netflix January 14, 2020.

The cast features Karen Fukuhara (She-Ra and the Princesses of Power) as the enthusiastic and curious Kipo; Sydney Mikayla General Hospital) as Wolf, a weapon-wielding survivor who knows the ins and outs of the surface; Coy Stewart The Blacklist) as the happy-go-lucky Benson; Deon Cole (black-ish) as Dave, a talking insect who has the jarring ability to suddenly age a full life cycle without warning; and Dee Bradley Baker (Star Wars: The Clone Wars) as the adorable mutant pig Mandu. Sterling K. Brown (Frozen 2) returns as Kipo’s father Lio Oak; Dan Stevens (Legion) as the power-hungry Scarlemagne; Jake Green (The Boss Baby: Back in Business) as mod frog Jamack; and Lea DeLaria (Orange is the New Black) as Timbercat Molly Yarnchopper. Amy Landecker (Transparent) joins as the mysterious Dr. Emilia.

All 10 half-hour episodes of the second season of DreamWorks Kipo and the Age of Wonderbeasts premiere worldwide June 12, 2020 on Netflix.