Radford Sechrist and Bill Wolkoff discuss their unconventional new DreamWorks Animation series about an intrepid heroine going up against a bunch of deadly, but adorable, giant animals, premiering today on Netflix. 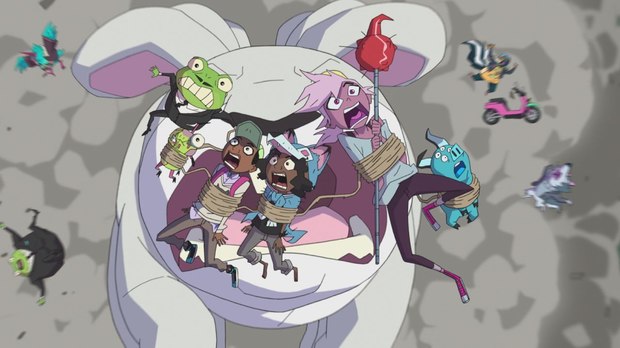 Debuting today on Netflix, DreamWorks Animation’s Kipo and the Age of Wonderbeasts has the distinction of being the first post-apocalyptic fantasy in which the bad guys are as winsome as they are dangerous. Kipo, the eponymous heroine (voiced by Karen Fukuhara), who’s spent her entire life living in an underground burrow, suddenly finds herself in a struggle for survival against the giant (but cute!) animals who rule the surface world. With its striking angular design, diverse cast of characters, and innovative musical interpolations, Kipo and the Age of Wonderbeasts is both a new spin on the hero(ine)’s journey and a weirdly whimsical imagining of life in a ravaged world.

To learn more about how this oxymoronic series came to be, we spoke with executive producer/creator Radford Sechrist (How to Train Your Dragon 2, Penguins of Madagascar) and executive producer/developer Bill Wolkoff (Once Upon a Time, TRON: Uprising). As Sechrist explained, it all began about five or six years ago…

“I was working [as a story artist] on How to Train Your Dragon 2 and trying to think of a new comic project to write and draw. I was inspired by shows like The Walking Dead and Game of Thrones and wanted to do a dark epic post-apocalyptic tale.” Thus, Kipo was born, debuting as a webcomic in early 2015, and almost immediately being optioned by DreamWorks Animation. Shortly afterwards, Wolkoff came aboard.

“They sent it to me, and I completely fell in love with it,” Wolkoff said. “Especially the weirdness, the whimsy, and I can’t go on enough about the look. My TV background is working on franchise properties with deep mythologies, and here was an opportunity to create our own franchise and invent our own mythology – to build an epic world that has real emotional stakes and pathos. Our main character, Kipo, is all about hope and wonder, in a world where most people would just become cynical and bitter. This is the end of the world that we’re doing a show about after all! But what makes it unique is it’s not a bleak apocalypse. It’s a land filled with untold absurdities and wonders, and Kipo, more than anyone, is equipped to see that wonder amid the danger she faces around every corner.”

For Sechrist, whose prior experience was in features as a storyboard artist, this was his first time working on a television series. So, while Wolkoff handled many of the production details, Sechrist focused on the visual design, which initially caused some concern among the animators at Studio Mir in Seoul.

“They were worried about my drawing style because it looks hard to animate,” he explained. “We were going to let them adjust it to a more ‘animatable’ style, but lucky for us, [DreamWorks Animation Television Chief Creative Officer] Peter Gal pointed to a poster I had drawn up on our wall and said something like, ‘I don’t care what you do, as long as it looks exactly like that.’ So, we asked the animators at Studio Mir to just give it a try. It came back looking incredible.” “I learned a lot about the challenges of pioneering a new style, especially on a TV schedule,” adds Wolkoff. “As a first-time executive producer, the most important lesson I learned was communication between the creative team and the animation partner studio. We visited Studio Mir in Seoul several times and videoconferenced with them almost weekly. Also, our art director, Angela Sung, worked closely with Mir to communicate Rad’s style. In the end, the animation far exceeded our expectations.”

Regarding the actual production schedule and team, Sechrist said that, after a script was completed, they had six weeks to board. “We had teams of two directors for Season One, with three board artists and one revisionist on each team. I was used to a feature style of boarding that’s very organic and allows for adding jokes and comedy, so we tried to give the board teams a lot of freedom to add stuff as they wanted.”

Unusually for kids’ animation, because the show is heavily serialized, the scripting process required a full-time writing staff and a writers room going every day, as on a live-action show. Wolkoff credits DreamWorks and Gal for understanding the necessity and empowering them to tell a layered story. “After the first few scripts were written,” he said, “the show really became everyone’s show. Of course, each script was written by an individual first, and then the room had a crack at it together. We strove to create a collaborative process where the writers and board artists would bounce ideas off each other before each episode entered the animatic phase. I owe a special shout out to Kristine Songco and Joanna Lewis, our story editor team, who ran the writers room.” Coming from feature films, the biggest challenge for Sechrist, not surprisingly, was the time crunch. “I was used to spending 4-5 years on a film, so this speed was incredible,” he said. “Luckily we had Young Ki Yoon to supervise the boarding, as well as incredible directors and boarding teams.” He also gave props to Art Director Angela Sung and Line Producer Mike Moragne for their exceptional contributions.

In addition to its highly distinctive visual style and cheery approach to life in a post-apocalyptic world, Kipo and the Age of Wonderbeasts is also distinguished by the way the series incorporates music into the narrative. “We knew that we wanted music to be a big part of what makes Kipo, Kipo,” Wolkoff revealed, “and to find organic ways to have music help tell the stories. Kipo is almost a musical that’s not a musical, and the vibe is very much rooted in our culture today. The writing staff would write song lyrics that composer Daniel Rojas brought to life, and our music supervisor Kier Lehman brought us songs that we used as a needleddrop and unconventional score.”

Summarizing his personal goals for the show and emphasizing why he believes it’s important, Wolkoff concluded, “I thought we could tell a story about whether it’s possible to accept a world that’s forever changed, where everything familiar is now upside down. I think that resonates today especially. I hope this could be a welcome antidote to growing up in a time where it feels like the world really could be ending. And that’s what I was most excited about: the chance to tell a coming-of-age story against this backdrop.”

All 10 half-hour episodes of the first season of DreamWorks Kipo and the Age of Wonderbeasts debut worldwide on Netflix January 14, 2020.