Doug the robot is back, unplugged, and on an adventure to discover the wonders of the human world firsthand; the animated series streams globally only on Apple TV+. 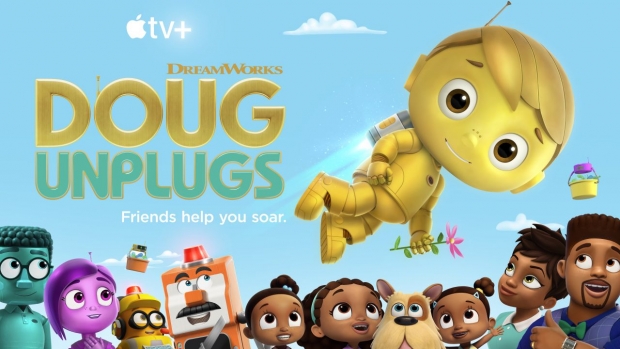 Doug Unplugs is back with all new episodes on Friday, April 2 on Apple TV+. The series, from DreamWorks Animation, is based on the popular “Unplugged” books series by Dan Yaccarino. In the animated series, a young robot named Doug senses there’s more to life than just the facts. While other robots plug in for their daily download, Doug unplugs and journeys into the human world with his best friend Emma to experience its wonders firsthand.

The series, which first premiered in November 2020, will stream globally with six original episodes:

"Bot at the Museum / X Marks the Bot" - Uncle Forkrick takes Doug and Emma to see a big dinosaur exhibit. Doug and Emma make their own treasure when they can’t find any at the beach.

"Kicking and Botting / Bot on the Case" - Emma asks Doug if he and the other robots want to form a soccer team. Emma and Doug become detectives when a puzzle piece goes missing.

"Camper Bots / Bots to Read" -Doug and his family lose access to their technology while on a camping trip. Emma invites Doug and Uncle Forkrick to join her at the library.

"Like Botter, Like Son / Give It a Bot" - Joined by his dad and grandbot, Doug explores a small town while searching for a car part. Emma convinces the robots to play in the snow.

"Where No Bot Has Gone Before! / A Bot from the Heart" - Doug’s Aunt Rover comes to town and talks about her adventures in space. Doug and Bob Bot want to make Becky Bot’s builtday extra special.