A World of Wonders Waiting for Discovery in DreamWorks’ ‘Doug Unplugs’

Based on Dan Yaccarino’s popular book series, the Apple TV+ animated preschool series features a young robot, Doug, who unplugs, and with his best friend Emma, journeys into the human world of adventure. 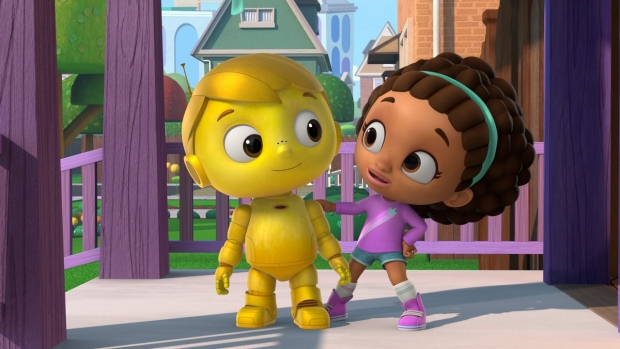 Doug Unplugs, a new Apple TV+ animated preschool series from DreamWorks Animation, premieres its first seven episodes today. The show is based on Dan Yaccarino’s popular “Doug Unplugged” book series about a curious six-year-old robot, Doug, who senses there is more to life than just the facts. While other robots plug in for their daily download, Doug, with the help of his best friend, a human ball of energy, Emma, discovers all the simple wonders of the world.

For Nolan, the show emphasizes the importance of balancing technology and experience. “It recognizes that tech is an increasingly big part of kids' lives; case in point: my two-year-old son already knows how to find videos of himself on my phone,” he says. “So, we're asking our audience to let that technology fuel their curiosity and use it as a catalyst to go out and explore their world. In doing just that over the course of our series, Doug explores and discovers what it means to be human, experiencing themes like friendship, family, community, and imagination. There's even an added ‘green’ message as our robots live and work at a futuristic recycling plant.”

Describing the show’s origin, Theofilopoulos shares, “Dan Yaccarino wrote this wonderful book, 'Doug Unplugged' about a curious robot boy named Doug who learns information by plugging in. He then unplugs and goes out into the world to learn more. Jim [Nolan] joined the DreamWorks development team to help expand and shape Doug's world a little more by adding a human best friend named Emma, lots of cool robots, a recycling or ‘rebooting’ facility called Rebots, and so much more!  I came onto the project to then help shape the world even more particularly in the visual and animation sense, in partnership with Jim and Dan. After DreamWorks shared the book series with Nolan, he instantly connected with the message and the little bot delivering it. “I wrote up a one-pager - probably more like a four-pager, possibly even four-and-a-half pager, might have even pushed four-and-three-quarters if I'm being honest here - for the show, which went through a development process as we expanded and turned it into a series,” he explains. “Then came time to find it a home. We pitched it to Apple TV+ who, to their infinite credit, didn't run from the room as Dan and I literally acted out sections of our pilot script. Once we officially partnered with them, we worked together to continue to develop and fine tune the series. And, of course, Aliki jumped in around then with her boatload of talent and leadership skills in tow. And soon what was once just a four-and-seven-eighths-pager (tops!) became Doug Unplugs!"

“Animation is a long process from conception to release, so it took almost two years to bring this series to life,” Nolan notes about the show’s development process. Like so many other productions, Doug Unplugs had to quickly adapt to the realities of a global pandemic. “Of course, going from working together in a studio to working remotely presented some enormous challenges, but Aliki and I still marvel at how quickly our team pulled it all together,” he adds. “Our leadership at DreamWorks, our amazing line producer, Rachel Curet, and our awesome crew dove in to make a plan and we transitioned from in-studio to at-home TV-making almost seamlessly. There were some final hurdles to jump, like learning how to virtually record with talent - hint: closets make pretty great sound booths. But really, our team always found a solution and we kept on schedule.”

From a design and lookdev standpoint, Theofilopoulos says her team wanted to create a setting where there was a clear separation between the robot and human worlds, where each still had elements of each other’s world to bridge them together. “This included an actual bridge!” she says, before continuing, “For the human world we drew inspiration from Jim's hometown of Pittsburgh - bridge included - setting the show in a perpetual fall palette. For the robot world, we wanted to create this kind of green, robot facility, but we needed to make sure that it felt friendly and inclusive for kids. We brought on Matt Doering, an art director I had worked with on Harvey Girls Forever. He developed a wonderful shape language for both worlds, that we then could house the designs we were falling in love with for both the robots and human characters.”

Considering the show’s combined robot and human world, it became clear a CG world, and CG stage, would work best, though Theofilopoulos notes that “it was important to me personally however, to bring 2D animation principles and elements into the character animation, particularly with Emma, giving her snappy animation poses and timing, and pushing squash and stretch with her model.” She also reveals they knew they’d want to use 2D elements during Doug's plug-in music videos to really highlight the plug-in moments and “push the art direction a little further than they’d typically do during the non-plug-in parts of the episode.” Theofilopoulos goes on to share that, “Creatively, I feel as with any preschool show, there is this wonderful challenge of telling great stories while baking in some great take-aways for a preschool audience. I really feel like the stories on our show are so successful at being entertaining and funny while also being substantive.” She adds that while this is something that “definitely takes a little thought, Jim did such a great job leading his writing team in doing this so well.”

“For the visuals, one of the challenges was making sure we created a CG show that looked like its own thing, from the shape language to the color palette and lighting,” she continues. “We really wanted to make sure a Doug Unplugs show felt like a Doug Unplugs show. This was also true for the animation. We went to great lengths with a fantastic animation team to push it to really feel snappy, have weight, have great acting posing and facial expressions, and great timing. I feel really happy with how the animation, lighting, and look of our show turned out!”

Reflecting on what he hopes audiences take away after watching the show, Nolan says, “I really just want them to have fun watching the series! And hopefully kids will be inspired by Doug and Emma's curiosity and the way it leads them into their adventures - encouraged to ‘unplug’ and explore the world around them too.”

“I really do feel like families will enjoy watching this show together,” Theofilopoulos adds. “There is inspiration to be found in both Doug’s and Emma's curiosity and enthusiasm about the world, and the way they adventure through it, and seeing the everyday through Doug's eyes as he experiences something for the first time. Plus, the show is just funny and fun!” Now that their show is finally premiering, Nolan concludes, “Aliki and I couldn't be happier or prouder of the show. We're so grateful to our amazing crew, leadership at DreamWorks and partners at Apple TV+ for all their talent, insight and belief in our little bot and his world. While the message of balancing technology and experience couldn't be more timely, we're also just proud of how much fun we had making the series... and we hope our young audience has as much fun watching it!”