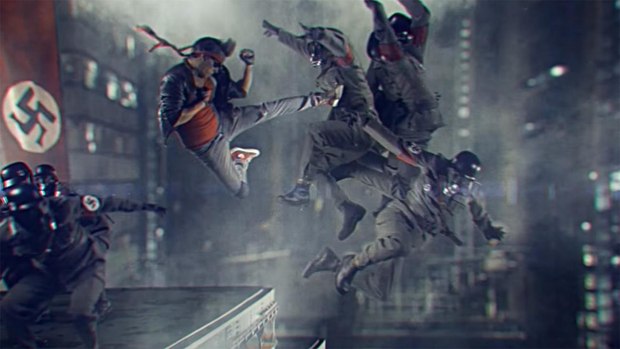 Throughout Kung Fury, the story unfolds in three major environments: a street intersection, a police station interior and a huge steampunk-inspired Nazi hall. Fido created each environment digitally and then integrated the work with live action green screen footage of actors. Given trailer assets originally designed by Sandberg in 3ds Max, Fido transferred the files to in-house Maya workstations and used the assets as an aesthetic guideline to model, texture and refine the film’s environments, elements and main CG characters, including two robots, a Tyrannosaurus rex and an eagle. After finalizing VFX work and compositing, Fido’s crew then applied a specially designed filter to footage to achieve the VHS-reminiscent look that Sandberg envisioned.

“The movie is essentially a 30-minute VFX rollercoaster ride, so we had our work cut out for us, but having Maya as a pillar of our pipeline put us at ease. David also directs with a strong creative vision and deep understanding of VFX, so even though we faced some pretty crazy challenges, it really helped that he speaks the same language we do,” shared VFX Supervisor Cameron Scott. “ All our Autodesk tools were stable workhorses throughout production. Using Maya’s Alembic support, we were able to quickly transfer 3D assets between programs to work efficiently and meet David’s deadlines.”

“There are so many fun, crazy characters, environments and scenarios in Kung Fury that VFX played a crucial role in the story. Because of my background in commercial production, I’m familiar with all the VFX tools and techniques, so I worked closely with Fido on the VFX,” said Sandberg. “I’ve worked with Autodesk tools for a while now, and they’re some of the most best 3D modeling and animation tools out there. With outstanding creative talent like Fido behind the wheel of software like Maya, almost anything is possible, and that’s evident in the VFX they delivered for Kung Fury.”